REVIEW: In Heaven and Earth by Amy Rae Durreson 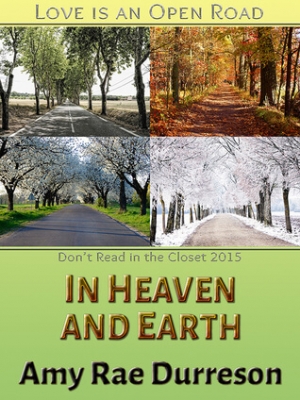 The MM Romance Group on Goodreads has an event every year (I think it’s every year), where readers post a photo and some information and an author in the group uses those things to create a short story which is then edited, formatted and posted online for free. The theme for the latest round of novellas is “Love is an Open Road”.  I saw some of my Goodreads friends were and loving this one so I downloaded it (and quite a few others). There are some brilliant stories available and as they’re all short (though some are longer than others) and free, they’re pretty low risk. It’s actually a great way to discover new authors.  Some of the photos are NSFW and some of the prompts are more detailed than others. The prompt in this case was quite detailed (readers can view the photo and prompt here) and I wondered at first whether it might have been so explicit as to be restrictive. But what you did with the base information impressed me very much and I have no doubt this story is entirely your own.

Reuben Cooper is a doctor aboard the medical explorer Juniper. On completion of a tour of duty, he and the other crew members head to Caelestia for resupply and some downtime. When they arrive, everyone is dead (but not by any apparent violence), the space station (created from a hollowed out asteroid) is leaking atmosphere and the only survivor they find is a cyborg who is so traumatised that his short term memory has been affected. He repeats, on an endless loop “it could happen again“.

The Juniper‘s crew are tasked with finding out what happened on Caelestia. Is this event something which could actually threaten other space stations? Can it be stopped? What does the cyborg know? How can the crew find out quickly and, if possible, prevent further disaster?

The cyborg is Vairya. He is a unique and rare specimen indeed. He was one of a few cyborgs which were created on the Original Earth, as a repository for all human knowledge and history. Not all of them made it out of Earth and those who did have not all survived.  Human civilisation is now spread out across various settlements, planets and space stations and the only memories of what was are held in the minds of Vairya and his few remaining counterparts (situated elsewhere in the galaxy). On Caelestia, Vairya is a gardener. This fits with his designed mission to preserve knowledge peacefully – he does not have a warrior’s constitution.

In this civilisation, cyborgs have the same rights as humans and in many ways, Vairya is as human as Reuben, particularly in the ways he feels and expresses emotion.

Reuben is relatively new to the Juniper. He has what I feel is a very deep and complicated backstory – the essential information is provided in the story, but I had the sense that you know more about it than what was on the page. That kind of richness is such a gift to me; I love the idea that the world of this novella is far more than what I can see so far. I feel confident that you have a complete handle on the world you have created here and that makes me feel quite safe as a reader venturing into new territory.

Nanotechnology was the downfall of Original Earth but is the only possible means of obtaining knowledge buried in Vairya’s damaged memory in a short space of time. Reuben volunteers to undertake this risky procedure for a number of reasons; he is a medical doctor and Vairya is his patient; he has less to lose than other crew members who have family waiting for them. Somehow, and I’m not exactly sure how, the injection of certain nanites into Reuben allows him to connect in a kind of dreamscape with Vairya. The connection is entirely imaginary and you go (briefly) into the physics of it and the mental discipline required. My sense was the connection made between Reuben and Vairya at this level was quite unique and definitely contributed to their later romantic connection.

That said, the (relatively small) portions of the story in that dreamscape were the least successful for me, possibly because I had a bit of a hard time jumping from high-tech space stations to medieval tourneys. Even so, I appreciated how you created a sub-world where you could literally do anything you wanted and it would make sense.

Reuben is a good man who has been broken by his past. When the story begins he is and outsider among the crew of the Juniper. During the course of the novella, he reveals to Vairya and to the other crew members exactly who he is and he forms meaningful connections with more than just Vairya.  In a short word count, you created characters with more depth and personality than I’ve read in some full length novels.

The romance between Reuben and Vairya is necessarily fast but I believed it because the uniqueness of their situation and the singular experience they have in the dreamscape. Vairya is a nurturer – of information, memories, flowers and people and is exactly who Reuben needs.  But if they are to have any kind of future, they must somehow defeat the threat which Vairya’s memories have revealed is as bad as things can get. The crew of the Juniper is on their own – quarantine is the only hope the rest of the humans have and it appears they are all doomed.

There’s a big clue in the fact that this is a romance, but how the HEA/HFN is achieved is unique and fits neatly within the story.

Because of the various settings in the book, there are elements of medieval-type fantasy and science fiction as well as romance. The stakes are high and the sacrifices Vairya and Reuben make (not to mention the other crew members who all have important roles) are moving and ramp up the tension – if it weren’t for the fact that I knew it was a romance, I’d have been very, very worried. As it was, I had a few nervous moments. Taking a story and characters to the brink of destruction and bringing them back to a happy ending in a way that makes sense is a particular skill and you demonstrate it here.

I liked the diversity of the characters, something which was apparent but not made into a “hey, look at me, I’m diverse!” thing and I loved the story – which was moving and scary and also triumphant in a number of ways.

Some of the Love is an Open Road stories have unique covers which fit the story, some of them have the generic event cover. In Heaven and Earth is one of the latter. The cover is pretty terrible actually for what the story is. But I’m very glad I wasn’t put off by it. Behind that very ordinary cover is a little gem. And, did I mention, it’s free?

In Heaven and Earth is availble to download free in all formats here.