REVIEW: In Bed with the Boss by Susan Napier

Update: I am reposting this review given the book I read a week ago. I wanted to highlight the story and why I enjoyed it tremendously.

I was delighted to see that Harlequin was digitizing your backlist titles. It’s something I’ve longed for since their digitizing efforts began a year or so ago.   I have In Bed with the Boss in its paper form, bought used from an online store.   I happily replaced the print with the digital version. 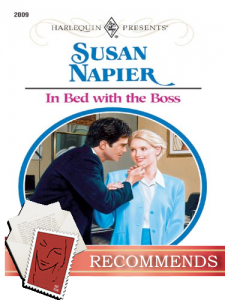 The book was originally published in 1999 and in the descriptions of the clothing and the era, it is dated.   However, I found the flamboyance of the hero’s dress, in particular, to be so fun to read about that the dated aspect only added charm to the story.

Part of the fun with In Bed with the Boss is that the reader is in on a secret.   That is, we know that Duncan (the boss)   is in love with Kalera (the secretary), but she is willfully or unconsciously blind.   Seeing her awaken to this is part of the pleasure.

Kalera Martin has been secretary to Duncan Royal, the owner of a multi-million dollar tech firm, for three   years.   She tenders her resignation because she is about to marry one of Duncan’s fiercest rivals, Stephen Prior.   Duncan is enraged because he has been waiting until Kalera had recovered from the death of her husband before he made his move on her.   The idea that he missed the window and that she is marrying a hated rival motivates him to ruthlessly pursue Kalera.   Kalera has no idea that Duncan has these feelings although she did share one lonely night with him long ago that she has tried to repress and forget.

Duncan is described in such a way as to plant him firmly in the metrosexual category. He has   “lean, manicured hands”. At one point he is described as wearing a “velvet jacket cropped like a matador’s, the wide lapels and cuffs stiff with flamboyant gold embroidery.”   He wears an earring, one with an “elongated jet and chased gold teardrop.”   Duncan, in some ways, seems like the dandies of the late 18th Century–all fabulous dress and ferocious masculinity.   You even acknowledge this:

A stud or ring was a fairly ommonplace declaration of modern macho cool, but the wickedly frivolous elegance of that dangling earring made an entirely different statement. It was the sort of exquisite piece of jewellery that a languid Elizabethan fop might have worn-or a modern rock-and-shock star!

The earring scene is brilliant.   It shows Duncan’s anti establishment side, Kalera’s helpless attraction to it, her instinctive resistance, and, of course, the boring staidness of Kalera’s fiance.

Duncan’s force of personality is testosterone laden in spite of his velvet covered body.   Kalera describes him as having a near psychic force of personality.    When Kalera notes that she didn’t know he had his ear pierced, Duncan admits it was recently done:

Kalera notes that the earring suits him:

The feminine delicacy of the piece presented an exotic contrast to the hard planes of his face and the square jaw shadowed by masculine stubble. But Kalera would die before she admitted it.

Conveniently, the reader then gets Stephen’s opinion and given that Stephen is boring and wrong for Kalera, you instinctively build on the idea that Duncan’s flamboyance is all the more attractive because who the hell wants to agree with Stephen?

“I think it looks freakish,’ said Stephen tightly, the words spilling out from behind his rigid control. “But then it’s typical of you, isn’t it, Duncan? Always some outlandish stunt to draw attention to yourself. You’d better be careful: one day people are going to figure out that you’re more show than substance.’

Duncan pursues Kalera all out, using every weapon at his disposal.   It is all fair to Duncan.   He works Kalera through lunch and late into the night so she cannot see Stephen.   He figures out where Kalera and Stephen might be dining and invites himself to dinner.   At one point, he hijacks Kalera and a part of his staff and takes them to a remote estate with the excuse that his top secret project will be better protected if they work in isolation.

Kalera is no mild mannered miss either.   She pretends to be impervious to his rages, which just feeds Duncan’s temper. The reader knows that Kalera could wind Duncan around her finger if she wished.   There’s signalling from the opening pages of the power that only Kalera has over Duncan (only she isn’t aware of it until later).

What I particularly appreciated was that there is no actual villian in this story. While Stephen might have been boring for Kalera, he was the right man for someone else.   Kalera was a widow and her now deceased husband was honored in every mention, particularly by Duncan. The reveal at the end regarding Duncan and Henry, the former husband, and their relationship was novel and touching.   I can’t remember another like it.

This book is such fun to read and I loved the ending.   I am so glad that it is out in eform so everyone can enjoy it.   B+