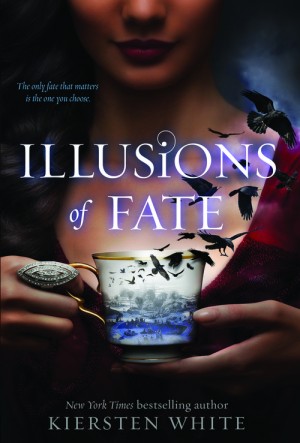 Your latest novel, Illusions of Fate, is a departure from Mind Games and Perfect Lies, a duology about a pair of sisters gifted with special powers that make them ideal for espionage. Instead, we go to an alternate world reminscent of Victorian England. Except filled with magic.

Born on the island of Melei, Jessamin has gone to the country of Albion to get an education. Of course, it’s not so easy. Melei is under the colonial control of Albion, and Jessamin herself is the result of a union between a Melei woman and a visiting scholar from Albion. To no one’s surprise, the scholar couldn’t care less about them but Jessamin’s mother still hopes the man remembers them. Jessamin is more practical than her mother. She doesn’t want any sort of relationship with the man — except she has no problems blackmailing him into helping her gain admission into the university. The professor has a wife, you see, who has no knowledge that her husband has an illegitimate daughter with a foreigner. This fact right here was more than enough to cement my affection for Jessamin as a heroine.

Being biracial — and visibly so; no passing here — Jessamin is the target of racism and bigotry from her peers. This is why she causes a sensation when she attracts the attention of Finn, a young noble of Albion who has recently come to the city. Even more startling is when he “shadows” her — his shadow leaves his body and attaches to hers, granting Jessamin two shadows. This is the equivalent of a soulbond. Some people are scandalized. Some people are entertained. Finn sets out to win Jessamin. And Jessamin just can’t be bothered with all this nonsense.

But it’s not all fun and games. Finn has enemies among the Albion peerage. Albion, you see, is torn between minding its own business or expanding its imperialistic designs even more. Finn has managed to prevent the latter from happening but when he shadows Jessamin, a rival on the opposing side finally sees a chance to leverage the young lord to change his mind. Jessamin has no magic so you’d think this would leave her out of her depth. Thankfully, she’s very clever and doesn’t see why Albion social boundaries should restrict her as she isn’t from Albion at all.

This was a really charming book. I really liked Jessamin as a heroine. It was refreshing that despite the fact she found Finn very hot, she was dubious about his intentions. This was in line with her background — her mother got taken in by an Albion gentleman who used her and left her, and she had no intention of suffering the same fate. It was nice to see a YA novel touch on the effects of colonialism and imperialism, both on a larger level and a personal level.

I adored Eleanor. She was a great supporting character and ally for Jessamin, who gets catapulted into Albion’s upper society thanks to Finn’s shadowing her. I thought she was hilarious and brave despite the pressures put upon her by everyone else.

Overall, I thought Finn was all right. Not an asshole in the slightest. That said, I admit that I thought less of him when he made it all about himself about Jessamin’s reticence about reciprocating. So what if he’s not racist and doesn’t care about the color of her skin? I’m happy for him. But he has to think about what it means that his non-racist views are extraordinary in this society, on top of realizing that sure, maybe he’s not racist but Jessamin will have to live her entire life dealing with bigoted perspectives. No amount of his love is going to cancel that out. Sorry, it’s not enough. It’s believable that he doesn’t realize the structural racism inherent in society — he’s only 19, after all. But I would have liked to see more pushback against his defensiveness, and less Jessamin capitulating to his side. She has a reason to be defensive. Her mother’s story is far more common than Jessamin’s, after all.

I really enjoyed Illusions of Fate. Your writing style is so comfortable, that it’s easy to sink into the story. I loved Jessamin as a heroine, and I loved that even though she was ostracized by the color of her skin, this didn’t mean she had no female friends or allies. The romance was sweet, and I admit I was charmed by Jessamin’s crow friend. Add in the exploration of colonialism and imperialism, and I’m all yours. Can’t wait until your next book. B+