REVIEW: If I Was Your Girl by Meredith Russo 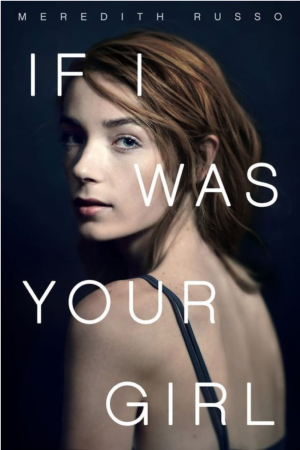 I saw If I Was Your Girl listed here as a Daily Deal not too long ago and I snapped it up. I was even more delighted to find that this YA novel about a trans girl in her senior year of high school was written by an #ownvoices author. It’s not that I’d be unhappy to read a book with trans characters written by a non-trans author but there is something extra pleasing to me when a book has… let’s call it an extra layer of authenticity. I mean, you’re a trans woman so I figure you know what you’re talking about. I also appreciated your author’s note in the back of the book which clearly stated that you made a number of conscious decisions about Amanda’s character in order to remove possible barriers for a cisgendered audience (for instance that she “passes as a woman with little to no effort”) and that you explained that trans representation is not a monolith and there are as many different types of trans men and women as there are cis men and women and all are worthy and beautiful just as they are. FWIW, and I’m a cis woman so I’m not sure it’s worth all that much, I think you explained yourself well and I understood that Amanda’s journey is but one story among many.

Amanda Hardy is just beginning her senior year of high school. After being beaten in a women’s bathroom by some local boys, she moves to in Lambertville to live with her father. No-one knows Andrew Hardy there so Amanda can be herself without necessarily being terrified that she will be attacked by transphobic bullies. She hasn’t seen her dad for a number of years, since he separated from her mother. Amanda’s dad didn’t cope very well with having a son like Andrew, who liked to wear girl’s clothes, who didn’t like sport and who seemed to him to have a label on his forehead saying “bully and attack me”. This led to tension between Amanda’s parents and eventually, Amanda’s mother took Amanda and they left.  In the intervening years, things haven’t been easy for Amanda – in fact things got so bad she even attempted suicide. The good news is that Amanda (obviously) didn’t die and her cry for help led her to a support group which really helped, sympathetic friends, counseling and, after she turned 18, transitioning via hormones and surgery. Her mother is very supportive but Amanda’s home town isn’t a safe place for her since she started living openly as a girl.

In Lambertville, Amanda quickly makes friends with a rather diverse group of girls and, she draws the attention of a handsome boy, Grant Everett. She is initially very reluctant to start anything with Grant. Her plan had been to live pretty much under the radar and escape to college in New York after graduation. New York, she feels, will be a more accepting place for her.  But Grant is able to convince her otherwise.

“Everybody’s got a past,” he said. “That don’t mean you can’t have a future.”

“Okay, but there are a lot of things you don’t know about me.”

“I know you’re one of the prettiest girls I’ve ever seen,” Grant said, leaning even closer. “I already know you’ve got a good heart. I know when we kissed I felt warm all over, like when you sit too close to a campfire, and I know no girl’s made me feel that way before.”

The romance is very sweet. Grant’s life is not uncomplicated either – both have their vulnerabilities and strengths. I appreciated that Grant had depth to him and wasn’t there as a foil for Amanda. And he had some very romantic lines. I liked him very much.

“Yeah,” Grant said. I realized he was staring at me. “You make me feel that way a lot.”

Even so, it is very much a story, at heart, about Amanda learning deep down that she is okay. That’s she worthy and beautiful and the most important thing is that she’s living life as her authentic self. It helps, no doubt, that she is actually physically beautiful but still.

Over the course of the story, Amanda opens up to one friend, a move which will have some far reaching consequences for her.

I don’t think it’s a spoiler to say that eventually, Amanda is outed. This isn’t a book where Amanda’s trans-ness is but one aspect of her character and the plot is about other things (although I like those too). While, of course, Amanda’s trans-ness is indeed but one aspect of her, that she is a trans girl is front and centre to the novel. What she thinks of herself and how others perceive her is very much the story. So, of course, people were going to find out. There is perhaps a touch of melodrama about this event (but it’s fiction and a story does need a black moment so I gave it a pass. And maybe it’s not as melodramatic as all that unfortunately because people can really suck) but there are also people who surprise Amanda in a very good way. One of them is her dad. The way they learned to relate to one another; how he moved to a place of acceptance and began to embrace her as his daughter, was really lovely.

If I Was Your Girl is not a romance. [That’s a hint everyone.] As far as the romance goes, it has an ambiguous ending. I understood the point of it was that Amanda knew she was going to be okay either way but I can’t say that my romance-loving heart wouldn’t have enjoyed another chapter and a HEA/HFN. Still, it had a generally hopeful upbeat, ending. While I was a little disappointed I didn’t cry about it either. [I just imagined that chapter I was missing!]

I’ve read a few other books with trans characters and I’ve enjoyed them. I think books like these are so important, both for trans girls to see themselves represented in fiction but also for cisgendered people to learn in a “safe space” about what it might be like to be trans. And when I say “safe space” I mean that ignorant assumptions can be challenged and useful information provided without anyone having to be hurt or embarrassed (whether trans or cis) in the process. Exhibit A:

“I’ve seen trans people in movies and TV shows, but judging by how unrealistic and shitty bi characters tend to be, I’m gonna assume I know nothing. So what’s okay for me to ask?”

“Don’t ask about my genitals,” I said, balling up my skirt and looking up at the clouds. “Just don’t.”

But, more than that, If I Was Your Girl was a damn good story. I liked the way you told it and I liked Amanda and her group of friends.