REVIEW: I Was Here by Gayle Forman 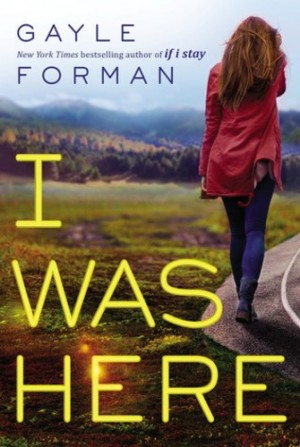 While I wasn’t so keen on Just One Day (and subsequently didn’t read Just One Year), I liked If I Stay and absolutely loved Where She Went. It’s the strength of the last book that had me pick up your latest; I Was Here sounded more reminiscent of your earlier works. And my hunch proved correct.

Cody and Meg have been best friends forever. They grew up together, laughed together, and dreamed together. But then Meg went off to college, leaving Cody behind in their small hometown. The separation was hard on Cody: she missed her best friend, but she also hated Meg a little bit, too. For daring to make good on the dreams that Cody did not.

That all changed when Meg commits suicide, leaving her family, Cody, and her friends to pick up the pieces. No one understands how Meg could have taken her own life, least of all Cody. But when Meg’s parents ask Cody to go to Meg’s college to sort through and pack up the things their daughter left behind, she begins to try.

While I Was Here tackles a heavy topic, I wouldn’t categorize it as an issue book. Instead, it’s a story of friendship, loss, guilt, grief, and learning to move on. It’s a very powerful book, something that combines the very best qualities of If I Stay and Where She Went.

Though she didn’t have many close friends, Meg was the It Girl. The one with the larger than life personality, the one everyone admired and wanted to be, the one who somehow always made things work. Cody pretty much lived in her shadow, although she never resented it. Not until Meg left for college, and that’s when the fissures in their relationship start to show.

Cody’s the type of character I wish we’d see more often in new adult books. She doesn’t go to college due to financial reasons. She comes from a lower class background that’s not glorified or played up for kicks. It just is. As a result, she’s stuck in a town where so few people actually leave — which is why Meg’s leaving for college was so momentous. She cleans houses to earn money, which is certainly not a glamorous job. Cody just feels very real to me.

I also found Ben to be a very real character — not a perfect guy by any stretch of the imagination. A member of a rock band, Meg befriended him because she loved music and like many girls before her, Ben eventually slept with her. And like the other girls, he left her because he doesn’t know how to be friends with a girl. In another book, Ben could have been the bad guy, the one responsible for breaking Meg’s heart and driving her over the edge, but that’s not it at all. Instead, he’s just a guy who caught the tailend of Meg’s life and feels helpless guilt over it.

While I found Cody’s search to figure out what could have driven Meg to kill herself to be a reflection of her internal grieving process, I actually found the unfolding relationship between her and Ben fascinating. It was like looking at the cliche romance trope of jerk rocker and smalltown girl through a funhouse mirror. Ben’s a jerk at the beginning. One of those stereotypical rock guys who leaves a string of one-night stands behind him. But Meg’s suicide touched him and meeting her angry, unforgiving BFF who saw right through him changed him again. Although the book is told solely through Cody’s POV, you still catch a glimpse of him changing from the douchebag we meet in the beginning to someone who drops everything for Cody because she calls him. Despite the screwed up circumstances under which they met, I found myself hoping they’d find a way to make things work.

I’m really glad I picked this book up. I waffled initially because I had such opposing reactions to your previous duologies, but this book restored my faith. It’s a powerful story about loss and forgiveness, but I will caution that suicide is talked about frankly and explicitly so perhaps it warrants a trigger warning. B+