When your debut novel, Ash, was released to much fanfare and acclaim, I snatched it up and read it with excitement. So I was a little disappointed to learn that I didn’t seem to love it as much as everyone else did. I figured it just wasn’t for me — too much fairy tale, not enough adventure. But when I saw the cover to your follow-up novel, a prequel to Ash, I decided to give your work another try and I’m very glad I did. 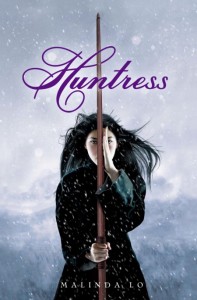 Huntress is the story of two girls: Taisin, a gifted student well on her way to becoming one of the best sages of her generation, and Kaede, her fellow student who is anything but talented in the mystical arts. Their world is on the verge of catastrophe. The sun no longer shines upon the land, so crops are dying. Monsters are appearing, which is a threat the general populace cannot handle.

Because of this, the oracles are consulted and it is determined that Taisin must embark on a dangerous mission and travel to the court of the Fairy Queen. For once there was a compact between man and faerie, and it is time to renew that treaty. Perhaps by doing so will the world of men be saved. But before being told of her mission, Taisin had a vision of Kaede rowing towards a land of ice and she knows that she will not embark on this quest alone. Kaede’s destiny is tied with hers.

This was a delightful book to read. It breathes life into the classic fairy tale structure of two girls being given an impossible task, “competing” with each other to accomplish it, while being beset with numerous obstacles along the way. It was a nice combination of romance and action, which is something I enjoy.

I thought the portrayal of the relationship between Taisin and Kaede was excellent. Here we have two very different girls thrown together on a dangerous quest. Kaede comes from a political family, her father an important court official; she has known the prince since they were children. But her father thinks her studies are a waste of time and would rather she marry someone of his choosing in order to cement alliances. Kaede resents this. She may not be the best student at the academy, but she’d like the opportunity to make her own choices.

On the other hand, Taisin has only ever thought of becoming a sage. It is her life’s goal and she has the abilities to prove it. But her vision of Kaede throws her into a confusing spiral in ways that being assigned this mission does not. Because the vision was accompanied by feelings, feelings she doesn’t completely understand and that are forbidden to her by her life’s path. I liked seeing Taisin thrown out of her element, made awkward by what her vision predicted, and Kaede reacting to it.

It raises an interesting question. It used to be a fairly common trope in traditional fantasy for a character to have a vision of their future one true love. Those characters would then embark on a quest to find that love or wait for that love to come to them, searching the faces of everyone they meet. Huntress shows us another side to this. Taisin never intended to fall in love, so discovering that she develops feelings for someone is unwanted, to say the least. She starts from a point of being unreceptive to love, let alone being in love. So the journey to the land of the Fairy Queen is as much about Taisin opening herself to these feelings as it is about reaching their destination alive and in one piece.

I personally found the prose in Ash to be a little choppy, which is something I tend to expect from first novels, so I was pleased to see those rough edges smoothed out in this follow-up:

Taisin remembered the way it had felt when she pulled life into that tiny purple blossom, the torrent of energy through her body; she remembered the way that power rippled through Elowen like molten ore, hot and precious. This was even more exquisitely immediate; there was nothing between her and dizzying sensation. Here was the touch of Kaede’s fingers on her skin, and there the soft insistence of her mouth. Taisin felt as though there were a thousand purple flowers blooming inside her, a sea of them, each opening her black eye to the sun, trembling to see the wide-open sky.

I enjoyed the adventure plot. I feel like I don’t see as much adventure fantasy these days, which is a shame because it’s one of my favorite subgenres. I do think the final part, after Taisin and Kaede deal with the threat that’s been throwing their world out of balance, was a bit rushed and tacked on, but overall it was an enjoyable ride.

I thought the connections to Ash were a little tenuous so I don’t think reading that book is a requirement for reading this one. Huntress stands fine alone, which I know is something many readers worry about in this era of neverending series. I also thought the Chinese influences were more subtle — more a function of philosophy and magic systems rather than anything more blatant — so less-versed readers might miss them. They are there, though.

Overall, I really enjoyed Huntress. While not based on any one specific fairy tale, I loved seeing the fairy tale quest brought to life and watching Taisin and Kaede’s relationship unfold. B+