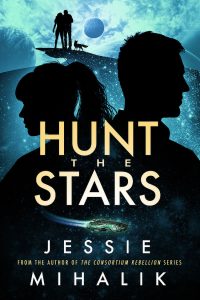 The DA reviewers had a conversation post recently about the enemies to lovers trope and whether we liked it or not, when and why. I’m generally not a fan of the trope in contemporary romance but it works well in SFF because the stakes are often believably high. Which is precisely what we have here.

Set in some unspecified future time when humans have colonised space and the Federated Human Planets (FHP) have been at war with the Valovian Empire – wherein lives a humanoid race known as Valoffs, who have extrasensory powers such as telepathy and telekinesis in varying degree – Hunt the Stars begins some time after the war has ended but when the wounds of it are still fresh. As is the case with many wars as best I can tell, mostly there are losers rather than winners – and here, a truce was eventually reached which kept things at the prior status quo rather than continue to fight and get basically nowhere.

Captain Octavia (Tavi) Zarola is now a bounty hunter with her own ship, Starlight’s Shadow. She served in the war and became known as the “hero of Rodeni” although Tavi doesn’t believe there was anything heroic about it. Half her squad perished in the battle and immediately after the remainder of them made it safely back to base they all resigned their commissions. Still, PR narratives being what they are, the moniker has stuck and for reasons, she is unable to do anything to counter it.  Tavi’s crew consists of Kee, her systems engineer and Eli, her first officer. They served together during the war and are family to one another. Tavi also has a “burbu” a kind of cross between an arctic fox, a ferret and a cat. Luna adopted Tavi after she rescued the Valovian native animal during the war. Luna likes to scam extra meals from people, plaintively pretending she has not already been fed – as a pet owner this sounds familiar!

Tavi is approached by a group of Valoffs to accept a commission. She does not want to – the leader of the group is General Torran Fletcher – a powerful telekinetic and equally famous soldier from the Valovian side of the war. Torran offers her a deal she cannot refuse however – more money than she’s seen in ever – which would give her a chance to undertake necessary upgrades and maintenance to her ship and to tuck the rest away for when work is scarce – something that happens fairly often. Torran is accompanied by Varro, Chira and Havil and for the duration of the contract, they will join Starlight’s Shadow and accompany them wherever the search takes them – which initially is Valovia.  Before leaving, Tavi adds a mechanical engineer to her crew – Anja and they plan to collect Lexi (a private contractor who was a member of their squad during the war) on a nearby planet on the way to the Valoff home world and seat of their power.

The commission offered to Tavi is to find “something that was stolen” – what, why and how are things which are revealed as the book progresses – but the first part of the mission is to try and build some trust between the two groups and cobble them together as a crew. The first half of the book focuses on this as they journey, via a series of wormholes at various space locations, to Valovia. As they cook, clean, spar and travel together, the two sides find things in common and various romantic sparks fly – and not just between Torran and Tavi. There’s plenty of mistrust to work through however and various setbacks as information is revealed which changes the picture. All of the crew have a part to play in the adventure story and each has a distinct personality and arc – albeit that some are more truncated than others. Hunt for the Stars is setting up the entire series and introducing a relatively large cast (another member, Nilo, joins it once the ship arrives on Valovia. Notwithstanding that he’s only in half the book, he’s a pivotal character) so I found the beginning a little slow and at times clunky as backstory was laid out.

Tavi has few character flaws – perhaps exaggerated by the book being told from her first person perspective – but I liked her regardless (and let’s face it, there are quite a few romance heroines who fit this mold so it’s unfair to suggest this book is unique in that respect). I thought her assistance to Anja at the beginning was mainly to show readers that she is a morally upright character and was a bit heavy-handed.

However, as the story progresses, all of that smooths out. The characters become more interesting and three dimensional and the story picks up in pace.  By about the one third mark, I was well and truly invested and enjoying the group dynamics and the early sparks of romance but the book became exponentially better again once they arrive on Valovia.

There were some reveals  in this section which I didn’t see coming but which made perfect sense in hindsight. (It may be I’m just a reader who tends to take things at face value and so didn’t look hard enough but I suspect I was supposed to feel this way). The stakes increase and questions about Torran’s true motives and what really happened on Rodeni are answered.

The found family aspect is an important part of the book. Each character belongs and is valued for their contribution to the wider team. In some ways this almost eclipses the romance.

It is well over half way before there is much more than a suggestion of mutual attraction between the main protagonists and consummation occurs very late in the piece. I mean, it makes sense; at the start, Tavi and Torran are essentially enemies and it’s a long way from that to a HEA. This book does have a distinct beginning, middle and end but the romantic relationship is still in its infancy. The book does end in a firm HFN though (which I believe will become a HEA by the end of the series). I’d described Hunt the Stars as a space adventure with romantic elements and it works really well viewed through that lens. I see from your blog, that the next book in the series, Eclipse the Moon, has Kee as the POV character but I expect there will be more about Torran and Tavi in that story, just as the beginnings of Kee’s own romance are seeded in Hunt the Stars.

From what I can tell the broader “mission” of the crew of Starlight’s Shadow forms the arc of the series and within that there will be (I guess?) three books with three different heroines as the main POV character. My speculation is that Lexi is up after Kee.

The back half of the story in particular is full of tension and risk, with daring escapes, personal sacrifice and grand gestures. After a slowish start, Hunt the Stars turned out to be a great read and a lot of fun and I’m keen to see where the rest of the series takes me.