REVIEW: How to Misbehave by Ruthie Knox

Your 30,000 word novella, How to Misbehave, charmed me to my toes. How to Misbehave takes place in the college town of Camelot, Ohio, in the year 1999. This then is Amber’s opportunity to flirt with Tony and see if he’s interested in her. Amber knows it, but she is as afraid of this chance as she is glad to have it. 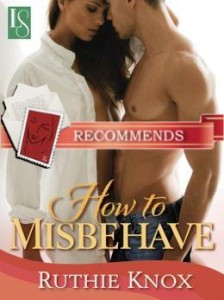 Not only is Amber a squeaky-clean, fresh-faced 24 year old who graduated from a Christian college, her two experiences of sex were both disastrous. Tony, on the other hand, is trouble, or so she has been told. Amber is afraid her life will atrophy from too much good behavior, but she doesn’t know if she can handle Tony, or even get up the nerve to ask him to teach her how to misbehave.

Tony is aware of Amber’s crush on him – his younger brother, who works with him, has been teasing him about it. Tony is also attracted to Amber, and as they seek shelter from the tornado in the basement, he grows more conscious of that pull.

So Tony flirts with Amber, but he has no intention of following through on the flirtation. It seems like a bad idea to actually take Amber to bed since Amber wears her dewy-eyed youthfulness on her sleeve to a point where Tony calls her “bunny.” At 28, Tony has nothing to offer someone as sweet as Amber, or so he believes.

But when the storm knocks the power out and the basement goes dark, Tony is defeated by something unexpected: his fear of the dark. For Tony, the dark is scary, and Amber’s voice, her conversation, is the only thing that keeps his panic attack from blossoming into complete terror.

For Amber, the dark is liberating in that it allows her to claim aspects of herself that she has repressed or shut away. Amber knows what people see when they look at her exterior isn’t who she is, and she wants to be the person she feels she can be– someone bolder, stronger and more directed than she has been until now – both externally and internally.

Amber introduces the topic of the difference between people’s exteriors and interiors, and Tony grasps it like a lifeline. In the darkness, Amber feels safer and braver, Tony more vulnerable and open, and this forges a connection that leads them into each other’s arms when the lights come back on.

But Amber still has those painful experiences of sex to contend with, and there is something in Tony’s past that he has not shared with Amber, something he still carries with him and which may come between Amber, Tony, and the happiness they could find together.

How to Misbehave hews to romance tropes that have been around for a long time, yet it manages to read like something fresh and new. As I was reading, I reflected on the reasons for this, and I think they have to do with specificity of detail and a willingness to go to places that we or people we know have gone, places where the genre itself rarely ventures.

Take, for example, Amber’s sexual past. Amber is cast by Tony and to a lesser degree, by the fact that this is the story of how she learns what sex can be like with a good lover, in the role of the innocent. A common enough trope, though Amber is not a virgin (She has had sex with two men, and both were traumatic experiences in different ways).

This too is not new in romance – the heroine who hasn’t achieved orgasm in intercourse due to a traumatic sexual experience. But when this comes up in the genre, it generally has to do with rape. That isn’t the case here. I don’t want to spoil all the details for readers, but one detail revealed early on in the story is that Amber’s first sexual experience was with a fellow student from her Christian college, a boy who felt that premarital sex was sinful and who cried after they did the deed.

As someone who has been reading romance for a long time but hasn’t read that many contemporaries, I found this background thrilling because it reflected a type of sexual experience I haven’t come across in a romance before.

I don’t want to go into the nature of Tony’s own trauma, since it’s revealed quite late in the story, but his too was something that fell into the spectrum of human experience but that I haven’t often seen depicted in the pages of a romance novel. That description also fits some of the smaller details of the story, such as Amber’s living arrangement (she lives in an apartment complex owned by her parents) or her degree (Sports Management).

I did have a few niggles. One was that except for a brief mention of Y2K, the time period aspect of the setting isn’t utilized much. The story could just as easily have been set in 2013, and that was a bit of a disappointment.

Another issue was that although Amber gained in confidence and her hang ups in bed were resolved, her hang ups outside of bed were not completely. At one point, in a moment of unhappiness, Amber thinks, “There were word for […] what she’d done, too. Spread for him. Slut.”

This comes pretty late in the novella, and while it makes sense that someone with Amber’s background would look at it that way, I would have loved to see her grow further past this self-shaming view. It’s unlikely, but I hope to get a glimpse of something like that in the upcoming novel, Along Came Trouble, the story of Amber’s younger brother.

Also, while I felt I knew Amber quite well (and loved her, too) by the time the novella ended, I had less of a bead on Tony. His backstory indicated that some early experiences led him to behave irresponsibly, but the irresponsibility went on into early adulthood and I felt that there had to be something more that led to it than just what we were told about. I found myself feeling curious about the dynamics of his family prior to the tragic event that changed his life.

Even though this kept me from loving Tony quite as much as I loved Amber, I thought he was pretty wonderful with her. The sex scenes between Tony and Amber were smoking hot largely due to his generosity and sweetness, and I loved that he was such a good guy yet still had something significant to angst about.

I also loved the themes. One great theme was how hard it is to “misbehave” to the right degree. The novella made it clear that acting out in excess can lead to bad things but too much “good behavior” can also lead to bad things. The just right amount of “misbehavior” that Tony and Amber found with each other was liberating to them both and made them click as a couple.

Another terrific theme was that of exterior/interior and the importance of matching the two to achieve congruence, integrity, and a full life. With Tony, Amber learns to be more true to her confident inner self. With Amber, Tony learns to give himself permission to be happy.

Like your novel About Last Night which I read and loved last year, this was a buoyant story. I will be rereading it, I think. B+.