REVIEW: How to Lose a Duke in Ten Days by Laura Lee Guhrke 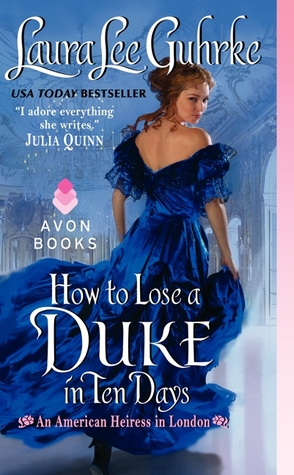 A historical romance heroine traumatized by sexual assault is a rare and challenging plot line. We see it in contemporary romance with frequency, but in the land of manners and repressed inhibitions, where there’s an unwed duke allotted to every good soul in the British Empire (and the emancipated colonies), this type of heroine is in short supply; much shorter than reality had it, I’d bet. We see virgins, scandalous mistresses, virgins, merry widows, unmerry widows, and more virgins. We hardly ever see a rape victim among the marriagable flock of young women vying for matrimony with a peer of the realm.

I’ve read too many tales where the writer makes the assumption that, after the heroine is raped, this is her defining characteristic. She is now a broken woman. Let’s write a solemn story about how she triumphs. Okay. That has its place. But it also makes me feel terrible. This novel was different. While the matter was treated with appropriate gravity and direct honesty, it didn’t eclipse everything else in the novel.

It’s a tricky balance, but your novel managed to maintain a breezy charm. This was not a preaching novel. It did not point fingers at a social cause. It didn’t drag us down into the realm of Everything I Say Is Terribly Important and Serious. You simply showed us Edie, a beautifully drawn character who created a new life for herself after her innocence was violated.

Absolutely: Edie was broken. But interlaced with that dark, pulsing threat that lived inside her, that never forgot how she was raped, was a firm and steady core, a force that pushed her forward, that accepted the bad and, with intention, strived to bring her life to a better place than before.

“Her spirits revived a little at these plans, her sense of control over her life began to return, and she stood up, banishing any further inclination to feel sorry for herself. She would continue to be mistress of her own life. She would be no victim, not of her circumstances, not of Fate, and certainly not of any man. Not ever again.”

Of course, for all her strength and confidence, she could not control her instincts or her abhorrence of sex. Someone she’d trusted had ruined it for her. She could not lead her emotions and actions to an ideal state, so she didn’t try. Edie knew who she was and she knew what she wanted. And she knew, most powerfully, what she did not want and could not have. She did not want her husband’s presence and she could not have a normal relationship with him. It wasn’t her decision; she literally just couldn’t.

The sexual assault she experienced didn’t just steal away her control during the act. It lingered long into the aftermath, stealing her choices even years later. Edie once wanted to be in love and have a happy relationship and kids and a full, thriving life. She accepted years ago that she could not have these things. This is where we begin.

One of my least-favorite tropes is marriage of convenience, where the relationship is chaste. I am uninterested in this awkward and unrealistic plot device. It usually irritates me to read about heroines who refuse to consider that sex might be a good thing, only later to embarrassingly embrace it in full after meeting their true mate who employs a wicked tongue, or whatever clunky, cliched rationale you have for a complete 180 that immediately makes the created tension a non-issue. I honestly don’t care if it’s historically accurate to have innocent misses afraid of sex due to their complete ignorance of the matter. It doesn’t entertain me in the slightest. Innocent: fine. Scorning sex entirely: tiresome.

This is the first time, after thousands of romance books read and certainly hundreds employing marriage of convenience, that I am 100% convinced of its necessity to the plot and not irritated by its employment. Lisa Kleypas’s Devil in Winter came closest before this one. I was maybe 75% convinced a marriage of convenience between Evie and Sebastian was appropriate to the plot and characters. But with every reread (according to my spreadsheet, I have read it six times), I still bitched to high heaven about it. That is the difference. Here, I did not bitch. I nodded my head and carried on reading. In fact, I was impressed with the heroine for insisting on it and taking charge of her life, and that has never happened to me before while reading a romance using the marriage of convenience trope.

Her arrangement with Stuart was a wonderful solution, or so she thought. She provided the money in the marriage and Stuart provided the means to her independence. He agreed to go back to Africa fully funded and do whatever he liked for the rest of his life. He could do anything at all, so long as it wasn’t in England with her.

But years later, after he nearly died in Africa and lost a friend, all he wanted was to be back in England. With her. She had no idea why this could be so. She never understood her husband and never fathomed his true sentiments toward her. Her concept of their marriage was simple:

“We both know you married me for the money!”

“Your money, as lovely and fortuitous as it was, my sweet, wouldn’t have persuaded me to the altar. I knew what my family’s financial situation was before I was fifteen, and if money was all I needed to tempt me to matrimony, I’d have married long before we met. No, I married you because although I’ve known plenty of women, I’ve never known one quite like you.”

Stuart, the Duke of Margrave, had a definite flaw: he had to be liked. His own family never liked or cared for him, which is probably why he thrived on the fact that everyone else did. He was deliberately charming to all he met. Women gave their hearts regularly. When he encountered Edie, who flat-out refused to like him, he took notice. After marriage, his wife stayed cold, no matter what he did. His interest in a novelty, a woman who couldn’t be charmed by him, converted over time into his own private emotional hell.

He held Edie in much greater regard than she ever did him. He genuinely liked her and enjoyed being with her. She wanted him on another continent. He wanted her to like and want him, to feel even a fraction of the craving he had for her. She didn’t. He’d finally found a woman whose heart he wanted and she declined to give it. Politely.

No matter how he changed tactics, Edie still had the upper hand. She waved him away without the slightest idea that she hurt him in doing so. He was patient. He was respectful. He was tortured. She, his own new family, also did not want him. She couldn’t even abide the thought of their living in the same country. Cohabitation was firmly and vehemently denied. She made it perfectly clear that she was happier when he was gone and she didn’t have to acknowledge his existence.

It wasn’t a healthy relationship.

He needed Edie to embrace him wholeheartedly. She was not only unable to do so, but entirely ignorant that her lack of regard for him was one of the most distressing situations he’d ever experienced. And that’s how you do it: tension created through two opposing forces, both with a powerful need that cannot be satisfied by the other. You throw them together and you give them no exits.

I actually went weeks after reading this before finishing the review. I kept hopping between B+ and A-. This is not a perfect novel. The pacing is a bit slow. The villain is predictable and tedious. I also didn’t enjoy the ten-day bet itself. I am always wary of bets used in plots when they hold such life-changing stakes. I understand it’s the catalyst for change here, but a bet that someone won’t kiss you within ten days, or you’ll agree to legal separation, and if they do kiss you, they’ll stay with you forevermore as your real wife, just smacks of silliness to me. It’s a weak aspect of the plot.

Still, weeks later, I find myself wanting to re-read it. I find myself thinking about Edie. She impressed me as a character, and she left an imprint on my mind. I think about Stuart and his strong need to be loved by someone, by anyone, and I am gone. I loved this story’s center. I will read it again and I will remember it. Thank you, Ms. Guhrke, for writing it.