When Hot Head first came out, I heard good buzz about it, read the blurb, and refused to read anymore. I didn’t even read the excerpt because the blurb sounded so ridiculous:

Since 9/11, Brooklyn firefighter Griff Muir has wrestled with impossible feelings for his best friend and partner at Ladder 181, Dante Anastagio. Unfortunately, Dante is strictly a ladies’ man, and the FDNY isn’t exactly gay-friendly. For ten years, Griff has hidden his heart in a half-life of public heroics and private anguish. 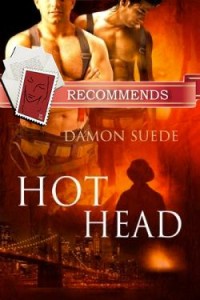 But I kept hearing about how good it was from people I trusted, whose tastes match up with mine. And then Heidi Cullinan told me to get off my ass and read it. So I did. And OMG, it was so SO good.

While reading it, I kept flashing back to Evangeline Anderson’s The Assignment, in which two ostensibly straight, but really really close, police partners take an assignment to go undercover to a gay vacation resort owned by, I think, a mob boss (drug runner?). There, in order to maintain their cover, they’re forced into doing more and more sexual acts, almost all of them in front of others. Their sexual encounters, of course, just fuel the perspective character’s unrequited love for his partner. While The Assignment was much more utterly ridiculous (and WHY was it set in the early 1980s, I ask you?), Hot Head had a similar feel to it. Griff loves Dante but has no way or hope of ever telling Dante, so he suffers in unrequited silence with a mighty case of blueballs. Dante secretly loves Griff too and figures out a way to feel out whether Griff is interested by working for the HotHead.com website. He pushes them further and further in their sexual encounters in front of other people, finally breaking down the barriers of heteronormativity keeping them apart so that they can admit their love for each other.

The thing that really worked for me about Hot Head, though, is that Griff, from whose perspective the whole story is told, embraces not only his attraction for Dante, but quickly identifies as gay. He’s not gay for Dante. He’s gay and it’s his attraction to and love for Dante that allows him finally to realize it. He even thinks at one point:

Well, maybe that was the real solution. Maybe if Griff didn’t confess his feelings for his friend to his friend. Maybe he could just float the idea that he might like dudes, yes, like-like. But what if that changed things between them? What if Dante laughed and winked and offered to get him a discount on a HotHead membership? What if Dante felt weird around him after that?

Right. The thing to do was to try and get over Dante. He needed to find another guy and get used to the gay thing and move on. Fairytales were bullshit. Happy endings were for suckers. People didn’t love each other forever.

I loved these characters. They’re so different from each other and fit together so well. I loved the writing. It’s very visual and very understated. I know from your bio that you’ve written for TV and film for years and whether knowing that affected my reading of the book, or whether I would have thought that anyway, I don’t know, but it did feel very cinemagraphic in places, very visually focused, allowing facial expressions to set a scene or answer a question, rather than having the characters actually come out and SAY what they needed to say. This cinemagraphic focus, however, was also occasionally a problem in that you used weird sounds a lot. When the characters are having sex, lines like “Ungh. Unghh. Mmmph. Fuck.” and “Ungh. Ungghh. Aww!” are just ridiculous, not sexy. Either have the characters babble in real language or describe the sounds, but this seemed silly to me.

Overall, though, I can’t WAIT for the sequel. I can’t wait to see the fallout of Griff and Dante coming out to the firehouse and to Griff’s father. I can’t wait for the story of secondary character Tommy. I loved the community Griff and Dante gathered around themselves at the end: family and friends, gay and straight. This is a deeply character-driven book with a silly premise that gets worked out brilliantly.

Grade: B+ and a Recommended Read