Hot Finish is a Save the Contemporary pick.   Go here to find out details on how to win an 8 GB iPod Touch.

I love this series and I particularly love this book.   One reason is because sarcastic, outspoken, irreverent and bossy Suzanne isn’t toned down when she gets her own book.   Previously Suzanne was the best friend of the female protagonists in the series. Best friends are allowed to be a little louder, brassier, maybe even more confidently sexy, than the heroines. I was worried that in order to make Suzanne palatable as a main protagonist that she would have to be watered down but, no, the Suzanne that you see in the previous two books is exactly who you see in Hot Finish.

“Do I seem like a woman who knows how to emotionally divorce myself from anything?   Imogen, I’m the queen of stuffing shit down so deep I need laproscopic surgery to pull it back out.” 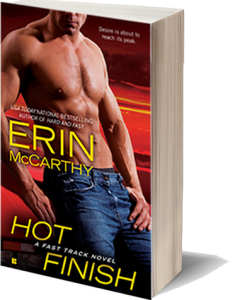 Suzanne Jefferson re-started a wedding consulting business because she is flat out broke and refuses to take money from her ex husband, Ryder Jefferson.   Ryder is a top driver for a stock car series (also known as Nascar in my mind but not in the books as that would be a trademark infringement and apparently while teaming up with vulgar but funny actors like Will Ferrell is okay but combining sex and Nascar is not, but I digress) and is serving as the best man to a wedding between fellow driver, Jonas, and a track bunny named Nikki.

Ryder doesn’t really know Jonas but has agreed to serve as best man so Suzanne can make some money. He worries about her, even though they are divorced.

Suzanne and Ryder married seven years ago and five years later, Suzanne walked out of their home and never came back.

She wanted to say something to defuse his anger, to finally, after two years, reach a real level of friendship with him, but she didn’t know how to do that.   She never had, and while she cared a hell of a lot about Ryder, the truth was, they didn’t seem to know how to be in each other’s lives.

After two years of separation and divorce, neither has really moved on with their lives and when Suzanne and Ryder find out that their divorce was never finalized, Ryder sees this as an opportunity to reclaim what they had once lost.

I loved Suzanne and what was more important so did Ryder.   Everything about Suzanne turned him on: her quick temper, her outspokenness, her adventuresome nature.   And through Ryder’s eyes, we see that everything about Suzanne is awesome to him. She can cut him to the quick and get him from zen to insane in a nansecond but the reader knows that Suzanne is the only woman the really does it for him. He thinks she is sexy in her puffy vest and in borrowed sweats, ordering cake, and basically, just by existing.

The thing I got about this book was that everyone is beautiful through the eyes of the one who loves them.   Nikki was a money hungry twig, the original Bridezilla but something about her made Jonas, her racecar driver catch, happy.

As with the previous books in this series, the dialogue is awesome.

“If you think this is awkward, you should have been in the car when Nikki was describing Jonas’s penis to us in great detail.”

Ryder felt his skin crawl.   “Damn, am I glad I missed that.”

“Yeah, well, I don’t think we heard an ounce of truth, because if you listened to that girl, Strickland is as thick as a jar of pasta sauce and as long as a garden hose, both of which I’m pretty sure are physically impossible.   If he was packing the way she claims, he couldn’t climb in the car to drive.”

It’s funny, of course, but it’s also very authentic. I particularly loved the guy parts because they sounded like, well, guys.

Evan popped his head into the open door.
“I can’t believe you losers are leaving.”
“Yeah, well, someone has to take Captain Morgan here home.”
“Let this be a cautionary tale,” Evan said.
“Against rum?   Yeah, I’ll agree with that.”
“Against women.   Nothing but trouble.”
“Thanks for that, we’ll keep in mind when we’re having sex every night and you’re not,” Elec said.   “Catch you later.”   He put his boot in his brother’s gut and shoved.

The attempts at a guy’s night out that devolves into texting each other’s girlfriends was hilarious.

While other characters from past books make appearances, the story is really about Ryder and Suzanne who’ve never learned how to communicate with each other. Ryder, the more open emotionally of the two, never really understood the depth of Suzanne’s insecurity. Suzanne always felt that Ryder would never have married her if she hadn’t gotten pregnant. Her poor trash upbringing loomed too large in her mind for her to believe that Ryder, a wealthy, good looking man truly loved her. The two push each others buttons, knowing that they shouldn’t say the thing that is actually coming out of their mouths but seemingly helpless to stop it followed by internal recriminations.

Laying in bed staring at the ceiling and feeling sorry for himself was much more his style.

Feeling like a total dumb ass, Ryder stripped down to his briefs and slid underneath his sheets, feeling so surly he consciously skipped brushing his teeth, something he never, ever did.   Bad breath would teach her.

The real problem with Suzanne and Ryder is that they weren’t very good at communicating with each other and in the course of the book, they learn (and we readers get to see) them trying to talk to each other more about what they are feeling.   Ryder is much better than Suzanne because he comes from a safer and more secure place in his life whereas Suzanne always felt like she wasn’t good enough but he does things off hand, failing to make Suzanne really understand that he cares.

Hot Finish reminds me so much of what I love about contemporary romances. It is modern, of course, but it’s romance stripped down to its essentials: people who love each other trying to figure out how to make it last.   B+

This is a mass market published by Berkley, a division of Penguin. Penguin participates in agency pricing.

→ Jane
Previous article: REVIEW: Burning Up by Singh, Knight, Kantra and Brook
Next Post: Save the Contemporary, One Book at a Time