REVIEW: His at Night by Sherry Thomas 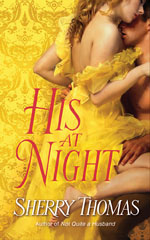 A new Sherry Thomas book is an occasion for rejoicing; I’ve given A grades to each of your three previous books. So I had high hopes for His at Night, hopes that were stoked further by the blurb on your website. A hero playing dumb (shades of  The Scarlet Pimpernel)? A desperate heroine and a marriage of convenience? Sign me up!  The book got off to a  slightly rocky start for me, though. More on that in a minute.

Lord Vere meets Elissande Edgerton when the houseparty he’s attending is overrun by a horde of rats. The estate of Elissande’s uncle is nearby the rat-plagued one, and so the hostess asks if Elissande can accommodate her guests while the rodent problem is being resolved.

Elissande isn’t quite sure what to do. Her uncle is away from home, and she’s alone with her frail, opium-addicted aunt. She knows her uncle, who is very private and secretive, would never allow such an invasion of his home, and she is afraid of his wrath. But as she  begins to realize that houseguests – titled, wealthy, important houseguests – just might be the key to escaping her uncle’s clutches (and taking her aunt with her), she warms to the idea. She sets her sights on Lord Vere right away; he’s both the most handsome of the newly arrived guests and a marquess.

Unfortunately, Elissande discovers at dinner that night that Vere is also thick as a brick. Like, really, really dumb. So she has to re-calibrate her plans somewhat.  She switches her attentions to his younger brother Freddie, an aspiring artist who feels protective of Vere, whose mental deficiencies can be traced to a riding accident that occurred when he was a teenager.

In fact, Vere’s not as dumb as he looks (or acts), and he has an ulterior motive for being in the household.  And that is at the root of one of my early issues with the book – Vere’s “secret” was revealed in the opening scene, an exposition-heavy discussion between Vere and his colleagues in a secret crime-fighting unit.

I didn’t quite understand Vere and his aristocratic colleagues – they weren’t spies in the traditional sense, dealing with international espionage. Instead, they appear to be a sort of private (or  quasi-government)  crime-fighting unit, using their society connections to uncover various domestic crimes ranging from theft to fraud and beyond. What was never explained was why and how the unit was formed. I didn’t understand (or, honestly, buy) the origins of this rather unlikely group.

Beyond that, what struck me strongly was that I would’ve vastly preferred to be introduced to Vere, the happy idiot, and only find out the  real story  later. I felt that unmasking him in the first scene wasted an opportunity for a very entertaining and dramatic reveal. Perhaps I’m reaching, but I felt a bit like the reader wasn’t being trusted to follow the characters if their true natures weren’t spelled out from the first.

Anyway, Vere is investigating Edmund Douglas, the wealthy owner of a South African diamond mine who is suspected of extorting money from diamond dealers. Elissande is Edmund Douglas’ niece. Douglas’ absence from home and the orchestrated rodent infestation give Vere the opportunity to search the house for evidence, and his facade means that it won’t be suspect if he, say, shows up in a room that he doesn’t belong in.

I had some qualms about Vere (called Penny, short for Spencer, by his family) from the beginning. On the one hand, a hero who is presumed to be a dimbulb is such a rarity in romance that I can’t think of another example of one (I think the closest I can come is the hero of a secondary romance in an old Mary Balogh regency – I’ve forgotten which one). Upon reading the first couple of chapters, I felt conflicted about  Vere  – on the one hand, he was an interesting and entertaining character, and  I could see the opportunity for a juicy story based on his masquerade; on the other hand,  the fact that he was deceiving everyone in his life – even his own beloved brother – was more than a bit unsavory to me. The deception of Freddie is – sort of – explained and repented for, but very late in the book. Too late for me not to spend a lot of time thinking about the fact that Penny had for half his life been perpetrating a horrible fraud on his brother, who was blameless and a very sympathetic character.

Elissande also indulges in morally suspect behavior, but her motivations were clearer and more coherent to me from the beginning, and thus she was more sympathetic, even when trying to trap Freddie and then Vere into marriage. She’s imbued with virtue by the suffering she undergoes at the hands of her vicious uncle, by the way that she tries to protect and save her aunt from him, and by  her obvious remorse for what she feels she has to do to  Vere in order to escape.

Vere and Elissande end up in an arranged marriage after being caught in a compromising position. Vere is angry, but must try to maintain his happy-idiot persona around his wife. Elissande is desperate; regretful that she had to use Vere (and that she’s married to  an irritating moron), but quite sure that she did what she had to do. Fairly quickly, Vere finds his mask slipping around Elissande, and she begins to wonder why he is pretending to be something that she strongly suspects he’s not.

This provides some interesting parallels, in that the three main characters – Vere, Elissande and Edmund – each have facades that start to crack in the course of the story. Vere’s facade is of an idiot, of course. Elissande’s facade is of a serene and loving niece (she smiles a lot) and Edmund’s of a concerned husband and uncle. Elissande and her uncle’s interactions are chilling for their menacing undercurrents, all the more because the nature of his monstrousness is left fairly vague. I really  did like that aspect of the story.

The last third of the book ramps up the action and throws in some shocking revelations; I’m not sure that I found these revelations entirely necessary or that they advanced the story much. I did like the fact that Elissande and Vere once again paralleled each other in having to accept some hard truths about their pasts. Both are genuinely tortured characters; I am a sucker for a tortured hero or heroine, and if they are both tortured, all the better (especially since it means that one is not solely responsible for “saving” the other, a trope I dislike).

There’s a lot to like in His at Night – appealing characters (my issues with Vere’s deceptions notwithstanding, I did like him), a storyline that moved briskly, and, as always, your delightful prose. What I did not like – or perhaps, it’s more accurate to say, what I found a little less sophisticated and polished than in your previous books – was a certain sensibility: call it a lack of subtlety. There were a number of instances where I felt the characters’ emotions and motivations were spelled out unnecessarily and it struck a bit  of a clunky note.  One instance occurs in a flashback, when Vere happens to overhear a villain expound on a murder he had committed. The villain then goes on to threaten his listener, a priest, that he must grant him absolution for his crime or the villain will reveal the priest’s homosexuality. There’s a lot wrong with this: the too-convenient expositiony-ness, the fact that the villain really doesn’t seem to get how religious absolution works, the overlooked detail that the villain, on his deathbed, might not have time or opportunity to spread gossip about the sexual orientation of the priest. In another instance, the hero discovers a notebook in which another villain has written a confession of murder in the margins. It reminded me of those James Bond films where the villain, instead of killing Bond when he has the chance, launches into a detailed explanation of his crimes for the enlightenment of the audience. But  I think I may have noticed these flaws more than I would’ve from a different author, and ultimately they did not greatly impact my enjoyment of the book.

Ultimately, I did enjoy His at Night very much. My grade for it is B+.

This is a mass market from Random House.