REVIEW: Here Without You by Tammara Webber

If I did GIF reviews, this would be the perfect book for it because I’m not sure I can fully express my journey with this book using mere words. My first reaction at hearing about this book was trepidation. A story about Brooke and Reid and Dori? Did you hear my moans of despair five hundred miles away?  And then the cover came out! I saw one goodreads review fret “Did someone die?”  And you. You were frustratingly close mouthed about anything.  “Trust me” was one Tweet I received in response to a worried reader moment. 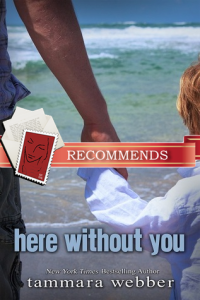 So of course, I had to buy the book the minute the pre order link came up and I had to read it the moment it was downloaded onto my reading device.

The saying that you only have one chance to make a first impression comes from the unfortunate fact that our opinion of people and events and objects is often formed by the first few minutes if an encounter. This is true with books and characters in books.

When we first meet Brooke Cameron in the Between the Lines series, she is a selfish girl who does not think for one minute of the damage she is inflicting on those around her in the pursuit of her own happiness and success. In other words, first impressions of Brooke are poor.  Very poor.

And it is hard change people’s minds, particularly 180 degrees from a previously held position. You may be able to convert a Methodist to Lutheran but transforming an athiest into a Christian is harder than threading the proverbial needle.  So it is a testament to the writing that I went from loathing Brooke to actively cheering for her.  What kind of writing alchemy is this?

This is Brooke, Reid and Dori’s story because their lives are all complicated by Brooke and Reid’s shared past. About five years ago, actors Brooke and Reid had a very serious relationship but at fifteen and caught up in the whirlwind of fame and pressures of clawing your way upward, they were too immature for their relationship to survive their raging insecurities. Reid treated Brooke poorly believing that she had cheated on him and Brooke responded by inflicting as much pain as possible in return.  When Brooke becomes pregnant, Reid agrees that the baby should be given up for adoption and he puts the existence of his child out of his mind.

Fast forward five years and Reid is trying to convince his girlfriend, Dori, that taking a chance on him won’t lead to bone deep hurt.  Dori isn’t so sure.  Reid’s reputation as a player in Hollywood is cemented already at twenty.  Plus, she’s completely disinterested in his world of fame and glamour.  As a reader, it is convincingly delivered that Dori would prefer to not have a famous boyfriend.  Her dreams likely included falling for a guy who was devoted to missionary work and together they would travel the world to deliver aid and spread love.

Reid not only knows this, he recognizes that Dori is the kind of girl he only gets a once in a lifetime shot at and he does not want to screw it up.  Dori is such a sweetheart and she’s opening herself up beyond her ordinary cautious limits to let Reid into her life. She is the catch for Reid rather than the other way around. He’s never going to find someone like her again because girls like Dori just don’t run in his circle whereas Dori is so amazing and so loveable that she’s bound to find someone awesome if Reid fails to live up to the man he recognizes he can be when he is with her.

My biggest concern was Reid cheating on Dori because given his environment, I wouldn’t be able to believe he could be faithful to her again.  And if he cheated with Brooke, a woman he’d had feelings for in the past, then it would be even worse.

But that’s not the story that is being told here, thank God!
Dori’s discomfort with the trapping of Reid’s life results in her withdrawing. Her parents aren’t welcoming of Reid and she feels dowdy and foolish around Reid’s friends.  At her college, students who’ve seen them together delight in sharing photos that show Reid with other females.

Reid feels Dori slipping away and he’s not sure what he can do about it. He really does love acting and he doesn’t mind the fame and he enjoys the money but none of that is as important as Dori. He’s got to figure out how to convince Dori that he is worth her effort and in doing so ends up making a mistake that pushes her farther away.

It’s not cheating, I promise.

When Brooke is faced with the usual circumstances of her child being put into foster care after the death of his adopted father, Brooke is compelled to reassert her parentage.  Brooke’s past is littered with uncaring parents and step parents and she doesn’t want this experience for her son. Motherhood changes Brooke. She is out for someone other than herself and she is fierce in her determination to provide for her son, regardless of Reid and anyone else who’ll stand in her way.  She brought the same passion to getting her son back that she approached everything in her life in the past and I suddenly got her and admired her.

Initially Reid is disinterested. A child with Brooke doesn’t fit into his future with Dori.  I liked Reid’s casual dismissal of this child he has never seen or held.  The child wasn’t real to Reid and until the child became real, Reid wasn’t affected emotionally by him.  That changes slowly and believably over the course of the book.

Like I said, this is a story of Brooke, Reid, and Dori and I don’t believe it could have been told any other way.

There were a few tiny things that kept this from being a perfect read for me. A few scenes were told from the point of view of the child and I felt those were unnecessary. I understand why they were included, but I wasn’t invested in the child and so they didn’t move me (or it could be because I have no heart, but either way, they felt extraneous to me).  I would have liked a closing scene on campus between Reid and Dori, showing me exactly how they were navigating that particular part of their lives.

One of my complaints is petty. I’m not ready to stop reading about these characters. I want to see more of Reid and Dori just being happy. I want to see Brooke find a man who will love and adore her for the woman she is becoming. These people have become characters I care about and I want to continually revisit them.  To readers who had the same anxiety I did before the release, fear not. Webber delivers. B+