On the frontier of a new life…

Tired and hungry after two days of traveling, Susanna Hopkins is just about at the end of her tether when her train finally arrives in Cheyenne. She’s bound for a new life in a Western garrison town. Then she discovers she doesn’t even have enough money to pay for the stagecoach! Luckily for her, the compassionate Major Joseph Randolph is heading in the same direction.

As a military surgeon, Joe is used to keeping his professional distance. But, despite Susanna’s understated beauty, he’s drawn to this woman who carries loss and pain equal to his own and has a heart that is just as hesitant and wary….

When I saw this book listed at eHarlequin, I didn’t even bother to read the blurb. It’s a western – which I know you enjoy writing the most – and it’s by Carla Kelly = sold. Is it probably going to be a similar “feel” to your other books? My gut instinct told me it would and my gut didn’t lie to me but there are times in my life when I don’t mind being run through a wringer enough to emotionally wear me out and times when I don’t want to be wrung out like a wet dishrag when a book is over. Your books always work for me in those second instances and “Her Hesitant Heart” is no exception. 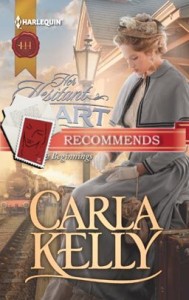 The Fort Laramie details are precise, picturesque and pertinent to the story. They add so much color and feel for the place and the people having to live, work and survive there. This is an interesting period in time for changing medical practices and discoveries and I’m glad to read that Joe is keeping up with some of these new fangled ideas without making him appear to be a medical man too far ahead of his times. The descriptions of the injuries and illnesses he faces are just enough to sketch a good idea of frontier medicine without reaching the “yetch!” stage. I was struck by the “death walk” he has to take to inform a new widow of her status and how little the terror and dread these women show as they wait to see which of them will start mourning seems to have changed.

Susanna and Joseph are – as with so many of your main characters – pure gold both to each other and to basically everyone else. Their character arcs are no so much about them improving and getting better, as they’re already so damn good to begin with. Instead the character journeys they take are in coming to terms with their pasts, moving forward and in being there for each other.

Susanna will be familiar to anyone who has read your books before. She’s sweet, down trodden, almost but not quite to her breaking point due to the nastiness of a relative, and misunderstood by nearly everyone except the hero. Joe is another of your standard issue heroes who has his own haunting past issues, refuses to buckle under to the smirky condescension ladled on Suzie – as he comes to call her – by the holier-than-thou set who are determined to put her in her place, who quietly rouses the (literal) troops in her defense and ends up landing himself a heroine who will turn his tired, gray existence into rainbows. A shared sense of mischievous humor comes in handy too.

Despite the similarity Suzie and Joe have to many of your previous couples, they still work for me because I can clearly understand what they see in each other and what draws them together. There’s no “oh, he’s so hot that I’ll over look some assholic behavior just to fondle his dangly bits” or “she’s such a babe that I’ll ignore her idiocy because I get such a hard-on when I’m near her” that leads to “I lust you, I hate you, wait no, I love you with only 2 pages left in the book.” Rather I get to watch as Suzie and Joe slowly begin to sound out each other and then their relationship. Some trials and tribulations reveal the core values and decency both Suzie and Joe possess, showing them they have enough similarities on which to build a life. Soon they are fighting each others’ battles and delighting the other with the little kindnesses that go such a long way along life’s path.

Other characters do grow and increase in understanding and forgiveness – mainly in terms of how they relate to Suzie. At first the “Civil War widow” white lie Emily tells may seem trivial but Joe calls it correctly when he says that when the truth comes out, the Army men won’t easily forgive the untruth of her losing a husband in the war. Society and social norms were such that a divorce was shocking and scandalous and grounds to question a person’s morality and fitness to teach children. Sexist? Yes. The way it was? Unfortunately so. Joe also doesn’t lie when he tells Suzie that as a Southerner siding with the North during the war, he’s lived as an suspected outsider so if there is anyone with the knowledge and compassion to get Suzie through the ordeal of Fort ostracism, it’s Joe.

The book goes a bit beyond the HEA for Joe and Suzie and as the plot of the novel has been laid out, it makes sense and gives closure to Suzie’s past. It’s not just the people of the Fort discovering the truth of the horror that lead her to flee her marriage and reversing her fall from grace. It’s Suzie being reunited with the one person from her past she pines for. I found it fairly obvious how this would be engineered yet the reality was still daunting as Suzie and Joe discover when it’s over. The book ends with a few loose threads leaving the reader to mentally tie them up – or not – in various ways. I still found it a satisfying way to wrap things up.

I’ve read variations on these characters and this theme countless times from you before but when I want something soothing, when I want a solid couple who won’t irritate me by being douchbags just because the plot requires it, when I want sweetness and light and nothing that’s going to push my buttons or needlessly upset me – you’re the one I turn to. B+