This book was not what I expected when I picked it up. In fact, I’d even venture so far as to offer a caption. 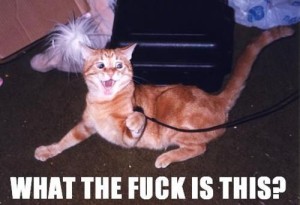 Heat is probably the best independently published book I have read, and one of the best books I have read in a long while. It is also one of the most graphic, and most disturbing books I have read in a long while. When I finished this book, I told a friend about it and she said it sounded awful. On paper, it does sound awful, but it was a truly compelling read and I could not put it down. I mainlined this book as if I were a junkie and this was my fix. I debated about reviewing it, since it is not the standard Dear Author sort of book. But the bottom line is that I want to talk about this book with other people, so here’s the review.

Warning – if you are easily triggered, this is most definitely not the book for you. Move along. 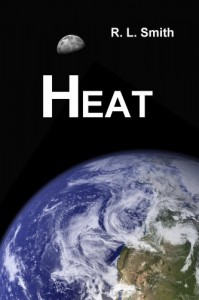 I stumbled upon this book on Amazon, but I’m not sure how. Perhaps someone mentioned it on a villainous hero thread. Someone said it was the most unique and different romance they had read in a very long time, and that was all it took for me to purchase despite the hefty cover price. This review will probably end up rather long, so fair warning.

Heat does not fall into my regular reading category. It’s about two sets of alien men. One is an escaped drug dealer and criminal who is hiding out on earth. The other is the stiff and proper interplanetary cop who is chasing him. They are both the heroes, and over the course of this very long book, they both fall in love with their respective females. This is definitely a romance. A bizarre one, but ultimately with a happy ending for both parties.

The book starts out with Kanetus, aka Kane. Kane is a Jotan interplanetary pirate who has been sentenced to life in prison for any number of crimes. He escapes and heads to earth. Earth is full of humans, and the Jotan treat them like pets, sex toys, and slaves. Sometimes all of the above. Another interesting thing about humans is that they produce a chemical called dopamine that can be harvested from their brains. From this chemical, an illegal drug called Vahst can be made. Vahst is in high demand and Kane is broke, so he has a plan. Go to earth, harvest humans to make Vahst, and return to his life of space piracy a rich man. When Kane gets to earth, his plans are quickly turned upside down. It is summer on earth, and heat makes Jotans go into heat – they must have sex on a regular basis or else they are in intense pain and become ill. Kane doesn’t have time for this, so he decides he will steal himself a human. After grabbing and raping the first woman he runs across, he is perplexed when she runs away and kills herself. So he gets another human, and this time reminds himself to be more careful.

The new human female is named Raven, and she’s an eighteen year old street prostitute who loves drugs and living wild. She’s terrified of Kane and how brutally he treats her, as any woman in her right mind would be. What Raven wants isn’t a factor in the first half of the story. She is Kane’s to use as he wishes, and gradually she begins to help him with his harvesting of other humans for the Vahst, which is just as graphic and awful as it sounds.

Tagen is the interplanetary cop who has come to earth to find Kane and bring him back to justice. He’s afflicted by the same situation as Kane – the heat of summer makes him need sex intensely, but he refuses to give in to it. Tagen accidentally kills a human with his blaster and he is horrified that he is so careless with human life. Suffering from the elements, Tagen collapses on the doorstep of Daria, a human woman who is a recluse. Daria takes him in despite his fearsome appearance and his strangeness, and she helps him recover and later assists him in his hunt for Kane.

The story is a very interesting dichotomy about two men who could not be more different, but are both influenced by their late fathers, and you layer this in beautifully. Kane remembers his dead father with fondness, for all that his father was a murderer and pirate who taught Kane to be just like him. Tagen was adopted by a man that served as his father, but he never felt affection or love, merely duty, and this influences the man he has become. It’s a very interesting nuance to a story that on the surface sounds coarse, violent, and a little weird.

Though we are given dueling storylines, the ‘romance’ between Kane and Raven is the more compelling of the two storylines. It’s interesting to note that Kane is a villain, but over the course of the story, he is not reformed from his wicked ways in the slightest. He remains a rebellious killer on the first page and the last. Nor does Raven, his love interest, change from her hedonist ways. Rather, the characters change by being together, and change in how they perceive each other. Raven begins to assist Kane with his Vahst collecting, and Kane begins to appreciate how smart and clever and cautious she is. Raven, for her part, begins to understand Kane’s cues and how he functions, and learns how to show him that she is a worthwhile partner. While their story starts out with a very Stockholm-Syndrome vibe to it, it progresses to something else, and by the end of the book, Raven is very much an equal partner to Kane, and the last scene of the book had me thrilled to my bones at how far Raven had come.

Tagen and Daria have a much sweeter, more traditional romance. Tagen is worried about hurting Daria, who has clearly been damaged in the past. In addition, Jotan women are the ones that are aggressors in the relationship, and since Daria does not make a move on him, he simply waits for her to indicate that she wants him. This takes a very, very long time since Daria has been hurt in the past. Tagen is obsessed with his police-work, and he appreciates Daria’s clever mind as she begins to help him track down Kane. In turn, Daria is attracted to Tagen, but she is afraid of letting someone into her safe, protected life and being hurt all over again. Their relationship is much slower to develop, but is a nice counterpoint to the violence of Kane and Raven’s relationship, and when they finally get together, the reader knows it is because they have come to a genuine understanding and mutual desire.

Despite the violent storyline, there are some genuinely touching moments between each couple, and some very funny ones. The conclusions that Tagen comes to as he tries to figure out earth culture by watching TV are quite funny, as well as the scene in the sex shop.

I would be remiss without pointing out that this book is very long.  The page count is not listed on the Amazon page, but clicking over to the paper copy shows that it’s over 600 pages long, which sounds about right. Yet the book does not feel dragged out or change plots halfway through (unlike your other book, Olivia, which I bailed out on at 40%) and the story never loses its momentum. I was actually sad to see the book end and immediately looked for other reads similar to Heat, because I wanted to return to that enjoyable intensity your writing brings.

Overall, Heat was an uncomfortable read at times but a riveting one the entire story. I am struggling with the grade to give this book. The writing and intensity that I felt while reading it mark this into A+ territory, and I am stingy with my grades. I haven’t felt quite so caught up in a book in a very long time. Yet if I were taking off marks for awful things depicted in the story, I’d have to mark it right back down to an F grade, because there are a lot of reprehensible things done and committed by one of the heroes. Kane is not nice. He does not become nice. He is not reformed into a kinder, gentler Kane by the end of the story. If you are interested in villain heroes, this is definitely a book to get. If not, you should pass this one on by because you will regret every dollar you spend.

I do feel as if this sort of book was the reason I read indie books. I’m constantly hoping for that one read that will probably never be published by a mainstream publisher, yet is intense and consuming and surpasses all my skeptical misgivings. The happy ending for both couples cinched this for me, since I was worried that it could not possibly end well. And yet, you pulled it off.  I have to give this a very enthusiastic B+/A- and hope that others pick it up so they can tell me if I have lost my mind with my affection for this book.

PS – Your website is awful and your book covers almost as bad.