REVIEW: Hearts and Flowers: A Tale of Hay Fever and Bad Decor by Angel Martinez 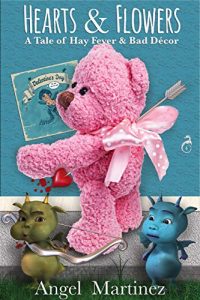 Office parties can be horrible, but they’re not supposed to be life threatening.

Michael Sarver hates Valentine’s Day. Between the flowers, the tacky decorations and his sleazy boss, he’s certain he’s about to experience the worst costumed office party in history.

But Cupid’s minions and a certain Hawaiian god have other ideas. Let the mayhem begin.

I wasn’t quite sure what to expect from this book but as it’s from you, I knew it would at least be funny and slightly offbeat.

The ballroom looked like a Hallmark store had wandered by and thrown up its innards in a fit of disgust over the excesses of the season.

I’m sure I’m not the only one who agrees with the fact that Valentine’s Day decorations can be cloying and Michael certainly agrees. Why is he at this office party? Oh, right his boss – at whose insistence Michael manages Dave’s social calendar and keeps up with his stable of boy toys – ordered him to. Things look up when Michael runs into a fellow buffet predator who also has the last bowl of beef panang in sight. Shane Pakaua’s costume is even more inventive than Michael’s and it includes a Hawaiian god’s war club which is lucky because two love imps with terrible aim are about to set off party mayhem.

“Well, we can’t have poets being eaten by rogue kitsch on Valentine’s Day. That’s just not right.”

In periculo veritas so each gets to see how the other reacts under pressure. No possessed kitsch is going to get the better of them! As the battle against the force of evil, they actually have (believable) time to talk (during which, among other things, they discuss the possibility that Bert and Ernie are a couple) and start to get to know each other. The short story ends with a HFN and a smile on my face. B+