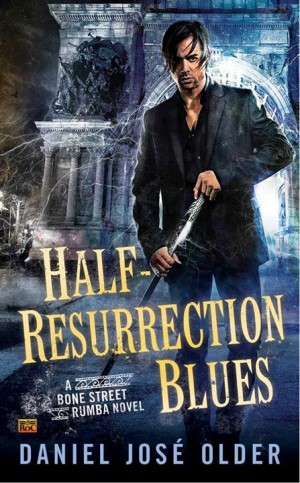 I have an uneasy relationship with urban fantasy. During the subgenre boom some years back, I dove headfirst and devoured everything I could get my hands on. It seemed like I couldn’t get enough of it. But like all things, that phase came to an end and I emerged, tired and weary of all things urban fantasy. These days, I don’t read much in the genre except for a couple favorites that stuck with me from back then.

But then Half-Resurrection Blues popped onto my radar. I’d already heard of your name through your various posts about diversity and race in publishing. That’s a topic near and dear to my heart, so I made sure to get my hands on your debut novel as soon as I could.

Half-Resurrection Blues focuses on Carlos Delacruz, a guy who’s not exactly alive but not exactly dead either. He’s something in between. (Conveniently enough, he’s called an inbetweener. Simple, right?) He doesn’t really remember how he died and the life he lived prior to that? A mystery.

These days, he works as an agent for the New York Council of the Dead. Carlos has always thought he was one of a kind. But when he kills another inbetweener during an assignment, he’s forced to face the reality that he is definitely not. Not only is there the matter of the dead inbetweener’s beautiful sister, there’s the inbetweener sorcerer the guy may have been working for.

Of course, Carlos wants to find out what inbetweeners are. The circumstances surrounding his death and the mystery of his previous life are big question marks. That’s already enough temptation. But on top of that, the sorcerer wants to tear apart the boundary separating the living and the dead. And it’s up to Carlos to stop him.

What a refreshing read. It’s an urban fantasy set in New York City that actually reads and feels like New York City. The urban environment comes alive in Half-Resurrection Blues, and it made me smile. I felt the alleys, streets, and people-crowded sidewalks. Not to mention the fact that there were so many POC! A New York City that wasn’t unbearably white. This is a major complaint I’ve had about many urban fantasies — the lack of racial and ethnic minorities. This novel addressed that lack and more. There weren’t just POC in the book; their cultural backgrounds and heritages were an integral part of their characters. Loved that.

I also really enjoyed the narrative voice. Urban fantasy has this reputation of being filled with snarky, in-your-face protagonists with attitude problems. And while Carlos has his moments, I found the voice to be more reminiscent of noir. Carlos is a loner but he’s not a guy with a chip on his shoulder. He’s just lonely — someone who, until recently, thought he was only one of his kind. Because of that, there’s a quality in his narration that many minorities, be they POC, LGBTQ, or neuroatypical, will identify with.

My only disatisfaction stems from the female characters. I get that this is Carlos’s story and, of course, the focus is on him. And it’s not even that there weren’t any female characters of note. Mama Esther, Kia, and Sasha are all forces to be reckoned with. I have no doubt they were doing their own thing when they weren’t on page. But see, I knew that intellectually; I didn’t feel it as a reader. Sasha, especially, was such a cool character and I don’t want to reduce her to “just” being Carlos’s love interest because intellectually, I know that’s not true, but in many ways, that was her only role in the novel. I know this might seem like nitpicking in what is otherwise a great novel, but that’s why it stands out to me.

While I won’t say Half-Resurrection Blues is groundbreakingly original (it’s not), it is refreshing. The urban setting feels realistic and true-to-life, and the cast of characters is anything but whitewashed. I will also say that it’s really nice to see POC depicted on the cover, with a head and face clearly seen. Back when I started reviewing for DA, that definitely wouldn’t have been the case. Progress. B+

→ Jia
Previous article: REVIEW: Claiming the Rebel’s Heart (aka Her Rebel Heart) by Alison Stuart
Next Post: REVIEW: Written in My Own Heart’s Blood by Diana Gabaldon