REVIEW: Good for You by Tammara Webber

The first time I came across your books was on Amazon when it recommended that I buy Between the Lines, the first in your Hollywood trilogy, after I had purchased a different YA contemporary. I resisted because there are rarely less interesting characters to me that famous people. Fiction often relies on one’s ability to separate fact from fantasy and the real world often intrudes too heavily when there are real individuals that can intrude into the pages of the book. It’s one reason I dislike when authors shortcut and try to use actors or actresses to describe the looks of a character. Whatever prejudice or bias a reader may have toward that famous person will often overlay any character description the author may write. And, let’s face it, famous people as much as they are interesting to individuals are often viewed with some measure of disdain and distrust. 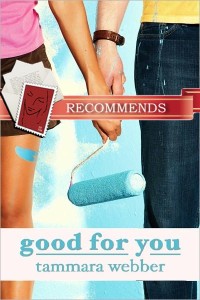 What works, however, is that you inject a portion of that wariness into the female protagonist, allowing her to express the ordinary reader’s feelings toward the culture of fame which simultaneously serves to justify the reader’s feelings and empathize with the female protagonist. The female lead is Dori Cantrell, an eighteen year old whose drug of choice is giving of herself. She helps teach young children at Vacation Bible School. She has plans to do a mission trip to Ecuador, her third in as many years. In the fall, Dori will attend UC Berkley and get a social worker degree. Currently, Dori is working with Habitat for Humanity to build a home for a family whose residence was destroyed when a young Hollywood actor drove his car into the front porch.

Reid Alexander became famous too young, had too much money, and too much unfettered access to hedonic pleasures. He isn’t interested in limits and has few people around him willing to impose any on him. His mother is a vacant alcoholic. His father is a successful lawyer whose only real contact with his son is to report on how he is managing Reid’s money. His best friend, John, is a trust fund kid whom Reid suspects loves him and loathes him in equal measures.

Friends ask why I don’t just ditch my dad. I’m nineteen, an adult in every legal sense of the word (except the ability to drink legally, which is annoying as shit). I’m a legitimate Hollywood star, with a manager, an agent, a PR guy, or woman, as the case may be—Dad may have fired Larry when he didn’t move fast enough to save those endorsements last week. That’s the thing. My father takes care of everything. He’s the CEO of my life, and I’m the product. He manages my career, my money, my legal issues… I don’t have to do jack shit but show up for auditions, movie tapings, premieres and occasional commercial endorsements. I can’t stand him any more than he can stand me, but I know he won’t screw me over.

In the end, Reid comes to the realization that in his circle of acquaintances which posture themselves as his friends, a father that won’t screw you over is something of a marvel. It’s both sad and a relief when Reid accepts this form of love from his father.

After his latest reckless stint, Reid’s agent gets Reid bargained down from incarceration to three weeks of heavy duty manual labor at Habitat for Humanity. There he is paired with the only other young working person, Dori. Dori knows who he is. Everyone does but she immediately views him as a dilettante.

I live in Los Angeles, after all, and while I might not run in his circle, or even within the same galaxy as his circle, I know his type: careless, spoiled and heedless of anyone’s needs outside his own. Even with that angel’s face, he cannot be trusted.

For all of Reid’s bad behavior, he is remarkably charming. Part of this comes from the fact that Reid knows exactly who he is and looks upon his own behavior and that of those around him as feckless. He doesn’t engage in any self loathing in the beginning of the book. He is too arrogant and not reflective enough. Reid likes who he is. After all, other than his father, he has no one who ever tells him that he isn’t the greatest piece of ass walking the earth. It is through his interaction with Dori that Reid begins to change, begins to look outside of himself and by doing so comes to recognize that perhaps his current assemblage is in some way defective, or at least, like the house they are fixing up, in need of improvement.

As charismatic as Reid is, Dori made the book for me. An aspiring do gooder social worker who doesn’t swear and whose greatest joy is helping others has every danger of coming off as a preachy bore. Yet she is not. Her desire not to swear, drink or smoke isn’t pushed onto anyone else. It’s truly an integral part of her makeup. Her past, even at a young age, is not without its blemishes. I wasn’t clear whether Dori’s desire to help others came out of some sense of guilt for her past but what makes Reid such a perfect match for Dori is that she allows herself to see human frailty with more compassion, both in herself and in others.

Dori is described as plain. She has long, dark hair and wears baggy clothes. She never becomes more beautiful although when tricked out, she can look good. It’s that her looks become unimportant in the story. There is no real transformative scene that makes Reid look at Dori differently. Reid looks at Dori differently because her internal makeup affects him strongly. Reid’s physical perfectness is actually the flaw in the story, juxtaposed against Dori’s plainness. Dori has a beautiful voice but there is no effort to make her into a rock star at the end of the book.  Her aspirations of being a social worker are deemed to be just as valid as Reid’s pursuit of fame and fortune.

There are so many other well integrated details.  Dori flushes a lot and Reid can tell her moods by the color of her ears. At one point, during an emotional scene, Reid pulls Dori’s hair back so he can see the tips of her ears, her emotional barometer.  Dori’s sister, a resident  in Chicago, plays an important role by falling in love and telling Dori how marvelous it was to have waited for this man, another doctor.  The parents are satellites to the story but in their own way appropriately influential in Reid and Dori’s lives, whether it be for good or bad. John, Reid’s best friend, is authentically portrayed as someone who longs to be Reid and might knife him in the back at the next turn.

The storyline spans the summer and fall and there are surprises in the story that I won’t ruin in the review.  I kept thinking at various times that these are story lines I’m not reading in adult romances and regretting it.  No one in the story is a caricature and it would have been so easy to use these two individuals and provide a superficial story, relying on the reader’s own experiences to fill in the details but Reid and Dori and the whole supportive cast are full bodied. I know some adults resist reading YA and I am not a huge YA fan myself but this is as good of a romance as you’ll find these days. B+

Note:  The first two books in this trilogy tell the story from four points of view: Graham, a young handsome but role playing actor; Brooke, the young famous starlet; Emma, the young made famous by a big role in a YA remaking of Pride and Prejudice; and Reid, the young very famous actor. These two stories are more soap opera than romance although book two concludes with Graham and Emma cementing the romance started in book 1, Between the Lines. The setting of book 1 is the movie set; book 2 is the publicity tour.