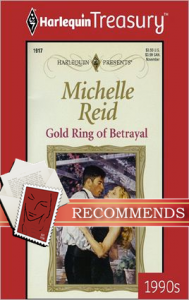 Gold Ring of Betrayal is an quintessential HP for that reason.  It’s full of non stop emotional agnst but like many Reid books, the conventions are taken and turned slightly.  The heroine was a doormat but turned into a fighter.  The hero seems like an overbearing asshole, but he’s driven by his own emotional hangups, ones that he must overcome to achieve the HEA.

Sara married Nicolas Santino after a short but persistent courtship. She was young, gauche, and entirely unprepared for the wealthy and sophisticated company that Nicolas kept.  Swept away from London and installed in his Sicilian estate, Sara became essentially a prisoner and a very unhappy one at that.  Nicolas deposited her with his father and amongst his friends and almost reveled in her uncomfortable state. He married her because of her innocence and her shyness.

Nicolas made a crucial mistake.  He believed that his father would come to love Sara as he, Nicolas, loved Sara.  But his father did not.  His father hated that Nicolas married a pale English rose instead of a Sicilian girl.  His father plotted to get rid of Sara and he was successful.  In a nefarious scheme executed by Nicolas’ father, Nicolas came to believe that Sara had taken another man to her bed and he cast her out.   When Sara informed Nicolas that she was pregnant, he refused any contact and instead sent his emissary to tell her that she and her child would have his name, his financial support but that the child was not his.

For three years, no contact has passed between Nicolas and Sara.  He travels around the world on business and Sara is raising her child but in the meantime, Sara has changed. The crucible of her marriage and the betrayal of Nicolas forged her into a different person. When they meet again, she lashes out at Nicolas (you give no quarter, Nicolas says to her at one time), whereas before she would have hid. She brings forth all the ways in which he failed her in their marriage, marrying her and forgetting her; making her feel as if she was nothing but a vessel for his passion.

This story begins with high emotional agnst and you keep pushing it throughout the entire story, raising the stakes even higher the deeper I went into the story.  But what makes this such a memorable story, one that I have returned to several times since I bought it used, is how the story plays out in its resolution.  Nicolas has stayed away from Sara because he must know his own frailty in regards to her.  When Sara accuses Nicolas’s father of being involved with some dastardly deed toward her and her daughter, Nicolas admits as much:

“How, with your logic, does that make me jump to my father”s bidding?”

Her eyes, bruised and darkened by anxiety, suddenly flickered into a clear and cynical brilliance. “It has brought you here, hasn’t it?” she pointed out. “Made you face a mistake you have been refusing to face for three whole years.”

To her surprise, he laughed”not nicely but scathingly. “If those are my father”s tactics then he has made a grave error of judgement. What’s mine I keep.” His eyes narrowed coldly on her. “And though I will never wish to lay a finger on you myself again in this lifetime I am equally determined that no other man will have the privilege.”

This is a marriage in trouble story doubled down with deception and betrayal and both parties had to come to admit their flaws–Sara in her inability to stand up for herself and Nicolas for never supporting her. Nicolas betrayed their marriage in a million tiny ways; their breakup was inevitable so long as Sara couldn’t stand up to him. I appreciated that Nicolas recognized that the feelings he had for Sara, the innocent, weren’t even close to what developed for Sara, the fighter.

What others may not connect with is Sara’s huge capacity for forgiveness and understanding. Even though Nicolas has treated her abominably, she understands, and conveys to the reader, the horror and emasculation Nicolas feels believing that Sara took another man to her bed. The narrative did a great job of showing the reader why Nicolas believed that Sara had betrayed him physically even when she protested her innocence.

‘Who is this Englishman I hear you’ve befriended?’ he asked her one evening as they were getting ready for bed.

‘That is not how I hear it,’ he said coolly. ‘I would prefer it if my wife did not have her name connected with another man. Break the friendship, Sara,’ he warned. ‘Or watch me break it for you.’

For some time her desire to fight back, if only with Nicolas, had been growing stronger the more pressure Alfredo applied to her nerves. And this once she retaliated, hard and tight. ‘If you can rarely be bothered to be here with me yourself, then I don’t see what right you have to tell me who I can and cannot spend my time with.’

‘I have the right of a husband,’ he arrogantly replied.

‘Is that what you call yourself? I call you the man who occasionally visits my bed! How long have you been away this time, Nicolas?’ she demanded as his eyes flashed a warning. ‘Two, nearly three weeks? What am I supposed to do with myself when you’re not here—hide away in purdah?’ In her mind this was not an argument about Jason Castell, but about their lifestyle in general. ‘If you want to know what I’m doing every single minute of the day then stay around and find out!’

‘I have a business to run!’ he threw back harshly. ‘The same business which pays for all your fine clothes and the luxury surroundings for you to wear them in!’

And she was, seeing him in all his golden-skinned, sensually sinewed, naked glory.

But for the first time ever she turned away from the invitation his husky words had offered. ‘We’ve been married for almost a year,’ she said. ‘And I can count on the fingers of one hand how many weeks we’ve actually spent together. This isn’t even my home, it’s your father’s!’ she sighed. ‘And on the rare occasions you do find time to come here your father takes priority.’

‘I refuse to pander to your unnatural jealousy of my relationship with my father,’ he clipped.

‘And I hate living here,’ she told him bluntly. ‘And if you can’t be here more than you are then I want to go home, to London. I want to get a job and work to fill my days. I want a life, Nicolas,’ she appealed to his steadily closing face, ‘that doesn’t revolve around couture shops and beauty parlours and feeling the outsider with all these tight-knit, clannish Sicilians!’

‘A life with an Englishman, perhaps.’

She sighed again, irritably this time. ‘This has nothing to do with Jason.’

‘No!’ she denied. ‘It is to do with you and me and a marriage that isn’t a marriage because you aren’t here enough! It’s to do with me being unhappy here!’ Tears, honest tears, filled her eyes at that point; she could see him blur out of focus as she appealed to him to understand. ‘I can’t go on like this—can’t you see? They—your father, your friends—overwhelm me! I’m frightened when you’re not here!’

An appeal from the heart. It should have cut into him, reminded him of the soft, gentle creature he had originally fallen in love with. The one who had been so timid that she used to cling to him when he’d introduced her to someone he knew, or had reached for his hand if they’d crossed the road, or could be tongue-tied by a painful shyness when teased.

But he was Sicilian. And a Sicilian man was by nature territorial and possessive. And if Sara dismissed Jason Castell from her mind as unimportant Nicolas didn’t. Because she hadn’t voiced all of these complaints before the Englishman’s name had begun cropping up in conversations around the island. She hadn’t dared to argue with him like this before the man had come on the scene.

And she had never turned away from the blatant invitation of his body before the Englishman’s appearance.

All of this was written to show us why Sara understood Nicolas’ pain and why she was so mixed up with love and hate for him and how she could ultimately forgive him. Nicolas, himself, makes a big gesture toward the end because (and this is a spoiler) [spoiler]he asks for a reconciliation even believing that she cheated on him which, for him, was a huge huge thing.[/spoiler]  I love how reading certain passages make your heart clutch in sympathy.

The story ends with sunshine and rainbows for nearly everyone but I felt it fit the story. Where the story could have been stronger was that Nicolas was quite the martyr at the end of the book. While I loved some of the dialogue that came from his martyr-ish state, I (and apparently Sara) were a bit weary of it. For prose purists, there are definitely awkward turns of phrase and even if you are lost in the story, the rough prose might pull you out. Having said that, if a reader is looking for a high angst reading experience, Gold Ring of Betrayal is hard to beat.  B+

This book is released as part of the Harlequin Treasury series, digitally republished books that were formerly released in print only.  This month Harlequin has released over 2000 books into the market. At Amazon, it’s easy to find these titles. Simply search the Kindle store with the words Harlequin Treasury. Barnes and Noble isn’t as easy. Readers have reported that they run the search at Amazon, find the title that they want, and then search by title at Barnes and Noble. There is an advanced search function at BN but I haven’t been able to get it to work.