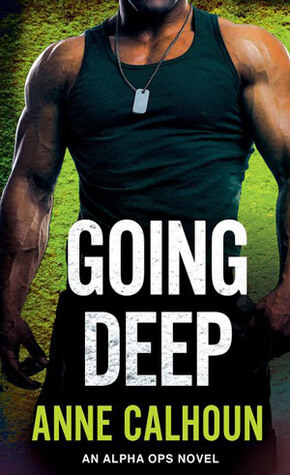 Going Deep is the second full length novel in the Alpha Ops series. I hope there will be many more because I really enjoyed this one. It had all the elements I know and love from your work, including interesting and likeable characters, a tight suspense plot and a sexy and compelling romance.

Cady “Maud” Ward is a rising pop star. Discovered when busking on the street outside a concert venue, she has just come home to Lancaster for a Christmas holiday after a lengthy and exhausting tour. She is at something of a crossroad in her career. The record label has spent big dollars on getting the best songwriters to contribute to her next album – it is all recorded and produced and the label is planning a February “surprise” release. But Cady is beginning to feel that the album is not the right thing for her. She wants to write her own songs and make an album which will be more about enduring. The problem is, it may be too late to pull out of the existing album and in any event, she has no actual songs ready to go to make  a new one. She’s hoping the break will lead to an end to her songwriter’s block and help her make a decision on the next phase of her career.

The final date in her tour is a hometown concert. Eve Webber, the heroine from Under the Surface, is good friends with Cady and she and her lover Matt Dorchester of the LPD are in attendance. So is Officer Connor McCormick. He’s working security at the venue for the LPD. After the concert finishes, Conn and Matt arrest an overzealous (and drunk) fan who gets way too close to Cady. Chris, Cady’s manager insists Cady hire security while she’s in town – he has a thick file of threatening and horrible posts, tweets and emails and Cady is too famous to rely on her perceived safety in being home in Lancaster.

Conn is a big guy. He’s six foot five and muscular, with a heavy build. He also has something of a temper and this has gotten him into trouble at work before and led to him having to take mandatory anger management classes.

He wasn’t anything as simplistic as “hot.” Instead, he was compelling, made you look twice, then keep on looking in an effort to know more, trying to figure him out, catch his attention, keep his interest.

He’s a good, solid cop though. The day after the concert he is called into work to be told by his Lieutenant that he has been accused of severely beating a gang member he arrested. Conn didn’t do it and his Lieutenant is clearly on his side, but he has to investigate it and keep Conn out of the way while he does so. Cady’s need for security and Conn’s situation mean that the Lieutenant has assigned Conn as Cady’s bodyman. I criticised Explosive Forces for the way it handled a similar situation – the hero there was accused of arson he did not commit and his mentor/supervisor immediately and completely thought he was guilty. I didn’t buy it. Here, the reaction from Conn’s Lieutenant made absolute sense to me. He was supportive of Conn but warned him not to go off on an investigation of his own. Conn was potentially in a lot of trouble. His Lieutenant didn’t believe the accusation but he still had to investigate and follow the evidence. This felt right to me. It created the necessary tension in the story without making me roll my eyes in disbelief.

Deliciously, Conn’s new assignment also puts him and Cady in very close confines. They are attracted to each other from the start and acknowledge it. Neither initially intends to act on the attraction but after a little while, Cady decides to go after what she wants. I liked Cady a lot. She was a forthright, take charge kind of person who wasn’t ashamed to ask for what she wanted from Conn. Conn is bowled over by her straightforward proposition and unable to resist.

Cady’s younger sister Emily is 16 years old and a budding young fashion designer. Cady wants to spend time with her mother and sister while she’s at home and she’s especially promised Emily some sister time. Conn’s presence makes Emily resentful. I think you captured the awkward not-quite-an-adult-not-quite-a-child phase well. Conn’s observations about Cady’s family and how it was imperfect enough to feel accessible to him felt authentic.


The threat to Cady after Conn begins his assignment is apparently more psychological and personal rather than overtly violent. It’s still a big deal of course, but there was (mostly) no sense of imminent threat so I had no problem with Cady and Conn getting physical. He always had an eye to her safety and there wasn’t any foolish behaviour by either of them. Cady’s resistance to security cameras was explained and the way that issue panned out made sense to me all round.

Cady and Conn fall for each other quickly but I didn’t have any trouble buying the romance. They were living in each other’s pockets for weeks and a lot of their time together was when there was no exigent risk. They had time to get to know one another. For different reasons, both are observant people. They quickly worked out what made the other tick.

He threw looks like most people threw punches—hard, fast, aiming for a TKO with every look—but all she could see was the vulnerability, the need, the plea underneath the look, the gray in his eyes.

It wasn’t hard for Cady to see that Conn’s sense of isolation sprang from a childhood spent bouncing around from one distant relative to another after his mother died and his dad took off. Until he joined the LPD, Conn never felt like he had a family of his own. He has good friends but he’s always kept himself slightly apart, not wanting to get in the way. He doesn’t assume belonging. I could relate to it. His deeply held desire for family and connection is met in some ways by the LPD but his expectations outside of the department are fairly low albeit desperately craved.

Anyway, it didn’t satisfy the urge for a family of his own, the one formed in partnership with the woman he loved, the children they made together. It was the dream he’d always had and never thought he would fulfill.

The relationship between Conn and the LPD and how it fits into the romance and the suspense was neat without being cute and, again, entirely in character.  Both Cady and Conn are smart and the things they do make sense in the story. There wasn’t anything shoe-horned into the book because the plot required it. It all fit together.

How the happy ending is achieved celebrates who Cady is and fits with who Conn is too. Conn tends to speak with his body rather than his voice but Cady is consistently upfront.

She’d met people who talked all the time about nothing, people she could easily tune out. Conn fell into the other camp, barely saying a word but his body talking all the time.

There is an aspect of the suspense plot which felt a little undone. On the one hand, the main story was told and it was enough, on the other, there was still some risk to the HEA depending on how things worked out. Otherwise, Going Deep was a smart, sexy and superior romantic suspense. I liked it very much.