REVIEW: Girl of Fire and Thorns by Rae Carson

I remember first hearing about this book when it was sold.  The title was so evocative, but then I forgot about it because it is a YA book and while I’ve enjoyed my share of YA books, my preference is to read adult romances.  This YA book has a slight romance in it, but it’s not a romantic story by any stretch of the imagination.  I held off reading it despite being urged to read it by various reading friends.  Finally, I caved and I am so glad that I did. 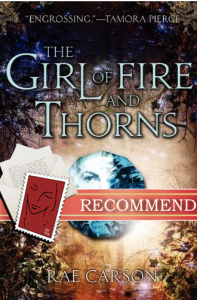 I don’t know if I can convince any of my hardened romance reading friends to read this. After all, it took a concerted effort by a number of my reading friends and I actually got it for free from Net Galley, but I’ll do my best to explain why this book is worth the time of any reader, including those who primarily love romances.

The plot is fairly simple. A reluctant young woman is chosen for an unknown destiny. She is separated from her family, is placed in great danger, and must find herself in order to triumph.

Princess Lucero-Elisa of Oravalle is the younger of two sisters. She’s fat and unattractive but she was born with a Godstone in her belly, a mark that comes only once a century.  This is a  mark that means she is destined for greatness.  The story opens on the day of Elisa’s marriage to King Alejandro de Vega, the king of the desert country, Joya d’Arena.  Elisa believes (and rightly so) the only reason that she is being married to this handsome king is because of her Godstone.  Her sister, Juana-Alodia, is so much more capable and ready to be Queen.

Prayer candles flicker in my bedroom. The Scriptura Sancta lies discarded, pages crumpled, on my bed. Bruises mark my knees from kneeling on the tiles, and the Godstone in my navel throbs. I have been praying—no, begging—that King Alejandro de Vega, my future husband, will be ugly and old and fat.

Elisa is a mass of nerves and insecurity but never sulky and her self pitying comes across as more self deprecating than whiney.  If Alejandro is ugly, old and fat then maybe he will come to love her or at least she will have “a reason not to care when he turns away in disgust.”   She’s studied Belleza Guerra (a type of Art of War) but she is no good in the drawing room or deciphering political intrigues.  While there have been a plethora of naive, innocent, shy heroines in romances and YA books, oftentimes the character comes off as contrived.  Her beauty is hidden by a bad haircut and glasses.  Her shyness easily disposed of under the bright sun of a popular boy’s attention.

This is not the case here.  Elisa’s naivety and insecurity seep through the pages.  Her perceptions are that her sister, Julia, has only distaste for her.  That her father is happy to send her off at the age of 16 despite his love for her.  Her new husband wants to keep their marriage a secret and she can see that he shares a closeness with a woman in his court, a woman whose beauty Elisa could not begin to compare.  Moreover, it seems that once outside her own kingdom, everyone knows more about the Godstone than she does. But her husband does want and need a friend. And Elisa manages to gain the respect of a few in her husband’s court.

So she is fat, unattractive, and away from everyone who loves her. Her sister’s last words to her were to trust no one from Alejandro’s court. It is good advice for everyone wants Elisa’s Godstone.

As the story progresses, Elisa transforms from the inside out.  She must in order to survive.  The people that come to love her do so because of her determination, her courage, and her willingness to fulfill whatever destiny has in store for the reluctant heroine. Her looks become unimportant for Elisa is a person with agency and thus her skin, her weight, her looks are merely the covering of the vessel full of love, courage and faith.  There is one poignant scene where Elisa is confronted with admiration by someone in her past who looks upon her differently because of her physical changes.  Elisa sees in that person weakness she had not perceived before.

Elisa’s growth stems from the challenge to her faith. The Godstone is tied to a prophecy that everyone in the land believes. And if Godstone’s exist, then so must God, the creator of the stones. Once outside the walls of Elisa’s own country, though, she experiences the horror of battle, of loss, and of betrayal. She begins the common questioning of her faith by reassuring herself in the surety of God’s goodness only to see that goodness fail her.

In her own way, Elisa is decisive. Maybe it’s the result of being raised as a princess or perhaps it is just an inner confidence born of being the Chosen. When called upon to make tough decisions, Elisa does not waver.  But when her faith and belief in the spirituality of the Godstone is challenged, when she learns that there have been failed bearers before her, she rises to the challenge.  While Elisa might not be pretty or facile she is determined to fulfill whatever role she is to play as the bearer of a Godstone.

There are a host of interesting people in the story from the sullen Cosme’ to the stalwart Lord Hector, Alejandro’s personal guard and every one  of those characters are nuanced, neither wholly good nor wholly bad.

One thing I was surprised by how subdued the “god” presence was in the story. I know that the question of faith was important but I felt like we moved to quickly over passages where Elisa could have had real doubts that it lessened the impact but that was only a minor complaint.  This is clearly the first in a series. There is definite resolution at the end, but there is a lot more of Elisa’s story to be told.  I can’t wait.  B+