At first impression, your debut novel is a YA paranormal. It has a lot of the trappings. After a life-changing event, a girl develops unusual abilities. She has to choose between a couple guys. But I think applying that label and reducing it to those tropes does it an injustice. This is one of those cases where the whole is more than the sum of its parts. 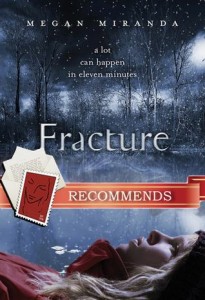 Delaney Maxwell is just a regular high school student. She’s the top of her class and aims to be valedictorian. She’s not athletic and dare I say it, is a bit clumsy. She’s best friends with her next-door neighbor and childhood friend, Decker, but their relationship has been tense since he caught her making out with his guy friend. All in all, it’s an ordinary life.

Then one day, she falls through the ice covering a frozen lake. Delaney’s rescued but she was under for 11 minutes. In fact, she was clinically dead. Nearly a week later, she wakes up from a coma to find her life changed. Her brain is so damaged, she shouldn’t even be functional. And yet she walks and talks with no difficulties at all.

But despite surviving her brush with death, Delaney’s life starts to fall apart. The accident reveals the faults in her relationship with her mother. The tensions with Decker come to a head. And inexplicably, she’s drawn to death. And I don’t mean figuratively. She gains the ability to tell when someone is about to die. This dawning realization misleads her parents into thinking their daughter is going crazy.

Then Delaney meets Troy, an older guy who also had a brush with death and spent some time in a coma. He shares her ability to sense death. Desperate for someone to understand what she’s going through, Delaney begins to spend more time with him. But the more she gets to know him, the more she realizes that shared experiences don’t always mean same perspectives and Troy’s outlook on life may be a bit darker.

I was surprised by this book. In an extremely good way. I went in expecting a pleasant read and instead got a thought-provoking story about life, death, and all that comes with it. The novel has a very powerful message, one that I both appreciate and find beautiful.

Delaney is a great protagonist. She’s very real and very flawed. I liked how driven she was to excel academically and how her confusing relationship with Decker showed all the insecurities a teenage girl may have. I found her voice very engrossing:

There are certain things kids must know depending on where they grow up. When my parents took me to Manhattan last summer, I saw kids half my age navigating the subway while Dad squinted at the map on the wall, tracing the colored lines with his finger. Maybe kids in the desert can drain the water from a cactus. I don’t know. But here in northern Maine, we know how to treat hypothermia, we know how t o prevent frostbite, and we know how to rescue someone who has fallen through the ice.

The description of how Delaney was rescued from the ice was very visceral, even secondhand as Fracture is told in first person POV and other people told her what happened. I could easily imagine Decker’s panic. I could see the other kids calling the police and running for help.

I loved the relationship between Delaney and Decker. They’ve known each other since they were kids when Decker declared that he would make her smile. Even her mother used to babysit him. There’s a familiarity in their exchanges that only comes with time.

“Seriously? French over food?” Decker didn’t take French (Spanish was more useful, he said). I held the receiver between my shoulder and chin and didn’t stop writing.

“Call Monday after the precalc final.”

“You can’t take a thirty-minute break?”

“I have three words for you, Decker: four point oh.”

Delaney and Decker are stuck in relationship limbo. Until the couch incident with Decker’s friend, she’s never had any real attention from other guys. She knows Decker is more important to her than that of merely a friend but she’s afraid of taking the next step. When you’ve known someone for so long, all the little incidents and minor occurrences that happen over the course of that relationship can add up and do a number on your confidence. I can definitely sympathize with Delaney here.

Similarly, you can tell Decker has feelings for Delaney, even from her point of view, but he doesn’t seem to know how to climb over that “Just a friend” wall. To say that Delaney’s near-death experience shakes him up is an understatement. He didn’t know how to handle the possibility that Delaney might never have woken up from her coma, and he’s frustrated that there are so many things he now doesn’t understand about his best friend.

I thought the depiction of Delaney’s family was really well done. Her accident revealed a lot of family secrets about her mother’s background and parents. Prior to the accident, Delaney never would have thought to question or wonder about these things because she’d never had a hint of their existence. We’re clearly shown how her mother’s past and relationship with her parents affect her relationship with Delaney. And even though it’s told through Delaney’s eyes, we see her mother’s panic over the possibility of losing her daughter in more ways than one.

Above all, though, I liked how this novel explores death and reinforces the idea that you must seize life because you never know which day will be your last. Accidents happen all the time and you can’t control them, no matter how much you may try. Life is both random and cruel. Someone who should die doesn’t, and someone who shouldn’t die does. Delaney tries to come to peace with this fact. Troy, on the other hand, has let it poison him:

“This, this” — he waved his arms around his body, trying to capture the entirety of Earth in his gesture– “is a punishment.”

“For me, for driving that goddamn car off the road.” My stomach clenched. That hadn’t been in the article. “For getting stuck. For killing my entire family. For not being able to help them. God wouldn’t let me die. So, you tell me, what did you do? Why didn’t you get to die?”

Decker didn’t let me die, only he didn’t do it out of hate. But I didn’t tell Troy that. I let him keep his grief. It was all he had left of them.”

Fracture is less paranormal and more medical mystery. We don’t know why Delaney appears normal despite the amount of brain damage she received. And truthfully, we never learn why because the human body is more complicated than that. Yes, she gains the ability to predict death but that’s not really the point. Society in general fears death but if you’ve lived a long, fruitful life, what is there to be afraid of exactly? I really enjoyed this story of how one life-changing accident reveals all the fault lines in our relationships and in our life, and I’m looking forward to your next novel, whatever it may be. B+