Fair Game was one of my first reviews for Dear Author and it remains one of my favorite romance reads. When I heard you were planning to write a sequel, I was both thrilled and apprehensive. Thrilled because I looked forward to spending more time in the setting you had created and seeing how Elliot and Tucker were doing as a couple, but apprehensive because the book had worked well for me as a stand-alone and I’m starting to weary of the trend across romance subgenres to write series rather than individual books. Nevertheless, I couldn’t resist and I had to read Fair Play. 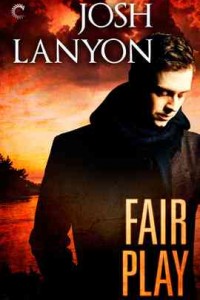 Fair Play begins six months after the end of Fair Game. Elliot continues to teach American History at Puget Sound University and Tucker continues to work for the FBI. Elliot and Tucker are basically living together in Elliot’s place on Goose Island, although Tucker still has his apartment in Seattle.  The other major development is that Elliot’s father, Roland, has actually finished his memoirs about his life as a 60s radical, and someone doesn’t want them published. Roland’s house is deliberately set on fire and Roland barely escapes with his computer and essential papers. Elliot wants to investigate, which brings him into conflict not only with Tucker (who wants him to leave that sort of thing to the professionals) but also with his father, who is clearly hiding all kinds of information.

The storyline unfolds along these two paths: Elliot and Tucker obviously love each other, but they’re still working out life together and the compromises needed to make a relationship work. Elliot has adjusted better to life after the FBI but he chafes at the restrictions entailed by being an outsider and Tucker’s reluctance to bring Elliot into his confidence. Some of that reluctance feels appropriate given Tucker’s professional position, but some of it struck me as over-protective.

The heat level of this book is higher than the level in Fair Game and the sex scenes are more detailed and explicit (although there aren’t that many in number). The biggest change is that the relationship now has a D/s aspect. This shift isn’t purely grafted on; it interacts with Elliot and Tucker’s power dynamic outside the bedroom, and the way they negotiate their roles makes sense given other aspects of their personality. But I found it pretty unexpected because it’s not foreshadowed before we get to the first scene, and apart from a couple of ambiguous sentences in Fair Game (which could have been about power in relationships generally, not necessarily D/s), there’s nothing to cue the reader about this change.

If this is your sort of thing, reader, it should work for you. My favorite Lanyon couples are those where the both the external and intimate power preferences are coming from the same place for both characters, and I put Elliot and Tucker in this category, so it’s not a direction I particularly wanted to see them go. I like reading romances in which two strong-minded people butt heads and come to terms with having to compromise on that in different aspects of their lives. But that’s totally my personal preference for these characters.

The second storyline is the mystery surrounding the fire at Roland’s house and its connection to his radical past, raising past and present issues between father and son that are sensitively explored. The 60s and 70s milieu is well depicted, and I enjoyed the way the mystery was unraveled through the personal experiences of Roland’s circle of friends. I think I saw the solution coming but not too far in advance, and I definitely fell for some of the red herrings along the way (which I enjoyed; I like misdirection).

There is also a brief subplot about Tucker’s family background, where he comes to learn more about his mother. It provides greater insight into Tucker and highlights the different experiences and psychological baggage Elliot and Tucker bring to their relationship.

Lanyon’s skill in creating a rich, plausible world is on full display here. I loved the scene in which Elliot has to remind himself that it’s a different semester and so the young woman in front of him isn’t Mrachek, Leslie (from Fair Game) but Miller, Liane. The president of Pugent Sound U. absolutely reminds me of administrators I have known, and the aged 60s radicals feel pretty familiar too. For readers who don’t know that much about the US in the 60s and 70s, this is a good window into the period, and the characters run the gamut of plausible types.

By the end of the book we have three different resolutions with varying degrees of completeness. Elliot and Tucker are in a better emotional place, individually and together, Elliot and Roland continue to have a contentious relationship but an enduring, loving bond, and the original, subsequent, and past mysteries are solved. The reappearance of Fair Game’s serial killer (locked up but still interested in Elliot) and the introduction of a talk radio guy (also interested in Elliot) both suggest that there will be another installment in the series. Again, I have mixed feelings. I’m less interested in Elliot and Tucker’s personal relationship at this point (I’m happy for them but I don’t really need to see the details) but I want to know who the next Mrachek, Leslie is and I want more of Elliot as the reluctant professor. And more Roland. Sorry, Tucker, but I know you value honesty. Grade: B+