I’m so glad I waited until now to read “Empire of Ivory” even though I’ve had a copy in my hot little hands, well actually piled on top of my TBR heap by my computer, for months now. Something told me to wait, to keep it in reserve until closer to the date when book five will be released. But after the emotional roller coaster of this book, I think I’ll need a little while to process, digest and prepare myself for what’s in store for Laurence and Temeraire. 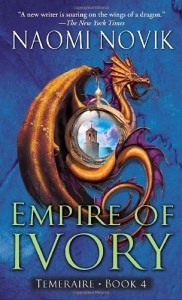 I can’t imagine anyone being able to just pick up the series at this point without having read books 1-3. There’s so much history all ready. So many great characters we’ve met, so much world building you’ve already – for lack of a better term – built up. I think new readers would be floundering as well as missing so much of the richness that makes reading these books such a delight.

The journey of Temeraire and his crew from China is at last over – and from my last letter you know that I found parts of that just a little bit slow. Now they’re finally in sight of England’s coast and as bewildered as I was as to why they’ve seen no other dragons on patrol much less received any response to their flares sent up in desperation as the French dragons harry them across the Channel. The news they finally learn is heartbreaking as well as ominous. How can the entire British Aerial Corps be saved? How can news of what’s happened be kept from Napoleon and an invasion be held off? And once there’s the faintest hope, will the desperate efforts of Lily, Temeraire and the other dragons of their formation be in time?

I applaud you for not holding back in terms of danger and intensity in this alternate reality of the Napoleonic wars. It’s easy, while reading books that stick to what really happened, to be aware of the outcome of battles and not worry too much. You keep readers on their toes by inserting new battles and changing not only this war but subtlety altering much of world history – as evinced by the details of Africa and Laurence’s throw away line about Peru and the Incas. While reading these books I can never totally relax since for each hard won two steps forward, you seem to delight in dragging everyone back at least a full step if not more.

With the return to England, we get to see more dragons and once again witness the devotion between them and their captains and crew. It’s something I had missed in “Black Powder War.” Of necessity we also get more politics and, to my regret, I must say that parts of the story in England and again in Africa – while rich in detail – did tend to bog down again in perhaps too many descriptions. The pace at times lost its intensity.

However, once back in England things picked up nicely. At least until the meeting with the Naval Lords when I was as appalled as the other dragon captains at what had been done. Really, Laurence and Temeraire’s actions after that were inevitable given Laurence’s sense of honor and Temeraire’s sensitivity as a thinking being. And the results are what has left me wrung dry and likely to lose sleep while awaiting the next book. Oh you evil woman. What will happen to Laurence? What will poor Temeraire do? And can I possibly survive until I know? Guess I have no choice but to hope we get an arc way before the publication date of “Victory of Eagles.” B+