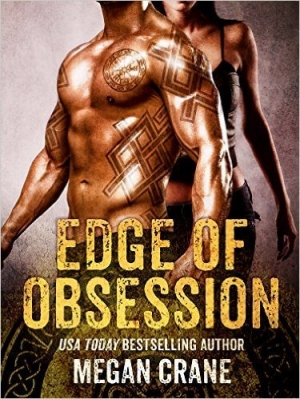 When I started reading your new book, Edge of Obsession, my first thought was that it was eerily familiar. Then I realized that was because my introduction to reading romances was with such classics as The Wolf and the Dove by Kathleen Woodiwiss, and Fires of Winter by Johanna Lindsey – old school historical romances with Vikings, Saxons, and assorted clansmen. You know the type – the marauding invaders who kidnap the women and have their wicked way with them, eventually becoming enslaved by their own feelings. While this story is not a historical romance, it has that definite medieval feel to it despite being set in a post- apocalyptic world.

In this setting, storms have ravaged the earth, cities have fallen, the sea has risen and buried the coastlines (shades of global warming!) and there are pockets of people living a hand to mouth existence. There are kings who rule their small territories, priests who lament the age and warn of dire consequences to come if their precepts aren’t followed, and mercenaries who raid and plunder. Power, electric power that is, is a sought after commodity as it is hoarded by those in control.  In this world power IS power.

Into this maelstrom falls our heroine, Helena. She’s the descendant of a family that has been working for generations to find the remains of two power plants, using an ancient tablet computer full of maps that detail the world before the Storms.  Her ultimate goal is free the people from their reliance on the men who control electricity by making it accessible to all.

For two years Helena and her sister have been on the run from a mercenary named Krajic, the man who murdered her parents and will stop at nothing to retrieve the tablet she carries. They’ve holed up with a small group led by a weak and small minded king  – necessary to their winter survival when storms rage for months and those caught without shelter don’t survive.

Fearing that Krajic has  caught up to her once again, her relief at finding the band of raiders that has infiltrated her current home is not Krajic and his men makes her bold – too bold. Seeing Tyr, the war chief in all his glory strikes in her an absurd feeling that this man might be her only chance to escape Krajic and help her move forward with her quest.

The world building in this story is good – concrete descriptions of the setting, the ravaged earth and the harsh reality of life as a result. There is a definite contrast between the living quarters of the majority of those eking out an existence versus the almost opulent settlement where Tyr lives. It’s clear that they are the ‘haves’ in a ‘have-not’ world, despite the rumors that would imply otherwise. Being modern day Vikings, their ships and the sea are key to their existence and that is keenly felt. The descriptions of the prevailing beliefs of the time, the societal views and norms are clear and well described.

Sex is a commodity in this world, to be bartered, traded or simply taken as due (depending on your fortunes). For the ‘civilized’, as decreed by the priests, there are winter marriages, joyless breeding between a couple for the sake of bearing children. One can be married to someone one winter, and someone else the next. The opposite extreme is the life lived by the raiders, where lust rules in all its forms.

Having experienced up to now only the sex of a winter marriage, Helena has heard rumours of the orgies experienced outside of settlements. As it turns out, those rumours were pretty accurate, as least as far as the sex is concerned, if not the rest of the frightening tales told to children about the world of the lawless. Voyeurism, exhibitionism, multiple partners – it’s all part and parcel of an easy night by the fire for the raiders. They have a following of camp girls (reminiscent of any army), a willing harem of sexually unrepressed women with whom to sate themselves.

In this story, all the sex is consensual (in deference to the reader’s sensibilities no doubt), so not realistically what would more than likely happen in this scenario, but one that is socially acceptable for us. And whoo, boy, is that sex dirty, dirty, dirty! It’s safe to say that those 80’s historicals were like children’s books in comparison.

Our girl Helena is shocked – at herself mostly, for finding the scenes around her exciting and titillating. After years of sexual repression she doesn’t know what to watch first, only that she can’t help herself. (Of note – there is a brief mention of an herbal concoction Helena takes to avoid pregnancy but nothing about prevention of sexual disease, which considering the amount of sex some of these people are having leads me to assume it’s either too rampant to mention or it was eradicated before the latest civilization collapsed).

Tyr comes across as a pretty predictable alpha male character. He’s his king Wulf’s right hand man, his trusted confidante and friend. He’s got the prevailing attitude towards women that all his brothers have. That Helena challenges him on a visceral level disturbs him – he doesn’t want to be intrigued by her. He works hard in fact to reduce her to a sexual object.  And there is no mistaking that she is his captive. Her life is in his hands for better or worse. He is loyal to Wulf, and wouldn’t hesitate to kill her on the spot for betraying him and his people. Her defiance of him, her unwillingness to tell him the truth, grates. Yet instead of punishing her he waits, begrudgingly admitting to himself that he respects her loyalty to whatever is keeping her from telling him her secrets.

Helena on the other hand is a bit more ambiguous. On the one hand she appears strong in the face of adversity, having protected her family’s secret for years.  But in Tyr’s hands she loses a bit of that strength, seemingly overcome with her lust for him. She starts to get a bit too compliant in my eyes, losing some of the fight that we see in the beginning. I would have liked to see her continue to challenge Tyr verbally, if not physically. Once she’s given up the secrets that she carries, (because it’s only a matter of time, really) she becomes more of a pawn in the game. The plot takes some surprising twists then, and we get some good old fashioned bloody violence to round out the story.

True to its billing as a romance we get a happy ending for the couple in which they admit that they love each other (which is surprising in the sense that love doesn’t seem to have had much to do with their relationship to this point), and all’s well that ends well – for now. There is definitely more to be told as Helena’s quest is not finished and Tyr’s brothers in arms deserve to find true mates and not just willing women.

I found this to be quite an entertaining story, smoothly paced, heavy on the sex, but with an interesting and engaging plot. I recommend it, and rate it a B+. I look forward to reading more in this world you’ve created.