I was in happy-making-trope heaven with this story. A cold, proper hero, check. A heroine he can’t possibly marry, check. A double life, check. It could have been written for me! 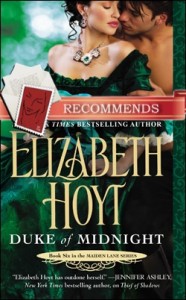 For readers who haven’t previously tried the Maiden Lane series, this sixth book would be an excellent place to jump on in — although there are some recurring characters, it’s the first since book one that doesn’t contain major threads from previous stories. You will encounter one series spoiler, but it’s nothing you won’t learn just from reading the book blurbs. (If you have resolutely not read any of the blurbs to this point, leave this review now or forever hold your peace.)

The series revolves around a mysterious vigilante character known as “the Ghost of St. Giles” — and as has become clear, there’s more than one of them, and a ghost is often the hero of whichever book you’re reading. (St. Giles was an extremely poor, crime-ridden area of London.) I originally called the Ghost “a vengeful Georgian Batman,” and Hoyt plays with that conceit even more than usual in this book, providing the current Ghost with a vendetta, an Alfred, and even a sort of bat-cave. Despite that bit of whimsy, the overall tone of the book is pretty somber. Our heroine Artemis is facing an insecure and lonely life, as circumstances frequently conspire to remind her. Her beloved twin brother is locked up as a madman. And having witnessed his parents’ death as a boy, in true Batman fashion, Maximus feels compelled to avenge them and to live up to the dukedom he inherited. Which means not marrying a lady’s companion with a brother in Bedlam, no matter how much he cares for her. Maximus is also facing a lonely life with his appropriate chosen wife, even if he refuses to acknowledge it.

The emotion in the story at first comes from the fact that these two are falling for each other while they’re officially barely acquaintances. Maximus is courting Artemis’s cousin and employer, Penelope; Artemis is dutifully being a proper companion. Then Artemis meets “The Ghost,” changing Maximus’ view of her forever:

She’d dared to draw a knife on him in the worst part of London, had stared him in the eye without any fear at all, and it was as if she came into focus. Suddenly her edges were sharp and clear, standing out from the crowd around them. He saw her.

As their attraction grows, all unspoken, into what Artemis thinks of as “a peculiar relationship,” they become capable of causing strong emotions in each other. The quiet intensity of the desire or hurt feelings that can’t be acknowledged is really stirring.

Even after things come to a head between them, so to speak, their relationship continues to be vague:

He shifted finally, swiveling his head to look at her over his shoulder. “Don’t call me that.”
“What?”
“Your Grace.”

His reply made her want to cry, and she didn’t know why. He was… something to her now, but it was all so complicated…

Artemis thinks this after they’ve already slept together, making it all the more poignant.

Since this is a book featuring a starchy hero, of course part of it will be about his losing control over himself as he falls headlong in love. But it’s also about Artemis slowly throwing off the chains of propriety to become more and more her true self, the “goddess” Maximus thinks of her as — til by the end of the story, she does something so reckless and brave, I was swept away with admiration.

I’ve been doing so much out of the box reading lately, it felt really comfortable and homey to be back in the land of the solidly written European historical. There’s nothing especially new about this story, but it’s emotional and intriguing — I didn’t even hate the mystery element, except for one moment in which Maximus was a real doof. There are quite a few minor loose ends hanging out for future stories, so if you’ve been thinking about trying this series… come on in, the water’s fine. B+