Last year’s On Dublin Street was one of my Top 10 picks of 2012, so I was most eager to read Down London Road. I’m delighted to say that I enjoyed it as much as I did On Dublin Street. 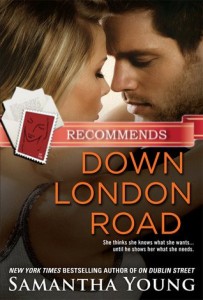 Johanna Walker is a young, smart woman who has been handed a difficult lot in life. Her abusive father left when she was young after abusing her and her mother for years. After his departure, her mother fell into alcoholism and became not just a social drunk, but a 24-hour a day drunk — and a verbally abusive one at that. This leaves Jo to pay all the bills to keep them afloat and raise her younger brother, Cole, who is the light of her life. Jo works two jobs, in a solicitor’s office and as a bartender at a popular bar. She also dates older men, most of whom have money. Jo isn’t interested in marriage, but she does appreciate the gifts and money that dating a rich man can bring. She’s been with Malcolm for quite some time. Malcolm is very understanding of the chains that bind Jo to her family and is really reasonable about the demands of her life. He’s undemanding and easy going. As a result, Jo bends over backwards to keep Malcolm happy.

At a gallery showing of an artist friend of Malcolm’s, Jo makes eye contact with a man who she has an overwhelming attraction to. He’s handsome, tattooed, and dressed very casually for the event. Their eye contact is extended, and what I’d describe as “eye-fucking”. Jo is both aroused and horrified by her reaction to this mystery man. When she’s introduced to him as Cameron McCabe, the boyfriend of Malcolm’s friend the artist, she embarrassed to have had the reaction to him. When he basically calls her a whore for dating an older man with money, she’s furious and outraged. How dare this man whom she’s just met presume to know her? But when Cameron says he’s looking for work, somehow Jo’s mouth gets ahead of her and she offers to speak to the manager of the bar where she works. Sure enough, Cam is hired immediately at the bar, and now Jo has to deal with seeing him regularly.

Cam notices that Jo always has her cell phone, and assumes that she’s seeing someone on the side, besides Malcolm. Of course, Jo keeps her phone with her because her mother is a fall-down drunk and her brother is young and often left home with her, since Jo has to work. She needs the phone with her in order to be sure she’s available, should Cole need her. When Cam finds out that he’s wrong, he does apologize, and Jo tentatively accepts, but absolutely does not forget what he said. When Cam moves in downstairs from Jo’s family, he becomes party to all of Jo’s problems. Her mother strikes her brother one night while Jo is out, and Cam comes to the rescue. When he angrily confronts Jo about leaving Cole in her mother’s “tender” care, Jo’s entire story tumbles out. Cam’s compassion kicks in immediately. He and Cole seem to have a connection, so he offers to keep an eye out for him when Jo is not around. Soon he and Jo have struck up a friendship of sorts, albeit one that is charged with tremendous sexual attraction. Jo continues to try to pretend that she has no attraction for Cam, but she can barely look at him without going up in flames. At a party one night, they act on their attraction in a bathroom and kiss.

“Hush.” His breath whispered against my lips and he lowered his hands until they circled my waist. “You feel this too. You’ve felt it since the night we met.”

I couldn’t find my voice, lost in a mixture of exultation that I hadn’t been alone in this from the beginning and anxiety that we were doing something wrong and we’d be caught. I licked my lips nervously.

He took it as an invitation.

My gasp was swallowed by his kiss, his mouth hot as his tongue slid against mine. Stubble scratched my skin as he deepened the kiss, and his right hand glided up my side, over my ribs, until it came to rest at my breast. His thumb brushed the underside deliberately. My skin immediately caught fire and I reached for him, my arms curling around his neck, drawing him closer. I moaned into his mouth, my heart hammering, as my senses went on overload. I could taste coffee on his tongue, smell the scent of his skin, feel his heat, his strength. I was surrounded. And I wanted more.

I forgot where we were.

All I cared about was climbing inside of Cam.

Our grip on each other was almost painful, our kiss hard, wet, desperate.

After the kiss, both Jo and Cam break-up with their significant others so they can begin a relationship. But Jo has very high walls that she’s erected over a lifetime of abuse and hard knocks. She and Cam are both hot-headed and a bit jealous. And when Cam’s first love arrives on the scene, Jo immediately doesn’t take it well. She’s jealous and angry that Cam seems so thrown off by this woman’s intrusion into their lives. Will Jo be able to open up to Cam and tell him how she’s feeling? Or will she allow what’s become the most important relationship in her life wither away, as she has her relationship in the past?

This book was successful for me on a variety of levels. The first is that Jo is not always a likeable character. This is a girl who unashamedly dates men with money for the things they can provide her. She has a nasty temper, can be quite jealous and immature. But the reality of her life really balanced why she made the decisions she did. Her brother is always first in her life. She’s never caught a single break, and rather than taking the hands that are outstretched to help, she slaps them away. But she’s willing to allow these rich men to provide for her, in exchange for being an excellent girlfriend. She’s a dichotomy to me. She’s got a ridiculously good heart, but is also sometimes quite difficult to pull for. Cameron is not necessarily the best hero ever either. He’s judgmental, difficult and can be closed off at times. But you do such a good job of building their friendship and the ridiculously incendiary chemistry between the two of them, that I was desperate for them to find some happiness. This is not a heart and flowers, easy reading romance. The characters are tough to like at times, but their motivations always read purely to me, and it made them both very likable. In the end, the story ends happily and with both the Cameron and Jo having grown up and together along the way. Down London Road gets a B+ from me.