When I first heard the premise of this anthology, I was thrilled. Science fiction and dystopia stories about multicultural characters and worlds written by diverse authors? Sign me up! I say science fiction and dystopia because I’m not entirely sure how this anthology is being marketed and to be fair, the lines are blurred in the young adult genre. 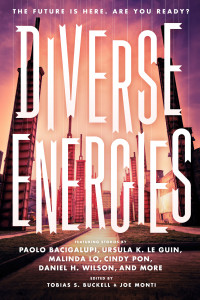 That said, while the stories featured diverse characters and worlds, I thought the overall tone of them was similar. In other words, the message I took home was that life sucks if you’re a nonwhite teenager living in the future. Because of this, my grades are more weighted towards personal enjoyment.

“The Last Day” by Ellen Oh
I approached this story with interest because I’m keenly anticipating Oh’s forthcoming Korean YA fantasy and this is my first exposure to her work.

“The Last Day” portrays a future in which Japan wages a neverending war against the West. Teenagers are conscripted into the Imperial army at increasingly younger and younger ages. The story follows two friends as they try to make their way and survive in such a world. It’s an interesting take on the influence of Western culture on a global scale.

I always say that the first story of an anthology sets the tone for everything that follows, which is why selection is so important. After completing the anthology, I have to say Oh’s offering certainly does that. It is grim and depressing. I fervently hope the Korean YA fantasy won’t be so unrelentingly dark. It’s a fitting tone for the content but it’s a beatdown as a reading experience. C

“Freshee’s Frogurt” by Daniel H. Wilson
In this story, a convenience store clerk must contend with a malfunctioning domestic robot that wants to kill him. It’s in epistolary format via a police transcript, which made it interesting. I like some narrative experimentation now and again. Overall, though, I felt ambivalent about the story. I thought it had an incomplete feel and upon further research, I discovered it was an excerpt from a book. Explains a lot. I’m not a fan of taking excerpts of books and passing them off as short stories but if you’re going to do it, I prefer it not be so obvious that is what’s going on. D

“Uncertainty Principle” by K. Tempest Bradford
What a great concept and story! It follows Iliana, who goes through life experiencing what I’d call temporal shifts. Something will change in the world but she’s the only one who notices. For example, one day her best friend vanishes and everyone acts as if she never existed at all. When the people Iliana knew as her parents are replaced by another set, she finally decides to figure out what is going on.

While this story does have a dystopian tone at its core, I consider it to be pure science fiction. Iliana is a clever protagonist, and I loved how she was determined to get the couple she grew up with as her parents back. I have a feeling that people who liked the movie, Looper, will like this story. They’re not at all the same but there’s that same sort of adventure, race against time sort of feel. A-

“Pattern Recognition” by Ken Liu
I’ve never mentioned it here but I am a big fan of Ken Liu’s short fiction. His stories always explore the intersection of the Asian and/or Asian-American experience with that of the West. Sometimes on a cultural level, sometimes on a socio-economic level, but they always leave you with lots of mental fodder to analyze and dissect.

“Pattern Recognition” is the story of children who are kept in an isolated school and solve puzzles. If you’re sensing shades of Ender’s Game, you wouldn’t be entirely wrong. A great exploration of Western exploitation of Asian countries and its impact upon the children who are at the heart of it. B+

“Gods of the Dimming Light” by Greg van Eekhout
I gathered very quickly that this short story was tied into Eekhout’s novel, Norse Code. It’s true I haven’t read that novel but it becomes obvious quickly. Basically it’s about a teen, Edward, who participates in a research study for some money. I participated in research studies like that while I was in college, so I wanted to see a science fictional take on it.

It turns out the company conducting the study is NorseCODE Genomics, which specializes in identifying the descendants of Odin. Guess who wins that lottery?

On one hand, I liked Edward’s pragmatism. What’s the point of being a hero if you can’t pay the electric bill? On the other hand, I was just underwhelmed by this story. Maybe it’d be different if I’d read NorseCODE. I’m also iffy on the idea of a Southeast Asian character being a descendant of Odin. It’s not so much the blending of cultures, but if we’re going to use mythology in a story featuring a non-white protagonist, does it need to default to a Western one? D

“Next Door” by Rahul Kanakia
“Next Door” tells the trials and travails of two homeless people as they try to find the perfect location for their next home. In this society, the divide between the rich and the poor is massive and because of the technology available to the rich, they don’t actually spend most of their time in the real world. As a result, the lower classes squat in their garages or even in their homes without anyone noticing. It’s a fascinating world.

I did like that this story featured a gay couple but the rest of it had me boggling a bit. I couldn’t decide if this was commentary on the widening gulf between the rich and poor, a trait you do find in many Asian countries, or commentary on how certain racial groups tend to fall into the lower classes. At any rate, this one left me feeling rather bleak because really, do we need more portrayals of poor, lice-infested Indian beggars in fiction? C-

“Good Girl” by Malinda Lo
Lo is fast becoming one of my favorite writers and this story doesn’t disappoint. The heroine, Kyle, is searching for her brother who vanished a few months before. Her search leads her to Nix, who claims to have information on where he went, but there’s a price.

Lo’s story portrays a future in which racial purity is idealized so anyone who’s not is ostracized. Kyle is biracial, but she can pass as pure Chinese so she hides the fact that her father was black. Kyle’s ally-turned-love-interest, Nix, is also biracial but unlike Kyle, cannot pass so she hides in the underground.

I liked this story quite a bit. I don’t think we see many modern fictional narratives about passing anymore but “Good Girl” presents a future where that would be necessary. There’s also a similar theme to that of Lo’s previous novel, Huntress, in which sometimes duty and loyalty supercedes love. B+

“A Pocket Full of Dharma” by Paolo Bacigalupi
I feel like I should like this story more than I do, considering how acclaimed Bacialupi is but I don’t. I just can’t care for yet another narrative in which Chinese people are criminals. There’s nothing wrong with the plot. I can definitely see people enjoying the story of a homeless teen getting wrapped up in a conspiracy involving the Dalai Lama. It’s just not for me. I mean, Chinese people being shady and sketchy? Wow, haven’t read that before. Maybe one day people will stop being fascinated by the organized crime of Asian countries but that day is not today, apparently. D

“Blue Skies” by Cindy Pon
This is another story in which there’s a divide between the rich and the poor. Here, the protagonist kidnaps a rich girl for ransom.

I almost thought we were going to veer into Stockholm Syndrome or captive romance territory for a minute. We don’t go there but I wouldn’t be surprised if other readers form that impression. This story was missing something. It built and built and then… ended. Maybe I, as a reader, missed something in the subtext. Regardless, I thought the resolution was abrupt and opaque. C+

“What Arms to Hold Us” by Rajan Khanna
This story was a mess. It’s about teenagers who are taken and given what I essentially think of as mining mecha. The protagonist, Ravi, gets a lucky break and finds a coveted mineral vein, so he’s sent to the front lines in the hopes he’ll find more. That in itself is fine, but then a conspiracy and rebellion get shoehorned into the narrative. While neither of these things are unexpected given the genre, they didn’t feel organic to the story. The ending tried to subvert it but overall, I was left feeling distinctly unsatisfied. Of interest to readers, however, is that “What Arms to Hold Us” is the only science-fantasy story of the anthology. C-

“Solitude” by Ursula Le Guin
Le Guin is one of those writers I absolutely respect and in whose works I can see quality and value. Unfortunately, she’s also one of those writers that does nothing for me as a reader. While I liked what this story was saying, it only confirmed that impression once again.

The heroine, Ren, is the daughter of a field ethnologist who was sent to study the native people of a faraway planet. However, the mother wasn’t able to gain access to the inner workings of the society because she was an adult. The same could not be said for her children, so she sent both her daughter and son to learn the society’s ways and report back to her.

I thought it was a good exploration of what it means to be caught between worlds. Ren was born of one culture but she was young when she began to be raised in another. How do you reconcile the two, if you even can? What does it mean to her mother, who no longer understands her daughter but is also responsible for that? She’s the one who sent Ren to learn from the native culture, after all. It was very thought-provoking and speaks to me about the immigrant experience and transnational adoptions. An excellent choice to close the anthology. B

I cannot say that this anthology lacked quality stories. Most of the stories were very good, and I think they explored the idea of diverse futures very well. I just don’t know if repeat readability is a trait I’d ever assign this collection of stories. The overall tone and feel is grim and dark, and while I do like dark and gritty stories, this was too much even for me.

→ Jia
Previous article: Guest Post: Authors Against Bullying by Mandy Roth
Next Post: REVIEW: Down for the Count by Christine Bell