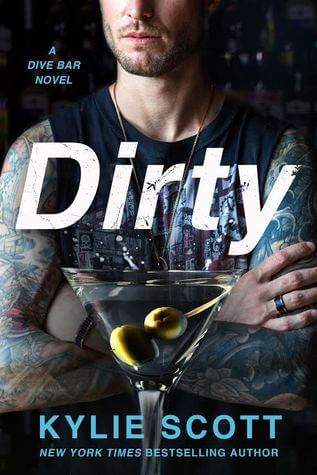 I listened to Deep recently, the final book of your Stage Dive series. In Deep, readers (and listeners) were introduced to Vaughan Hewson, the bass player for Down Fourth, who are supporting Stage Dive on tour. Spoiler alert: by the end of Deep, Down Fourth have split up and Vaughan is out of a job, questioning what he will do in the next phase of his life.

Dirty, the first book in the Dive Bar series, is the story of Vaughan and Lydia Green and how they get their HEA in Coeur d’Alene, Idaho, after the end of the Stage Dive tour.

The book begins on what should be Lydia’s wedding day to fellow realtor, Chris Delaney. Except an anonymous person has sent her explicit video of the groom-to-be boning his best man. Lydia rabbits. In a superhuman feat of determination, she makes it over the six foot paling fence at the back of her former fiance’s property and finds herself, Goldilocks-like, in the yard of a house with an open bathroom window – just right for hiding out.

To say Vaughan is surprised when sometime later he stumbles into the bathroom, naked, to find a bride dripping wet under the shower he’s just turned on, is an understatement. (Those who have read (or listened to) Deep will know this is not the first time he’s been caught naked in a bathroom with a strange woman. Interesting habit Vaughan.)

Vaughan has returned to the house he grew up in after Down Fourth broke up. He needs some time to sort things out. He hasn’t been home since his parents died some years earlier. The house was left to Vaughan and his sister, Nell, but Vaughan bought her share of the house out so Nell could invest in the Dive Bar, which she runs with business partners Eric and Pat (the latter being Nell’s soon-to-be ex-husband).

Even though Nell arranged for the house to be painted and the furniture changed over so it wouldn’t look exactly the same as the house he grew up in, Vaughan struggles to be in the old house alone with his memories. He wants some company and Lydia needs a place to stay while she works out what’s next. It’s perfect.

The bones of the story are fairly simple; Lydia and Vaughan start a get-your-mind-off-bad-things fling which is only meant to be temporary. Lydia is leaving Idaho and Vaughan is planning on heading back to the LA music scene. When Lydia and Vaughan both help out in the Dive Bar, neither of them think that will be anything other than temporary either. But romance readers know where this is headed.

“Crap. It’s your first night at work and I’m putting all my drama on you again.”

Such a long and gusty exhalation. The man had big lungs. Also, bad friends, namely me.

“On the plus side, when you get worked up your tits start heaving up and down with each breath. Magnificent. Honestly, I can’t get enough of it.” Little lines appeared on his forehead as his hands demonstrated the apparently bouncy-boob-like motions in front of his chest. “I’m tempted just to say shit to get you started, I love it so much.”

In the face of his broad grin, I had nothing.

Vaughan is not shy. He’s blunt about what he likes and dirty talk is just one of his many skills. He’s pretty much what-you-see-is-what-you-get and after her experience with her ex, this is a breath of fresh air for Lydia.

Yes, Vaughan and Lydia have smoking hot sex (and a lot of it) but they also talk. To my delight a lot of that talking was shown on the page. Even though the entire story covers not much more than two weeks, it was this talking which convinced me that the HEA was going to stick. Because I saw them become friends and support each other and accept each other and want the best for each other as well as having stupendous sexual chemistry.

“That was a trap. You lifted your arms up,” he grumbled, brows turned down. Never had a man looked quite so oppressed. “What was I supposed to do?”

“A trap? You think I’m trying to trap you?” I wrinkled up my forehead. “Vaughan, I’m genuinely beginning to get concerned about your breast fixation. Seriously. How can you function when any hint of tit sends your brain into a coma?”

“You were staring at my ass earlier. You don’t see me telling you off.” He cracked his neck. “And anyway, it’s only happened with you. I’m fine around every other rack. I can discreetly appreciate and move on. Yours are different.”

Even though Lydia has been living in Coeur d’Alene for some time, she hasn’t really made any friends. The wedding guests were all business associates or or friends of the groom or his family. It’s clear that Lydia’s hasty engagement to Chris was more about her wanting to fit herself into a desired lifestyle (marriage, home, security, family) than because it was healthy or good for her. Chris didn’t accept her or particularly care for her (as is obvious by his lies if nothing else), was critical of her weight and Lydia felt constrained the whole time she was with him. She couldn’t be herself because herself wasn’t good enough. With Vaughan and in the Dive Bar, she finds friends, acceptance and real family and home. What interested me was that she only found it when she stopped caring what everyone else thought and started to please herself (in a healthy way, obvs). That made sense to me because it allowed her new friends to know the real her and for their relationships therefore to be authentic.

“I didn’t like you trying to hide parts of yourself from me.” Vaughan stared at the wall. “I’m not like that asshole, picking and choosing which bits of you suit him and expecting you to change the rest. I’m into you, Lydia. All of you.”

Lydia has cellulite, a big ass and a tummy, as well as big boobs. Vaughan loves all of her body and is completely uncritical of it. (This fits with my own experience actually – guys generally don’t seem to care about what we perceive as bodily imperfections anywhere near as much as we commonly fear.)

There is a lot of humour in the book and I found myself laughing out loud in parts.

Joe appeared to be a mountain-man-bartender crossbreed. A Viking throwback, maybe. He was a big guy with big shoulders and a big blond beard. Clearly, there were far more northern Idaho sex gods than I’d given the region credit for. Further classifications were going to be required. If Vaughan topped the super-cool category, then maybe this new guy should win on the lumbersexual front. Given my abrupt return to singledom, I’d have to give this important man-classification system more thought.

Lydia is delightful and so much more interesting when she’s not all buttoned up trying to pretend she’s someone she’s not.

I liked Lydia’s friendship with Nell as well as her burgeoning confidence in herself. I liked that Lydia didn’t feel the need to tell Vaughan what he should do, think  or feel but let him work things out himself. She was just present, so that he could talk or not talk to her about what was in his head, without judgement. He did talk to her but my impression was that was because she gave him a safe space to do so.

There’s also a more serious message in the book, perhaps encapsulated by this line:

“When something is no longer working, changing your plans is not giving up. It’s not failure.”

This resonated with me and gave the novel a lovely pathos.

My only real criticism of the book is with the set up. Chris and his best man were the only gay characters in the entire story. To say the least, the way they were portrayed was hardly sympathetic. I can see the story would have been very different if Chris had been cheating with a woman but still, the way queer characters were portrayed made me uncomfortable. I wish that the set up had been different, or at the very least, other queer characters were included so as to paint a fairer picture. It wouldn’t surprise me if this draws strong criticism in queer circles and I can’t say as I’d disagree. I can’t get past that this depiction was problematic. I have said before that it’s okay to like something which has problematic elements, but it’s also important to talk about them. So, this is me, talking about what I found problematic.

I liked Dirty very much. It was fun and sexy, funny and sweet. I wish queer folk had been better represented but I enjoyed the read nonetheless. Grade: B+