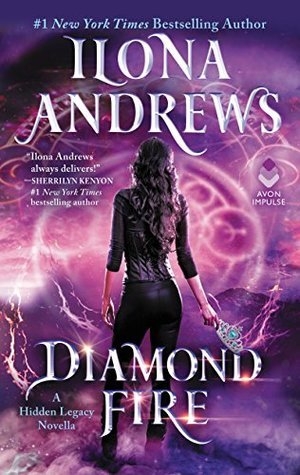 Diamond Fire is book 3.5 in the Hidden Legacy series and it forms a bridge between the first trilogy and the next (trilogy – I think?) which will feature Catalina Baylor as the main POV character. The first three books, Burn for Me, White Hot and Wildfire were all told from Nevada’s perspective.

This novella begins in Nevada’s POV as she and Rogan prepare for their wedding, the first step of which is meeting his mother.

“Mountain Rose. Twenty-two thousand square feet. Ten bedrooms. Twelve bathrooms. Two swimming pools. Tennis court, gardens, the works.” Rogan grimaced. “I once asked my mother why she needed a house that large, and she said, ‘For the grandchildren.’”

“You don’t have any siblings, do you?”

“No.” He moved his hand, indicating the length of the house. “One bedroom for her, one for us—that leaves eight bedrooms’ worth of grandchildren, all on our shoulders.”

“Great.” It wasn’t my shoulders I was worried about, but if I told him that, it would take him another ten minutes to get all of the funny innuendo out of his system.

Shortly after that, Catalina takes over and the rest of the book is from her perspective. Catalina is 18 and has just graduated high school. She’s deciding what to do afterwards – whether that’s college or something else and working for the Baylor Investigative Agency in the meantime. She and her 16 year old sister, Arabella have taken over the role of wedding planners for Nevada as previous candidates have crashed and burned for one reason or another.

When Mrs. Rogan asks for Catalina’s help in locating a tiara that she would like Nevada to wear at the wedding, she adds that investigation to her already full load. In between wrangling wedding guests, Nevada’s desire for flowers in her bouquet which clash with the colour scheme, locating the tiara and trying to keep everyone alive up until and during the wedding, Catalina has a lot on her plate.

She is a Prime – the highest ranked magic user – but the nature of her talent is sealed and confidential. However, readers know that she is a Siren. Her superpower is making people love her. They will do anything for her as a result. There’s a section where she recalls what early childhood was like when everyone wanted a piece of her, how she learned to keep her talent tightly shielded and bound, both for her own safety and also because she did not want to manipulate people. It’s kind of heartbreaking. Although she has a loving family, her power has isolated her and she struggles in relationships because she cannot trust that people are responding to her for her and not because of her magic. During the course of the novella, she begins to wield her magic and develop a new relationship with it. And by the end, she has a plan to take control of her magic rather than the other way around.

I expect Catalina has more to reveal – both to readers and to herself as she matures and studies and I am so here for it. She’s a wonderful character, with a unique view of the world. She’s distinctly different to Nevada, who had the weight of family responsibility on her shoulders as one of her defining characteristics. For Catalina, her journey seems to be a little more inward – in that it’s about how her magic manifests, her complicated feelings about it and her own sense of personhood.

House Baylor has a three year grace period before it’s back to the no-holds-barred political machinations of Houston’s magical Houses. I expect Catalina’s story will pick up again then. I do hope we see more of Alessandro then (he’s not in this book very much in case anyone is wondering). And I wonder if Nevada and Rogan will have filled any of those bedrooms up by then as well.

Diamond Fire is not a romance and it is an intentional bridge between two parts of the series but it is also a complete story and, if you will pardon the pun, a little gem.