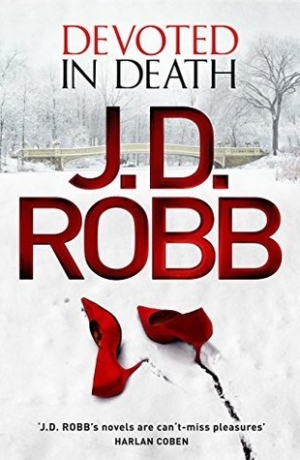 I’m an unabashed fan of the In Death series. This is book 41 and I’m still not sick of it. In the past few years, each book has tended to have one of two possible foci. I call them the more police procedural books or the more “personal” books. They’re all police procedurals of course but some are more focused on Eve and Roarke and their close friends and others put the spotlight on something outside their circle. While I like all of the books, I tend to enjoy the more personal ones the best. So Devoted in Death is a bit of a surprise to me in that it is what I’d call a more procedural book and I was riveted the entire time.  I bought the audiobook and started listening but became impatient (in the evenings I can’t just sit and listen, that’s my reading time) so I went and bought the book (in Australia – as per the pictured cover – there is no hardback release, just a trade paperback and I can get them from KMart for $16 – which, here, is cheap) and switched between reading and listening depending on what else was going on. I knocked the whole thing off in about 36 hours.

The calendar has finally turned to 2061 (progress!) and Eve and Roarke have just got back from a brief tropical island holiday. Her first day back on the job, Eve is called out early in the morning to an alley where a dead body has been dumped. It is apparent the victim has been tortured and killed elsewhere and then transported to the dump site. At first, it appears the crime may have a personal motivation but the focus of the investigation quickly turns to it being a random attack and the killers (there are two) are a romantic pair on a months-long spree of torture and death.

Unlike many of the In Death books (but like every episode ever of Columbo), the reader knows who the guilty parties are from the beginning – in fact, their beginning is told in the opening scene of the novel. So there’s really no mystery to the story.

When another victim, Jayla Campbell, is taken, Eve and her team are in a race against the clock to identify and locate the killers before it’s too late to save her life.  The entire book takes place in less than a week (so there’s plenty of 2061 left for the next 10+ books) and the pace is cracking from the start.

A word of warning for the sensitive and/or squeamish (neither of those are perjoratives by the way): the violence in this book is extreme. These killers abduct and torture their victims over a couple (or more) days and the victims suffer terrible agony. The description of the injuries when Eve and then Morris were doing their examination of the dead body at the beginning of the book was hard to hear. (I find it more challenging to listen to graphic violence than read – I think that’s because I can skim over in print but I can’t on audio. Also the narrator, Susan Ericksen, is excellent so there is extra emotion in the words just from her performance, as well as what I bring to it myself.)  There are some sections from Jayla’s POV and while they don’t go into tremendous detail, there is enough to make it upsetting. The reader, knowing the killers’ MO, knows what it means when Jayla thinks about how they have “hurt” her.  Also, although sexual violence has not previously been a feature, these killers are “evolving” and so I must put in a Trigger Warning for rape. It’s not graphic and it’s not the worst of what they do, but it’s there.

The killers are from Oklahoma and Texas respectively and they are represented as redneck, low-rent and vicious (although the latter has nothing to do with where they’re from). However, Eve gets some help from an Arkansas police deputy and he is represented as very clever, caring and dedicated. Other Oklahoma, Tennessee, Arkansas characters pepper the book. I think, all things considered, it falls out that the locals don’t come out looking all that great; there is definitely some stereotyping going on, but it is not entirely one-sided.  I can’t really comment on how problematic this representation is. I think it might be a big issue to some readers; that’s the best I can do with it.

There isn’t a lot of romance in the story. Eve and Roarke have a fight at one point and make up (which was nice) but Roarke himself isn’t in the story all that much. On the one hand, I appreciated that Roarke doesn’t have to be in on every single thing that goes on and on the other I kind of missed him. Contrary I know.

You always do this thing where you get me to care about characters very quickly. I cared about Dorian Kuper even though it was too late for him as soon as I “met” him. I cared about Jayla Campbell and ached for what she was going through. I had to keep reading (or listening) to find out what happened to her. The suspense of this book is brilliant.  It was tense and urgent almost the whole time because the stakes are so high.

Many of Eve’s friends and colleagues appear in the story and it’s always nice to catch up with them. I thought the (very minor) subplot about Morris was left hanging but I enjoyed Baxter’s angst about Trueheart’s upcoming detective’s exam.

As a page-turning suspense thriller, this book gets an A- from me but as a romantic suspense? It was a little light (well, very light) on the romance so I’m going with a B+.  The violence is heavy going it times but it really is a cracker of a read.