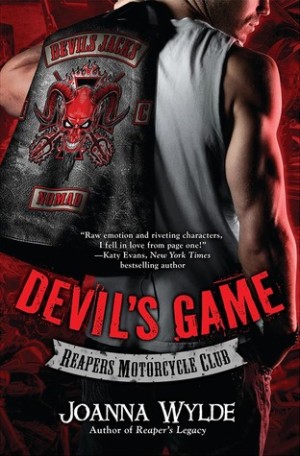 One of the most feminist books I’ve read. This is the line I’ve used to describe Devil’s Game to any number of people who would listen. When the words “motorcycle club” are invoked images of overly misogynistic men telling their property how to act leaps to mind. But within the Reaper’s MC, I believe some of the most interesting power dynamic struggles are taking place.

In Devil’s Game, you have two young people in their early twenties who are struggling with their roles within their respective social groups. One is the daughter of a powerful man and the other is an orphan raised by a dangerous group of men to become a dangerous man himself. Between the two, they have to discover the limits of their willingness to sacrifice part of themselves and part of their vision of the future in order to be together.

I’ve read a ton of MC books and frankly most of them are pretty bad but I believe that the reason it is so popular right now is because of the tribe based culture of the club. Tribes have a long history in literature and romance. The first tribe based romance books I ever read were Scottish Highlander stories. The structure of a Highlander novel is not unlike an MC book.

Both include a militaristic hierarchy with a leader, several strong wingmen, and others that live within the confines of the primary property whether it is hold, fief, or armory. Both types of stories feature warring clans vying for power. Often the head of the tribe is a male with a patriarchal power structure.  The concept of loyalty along with external signage (whether it be plaids–although those came much later in history than depicted in many romances–or cuts) is vital. Scottish stories could (and sometimes did) feature a female clan leader. Medievals often followed the same structure.

After the decline in both those types of stories, we saw a rise in paranormals and in shapeshifters, particularly, you see a similar clan or tribal structure. There is one alpha often male, often involved in power struggles, and all living together for the betterment of the clan or tribe. It was author Moriah Jovan who first pointed out the similarities between werewolf packs and the motorcycle club.

Whenever there is a strong male lead, particularly in these patriarchal clan structures, my preference is for a strong female otherwise the romance seems imbalanced to me. In Devil’s Game, Em is the daughter of Reese “Picnic” Hayes who is the president of the Reaper’s MC–an outlaw one percent club that deals in unstated unsavory activities. Em and her sister were raised within a loving household. They would often see their mother and father lustily touching each other so Em knows what a loving, healthy relationship is. That’s what she wants. Moreover, she wants a man who will stand up to her father because her whole life has been full of men who defer to him.

There was a patch (aspiring member) who became a full fledged part of the club who had feelings for Em, but he never made a move on her without checking with Picnic first. This not only infuriated Em, but made her lose respect for him and she couldn’t be with someone she didn’t respect. Her father scared off all of her suitors and so Em sets out to create her own opportunities. She thinks she’s found someone in an internet connection with Liam Blake. What she doesn’t know is that Liam is “Hunter” and part of the Devil’s Jack MC, a rival of the Reapers, who has decided to take Em because holding her means having leverage against the Reapers. Plus he wants her.

In some ways this is a classic Romeo and Juliet story. Two young adults from rival factions seek to form their own unit yet their families strive to keep them apart. Gratefully this is a romance so we don’t get the tragic ending, but we do get fighting, bullets flying, betrayals and forgiveness.  There are the internal struggles between the two as Em has to learn to trust Hunter and vice versa. There are the external struggles with bringing accord between the rival gangs who are brought together to fight a common enemy. Both conflicts keep the book motoring at a super fast pace.

But it’s an emotional story as well. Em’s a bright young woman and she’s learning, through the book, how to move out of her father’s shadow and become an independent woman. Part of that development includes falling in love with someone who isn’t handpicked by her father and then standing against her father with Liam. The relationship dynamic between Em and Picnic is as important at times as the one between her and Hunter because despite Picnic’s desire to keep Em settled with the “right” man (as approved by Picnic) he raised her to think and act independently. She was level headed and calm in the face of intense stress. As Picnic said, she was one hell of an old lady and he was regretful about losing her to someone outside the Reaper’s because of her capableness.

Throughout the story, Em is saving herself and sometimes Liam. Her power isn’t just the emotional power she’s given because of Liam’s love for her; her power comes from her ability to react calmly in tough situations, to think of solutions, to take action when the opportunity presents itself. She’s proactive in the story rather than reactive.

While Hunter’s intentions in the beginning toward Em weren’t very honorable, he worked hard to earn her trust back. There were three overt acts by Hunter in which he demonstrates his remorse for past misdeeds. Two are fairly humorous but one is a pretty big deal. It occurs at the end and I don’t want to ruin it but there aren’t a lot of times in which the grand gesture means the hero gives up something that reduces the potential for increased status and money. And it doesn’t diminish Liam at all. Instead, it is a showing of someone who is sorting out his priorities and determining what is important to him, what will make him content and happy.

Em and Liam are perfectly matched and within the violent, sexy world of the MC both find equal footing. B+