As a big fan of several of your historical romances, I jumped at the chance to read your first book, recently revised and released as a “sexier, longer” version. I’m a big fan of both “sexier” and “longer” (get your minds out of the gutter, readers, I mean that I like longer books). 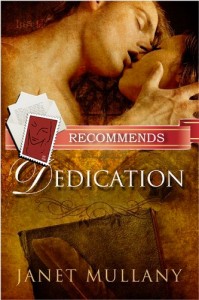 Adam Ashworth and Fabienne Craigmont meet when he storms into the home of his ward Luke one morning, intent on getting to the bottom of rumors that the younger man is keeping a mistress right in his home, something that Just Isn’t Done (especially since Luke is in London supposedly looking for a bride). Fabienne is the companion and patron of the young artist Elaine, who is actually painting Luke in the semi-nude. All very respectable. Well, perhaps not exactly, but not as ruinous, at least, as Adam had feared.

It’s not quite accurate to say that Adam and Fabienne meet in the first chapter. Actually, the two already know each other. Their brief relationship ended some 20 years before; he was a dashing young buck with equal interests in licentiousness and revolution; she was a 17-year-old emigre running with a fast crowd as a consequence of her mother’s gambling habit. Adam is now a widower and a grandfather (!) rusticating in the country and raising pigs. Fabienne has also been widowed (twice) and is now living in London, hosting salons and acting as patroness to various promising artists (not just painters; the young lover Fabienne discards early in the book is composing an opera).

It’s clear from the get-go that Adam and Fabienne are still drawn to each other, but both are wary of getting involved again, for various reasons. Still, when Fabienne realizes that her favorite author, the gothic novelist Mrs. Ravenwood, with whom she’s struck up an increasingly intimate correspondence, lives in a village near Adam’s estate, well, that’s all the excuse she needs to hie off in that direction in pursuit of the mysterious lady.

Fabienne doesn’t find Mrs. Ravenwood (more on that in a moment), but she does meet Adam’s widowed daughter Barbara, a very young mother of two, who takes to Fabienne immediately and invites her to stay at their manor. Fabienne quickly becomes further enmeshed in the lives of Adam and Barbara; it turns out that the sleazy military officer she met at one of her salons (and took an instant dislike to) is Barbara’s estranged, abusive husband. Apparently Barbara married him at 15, already pregnant with his child. Adam, rather understandably, doesn’t care for Captain George Sanders and has put it out that Barbara was widowed. Sanders promptly shows up and takes Barbara and his children away, causing Adam anguish, all the more so because he and Barbara quarrel before she leaves.

What the reader knows early on, and Adam thinks Fabienne knows (but she doesn’t) is that he is Mrs. Ravenwood. His writing came out of stories that he told his wife to entertain her as she lay dying, and now he works rather compulsively, though he’s somewhat ashamed of writing “non-serious” books for a mostly female audience. He is fearful of being uncovered by Fabienne and demands that she return the letters “Mrs. Ravenwood” wrote her. Fabienne thinks that Mrs. Ravenwood is Adam’s mistress (not really a notion that holds up well under close scrutiny, IMO), and mostly out of sheer perversity she refuses to return them.

The device of Fabienne pouring out her feelings to “Mrs. Ravenwood” via letters probably doesn’t bear close scrutiny, either. Never mind the unlikelihood of a 19th century woman, even a relatively free-spirited one as Fabienne is, referencing masturbation, among other taboo topics, in her writings to a total stranger. But the device does allow for some amusing and intriguing moments early on as Fabienne wonders at her intense attraction to this unknown woman. Also, it creates tension between Adam and Fabienne, thought that scarcely seemed necessary, given that they continually find things to squabble about throughout the course of the book.

I am guessing that some readers will be drawn to this book because of the older protagonists – more mature heroes and heroines are something I’ve seen readers agitate for over the years. I’m not necessarily one of those readers. Oh, I don’t want all of my heroines to be fresh out of the schoolroom (and I’m even iffier on very young heroes, because it’s hard for me not to picture them as callow), but I have some mild issues with older couples in romance. There’s often a touch of melancholy in such romances – perhaps even moreso in reunited lovers stories. After all, if it weren’t for this misunderstanding or that silly fight, the couple would’ve enjoyed so many more happy years together! Such romances feel bittersweet to me, and not in a good way; they have just a touch too much of the bitter to be entirely satisfying.

As it turns out, I didn’t have this issue nearly as much with Dedication as I sometimes do. This is partly because Adam and Fabienne have had positive and loving relationships in the interim, relationships that they would’ve missed out on if they had never broken with each other.  Adam in particular really came to love his wife Mags, much to his surprise. He loves the children he had with her and the grandchildren that came later. He has a whole life that he would not (if I may speak for a fictional character that I myself did not create) want wiped out, even were it possible. There’s still a touch of bittersweetness there – after all, Adam and Fabienne have not just loved, but loved and lost. But I got a clear sense that these were not really “lost” years, because both characters had joy and grew and generally lived full lives.

The relationship between Fabienne and Adam through the middle part of the book was inconsistent in a way that was either unrealistic or extra-realistic (I can’t quite decide). I lean towards the latter but it bugged me a bit anyway. Adam and Fabienne encounter each other over and over and get locked into an advance-retreat dynamic (with Fabienne usually being the sexual aggressor, which was an entertaining turnaround). He loves her. She hates him. He wants her, but wait, no, they mustn’t. She’s humiliated, or amused, or she storms off. He wants his letters, and she won’t give them up. S/he is angry about events that took place two decades previously. Each of them perform dizzying turnarounds, often in the same scene. I understand that there needs to be some conflict between them to keep the story going, but I could’ve done with with it being a bit less madcap.

One thing I really liked about Dedication was that the passage of time had changed Adam and Fabienne so utterly – to some degree, they switched roles. Adam started as a young, hotheaded romantic type, both a seducer of women and and someone with revolutionary tendencies. Fabienne was innocent, convent-raised and new to England, having fled the French Revolution with her mother (her aristocratic father’s revolutionary sympathies did not save him from the guillotine). She fell for Adam, knowing on one hand that he was just trying to seduce her and wouldn’t really marry her, but allowing hormones and puppy love to overcome caution. Their romance ended disastrously, sabotaged by outside forces with their own sinister motivations (a rather melodramatic element in what was otherwise a believable young romance). The mature Adam is chaste in his habits and a bit stuffily disapproving of behavior outside the realm of propriety – something that causes problems in his relationships with both Fabienne and his daughter Barbara. Fabienne, on the other hand, has become very worldly and urbane, hosting salons and taking lovers (discreetly, of course) with impunity. I really enjoyed the role reversal, especially when so often in reunion romances the heroine has lived in a state of suspended sexual animation, waiting for the hero to come back and turn her on, so to speak.

I found the late revelation that the villain was villainous out of thwarted homosexual longing unnecessary and a bit distasteful. I’ve just seen too many romances that fall back on that tired canard and it ends up feeling homophobic. I certainly don’t think that was the intent here, but given how overused this trope is, I could’ve done without it.

Overall, I wouldn’t rank Dedication with my favorite Mullany novels – it lacked a bit of the sparkle of those books (and I missed the first person narration!). But it was a solid romance, well-written and featuring unique characters. My grade: B+.