REVIEW: Days of Blood and Starlight by Laini Taylor

Your previous novel, Daughter of Smoke and Bone, was my favorite read of 2011. In it, readers met Karou, a blue-haired art student from Prague who also happened to be the human adopted daughter of monsters. The unfolding of Karou’s story, her history with the chimera, and her connection to the global angel sightings enthralled me. So I’ve been anxiously waiting for the sequel. It did not disappoint.

Once upon a time, an angel and a devil fell in love and dared to imagine a new way of living — one without massacres and torn throats and bonfires of the fallen, without revenants or bastard armies or children ripped from their mothers’ arms to take their turn in the killing and dying.

Once, the lovers lay entwined in the moon’s secret temple and dreamed of a world that was like a jewel box without a jewel — a paradise waiting for them to find it and fill it with their happiness.

This was not that world. 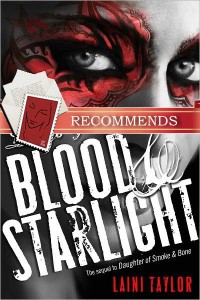 Days of Blood and Starlight picks up after the events of Daughter of Smoke and Bone. Karou has vanished without a trace. The media is in a frenzy over the angel sightings and the mysterious blue-haired girl on the bridge. Some people, like Karou’s ex, have capitalized on the interest. Others, like Karou’s best friend, Zuzana, are worried. In fact, Zuzuna fears the worst has come to pass and that Karou is dead.

But Karou is indeed alive and well, and despite the narrative suspense over her absence, I would claim this not to be a spoiler since it wouldn’t be much of a trilogy had Karou died off-page. Talk about reader disatisfaction had that been the case! Without giving too much away about what Karou has been up to since her disappearance, let’s just say she’s joined the ancient conflict between angel and chimera. She may be human but she now has her memories of her previous life as the chimera, Madrigal, and as a result, is able to contribute to the battle.

Meanwhile, Akiva is wracked with guilt over the wrong he committed against Karou. From the angels’ perspective, what he did was right. In a single act, he destroyed the enemy’s source of power. After all, an army of souls who never truly die is a formidable opponent. But in doing so, he destroyed Karou’s life and realized too late that without that source of power, he would never have been reunited with his beloved Madrigal, now housed in the body of a human named Karou.

As a result, he tries to atone for his deeds. He remembers the dream he once shared with Madrigal, before grief clouded his thoughts with rage. He realizes once again that in this neverending cycle of war and bloodshed, there are no winners. There is only blood. So he begins to rebel in small, subtle ways.

After Daughter of Smoke and Bone, I wasn’t sure which direction we’d take. The revelation of what Akiva did was devastating and I admit I was a little worried we’d gloss over that fact as Karou and Akiva’s relationship progressed. I’m glad that didn’t happen. Karou does not forgive him for it and in fact, this drives her to make the choice she does. Her griefstricken anger is a palpable thing. I’m not sure I’ll ever be a fan of the Karou and Akiva relationship — I admit I find their dynamic boring — but I think this novel went a long way to assuaging my concerns in the way the problems and conflict between them are presented and explored.

I love that Zuzana played a significant supporting role here. As always, I’m a huge fan of female friendship especially when the friend has a life that doesn’t revolve around the heroine. Zuzana is worried about Karou and searches the globe for her, but her identity doesn’t revolve around Karou. She has a love interest of her own. She has interests, skills, and a personality that aren’t reflections of Karou’s. These sound like basic things but read enough YA novels and you realize that nope, not really.

As I mentioned before, I’m not really the biggest fan of Akiva. I get why his character is appealing but he doesn’t do anything for me. That said, I did appreciate that this novel delved more into his background, both on an individual character level and within the context of the angelic society. It makes me curious to see how it’ll be further explored in the next (and final?) book.

What struck me strongest about this novel were its themes of atonement and penance. Once upon a time, Akiva and Madrigal dreamed of a better world. Unfortunately, their love was forbidden and the punishment for it only escalated the war. And now their dream has gone so horribly awry that it’s uncertain they can come back from it. Days of Blood and Starlight does not shy away from that fact. There’s so much mistrust on all sides. Even Karou, who has rejoined the chimera side and begun to aid them, is the subject of much suspicion. No one has forgotten what her previous incarnation did, or rather who she fell in love with. But Karou endures their treatment in memory of her family, perhaps beyond the point at which she should have begun to push back. Even when the angels and chimera reluctantly team up, it’s not because of any ideas of peace. It’s because they have a common enemy. It’s a grim reality but I also think it is an honest one.

I thought Days of Blood and Starlight was an excellent follow-up to Daughter of Smoke and Bone. In some ways, I think it’s a stronger book. If Daughter was about Karou learning who and what she was, Days portrays the repercussions of choices and how devastating those effects can be. While the book doesn’t quite end on a cliffhanger, I am once again anxiously waiting the next novel. B+