REVIEW: Daughter of Smoke and Bone by Laini Taylor

Your novels have been on my peripheral awareness for a couple years now. I keep meaning to give them a try, but you know how it is. So many books, so little time. Then I heard the buzz surrounding Daughter of Smoke and Bone. I thought it was a great title so ever curious, I looked it up on Amazon. I read the book description but it seemed kind of vague to me. I can’t say that without the interesting title to spur me on I would have picked up this book. The cover copy was so uninformative. While not inaccurate, I don’t think it does the book justice. 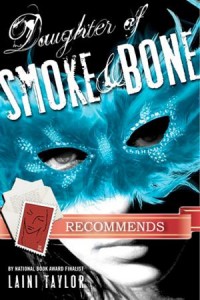 Karou is an art student in Prague known for her magnificent, fantastical sketchbooks. But what people don’t realize is that the monsters populating her drawings actually exist. The reason why Karou doesn’t appear to have a family except for a never-seen grandmother is because she doesn’t actually have one. At least not a human family. Karou was raised by chimaerae, what most people would call demons.

But now something has come that threatens her world: seraphs (aka angels). First, they leave scorched handprints on the doorway portals that link our world with that of the other realm inhabited by Karou’s chimaerae family. Then Karou comes face to face with a seraph intent on killing her. Except the seraph, Akiva, doesn’t and even though they are enemies, Karou finds herself inexplicably drawn to him. And as they get to know each other, she finally learns the answer to the mystery of her heritage.

Put like that, Daughter of Smoke and Bone sounds like every other YA paranormal out there on the market right now. But it’s the execution and details that set this novel apart. Having finished the book, I now understand why the book description was so vague and bland. It’s hard to encapsulate this novel without dropping spoiler bombs left and right. So much of the tension depends on the mystery and how Karou reacts to the bits and pieces of information she discovers.

The biggest strength of this novel, for me, was the worldbuilding. It was presented with verve and very little time was spent explaining each and every rule. It wasn’t necessary and in fact, would have been unbelievable. Karou grew up in this fantastical world. Running distasteful errands for a demonic tooth fairy and walking through doors to another world was everyday and mundane to her. It would make no sense for her to talk about how the chimaerae were monsters. They were her family and she loved them just as much as they loved her.

But as I mentioned before, it is a very fantastical world. It features demons and angels waging a neverending war. There’s a magic system that extracts a horrible price. For readers who believe that magic should always have a cost, this system is for you. It’s simultaneously gruesome and elegant. There’s an otherworldly dimension populated by these demons and angels which can only be accessed from ours by a system of doorways. It’s an interesting approach more akin to Neil Gaiman and Charles de Lint than the more popular paranormals that fill the current YA genre.

I also enjoyed the approach to the romance. In so many YA paranormals, we have the girl and guy meet and they’re instantly attracted even though they come from two different worlds. We get a different take on that here. Sure, it proceeds as we’ve seen so often before: they fight because they’re enemies and they can’t kill each other due to some inexplicable attraction. But where Daughter of Smoke and Bone diverges is that it deals with what happens after the girl discovers her world has been altered. I can’t go into too much detail without spoiling but this novel definitely shows that sometimes love is not enough and that some things cannot be easily forgiven.

Tangentially related to the romantic subplot, I thought the novel excelled at showing how love can change your entire world — for good and for bad. We saw how love could have changed the path of the chimaerae and seraph war but it failed. Then later, the survivor of that great love, Akiva, went on to do a horrible, terrible thing that essentially destroyed Karou’s life.

I thought Daughter of Smoke and Bone straddled the line between the familiar tropes and conventions of current YA paranormals and the more otherworldly approaches of the traditionally executed contemporary fantasy genre. What made it stand out for me was the execution of the coming of age story. It is the start of a series (trilogy?) so readers should be aware it ends on a heartwrenching note. I wouldn’t call it cliffhanger myself, but I can see how it’d be viewed that way. B+