With the exception of The Lion of Kent, which I enjoyed reading last year but which didn’t stick in my mind, I haven’t read your work (even though I’ve heard many good things about it). Your choice of settings and characters aren’t the type I usually seek out, but when I saw that you were publishing a series of contemporary short stories I was intrigued. I don’t generally read genre fiction with criminals as the protagonists, but something in the blurbs resonated with me, and the word-of-mouth and reviews have been stellar. So I bit the bullet and downloaded Dark Soul Vol. 1. And wow, am I glad I did. 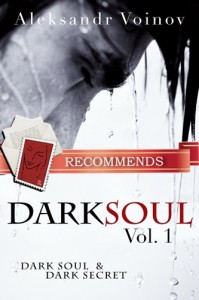 The Dark Soul series comprises several short stories, bundled in pairs. They revolve around Stefano Marino, a “made man” (an official member of the Mafia) and Silvio Spadano, the protege, heir and assassin of a retired Mafia executive, Gianbattista Falchi. They meet for the first time in the first story, “Dark Soul,” when Mafia members from Europe and North America are summoned to the home of a powerful, dying Mafioso. Stefano is technically higher in rank but Silvio, as Falchi’s representative and favorite, is treated with greater deference. Stefano is happily married and considers himself straight, but he is immediately attracted to Silvio. When Silvio sneaks into Stefano’s room at night (we don’t find out why) and immobilizes Stefano’s bodyguard, Vince, Stefano turns the tables, ties Silvio up and humiliates him in a way that arouses them both.

The second story, “Dark Secrets,” takes place at Gianbattista Falchi’s Tuscan estate, where Stefano has come to ask Falchi for help with his business, and it explores the relationship between Silvio and his much older boss, who are clearly involved both sexually and emotionally. Stefano continues to be attracted to Silvio and it’s evident the attraction is returned, but Stefano is both resistant and puzzled: resistant because the Mafia is intolerant of homosexuality and he fears for his position and his business, and puzzled because he is genuinely in love with and sexually attracted to his wife, Donata. Through Stefano’s POV, the story gives us insight into the complex and intense nature of Silvio and Falchi’s relationship, a relationship which takes a surprising turn at the end of the story and sets up the second volume of the series.

These stories are not romances; there is no HEA or even HFN at the end of Volume 1, and the reader is left hanging plotwise. If you like cliffhangers it’s a great one, but if you don’t and you like the sound of the first volume, you should go into it prepared to download the next one when you’re done. The stories are also somewhat unusual in their construction. They follow a standard chronological narrative, but there are all kinds of unresolved story and character threads.

For example, we never find out what happens to the dying Mafia Don in the first story. The second story picks up some time after the first, but we don’t know what happens in the interim. Is Vince going to be an important character throughout the series?

The stories have this amazing texture and density, but we only get partial views of basic aspects like plot, motivations, etc. It’s both frustrating and compelling. I had to read the first few pages several times to get my bearings, because I felt thrown in at the deep end. But I kept reading anyway, because the writing was powerful and the characters were irresistible. The writing has a hypermasculine feel to it, which seems appopriate to the hypermasculine environment; it’s not particularly spare, but it’s direct and almost in-your-face:

Spadaro studied him, head tilted. “That’s why I don’t belong to anybody,” he said quietly, but with the force and conviction of a kidney punch. “I’m not following their fucking rules.” He swept the crowd again with his expressionless black eyes, then fixed them on Stefano’s face.

Stefano’s lips tingled. It was still hard to breathe and he had no idea why. He couldn’t let this man intimidate him. Couldn’t be seen as too interested. Barracuda or not—even Gianbattista Falchi’s protetto or not—he could afford zero suspicion. He’d be dead. Fuck Spadaro for flustering him so, and fuck himself for getting flustered, but he’d never show it. “Well, give Falchi my best wishes when you return to him.”

“Will do.” Spadaro sketched an ironic salute and stepped away.

Stefano fought the urge to straighten his tie, fought harder against the urge to watch the Barracuda cut through the assembled groups of men.

He caught Vince’s gaze, and though his bodyguard relaxed a little, he still looked worried. Stefano could see why. A sicario who belonged to a “retired” consigliere, and not just any pensioner, but crafty old Gianbattista Falchi, who’d been more powerful in his own right than many bosses. That was all manner of disturbing. “Paying his respects” by being anything but respectful.

The relationship that develops between the two men is at times brutal (literally so in the first story). And yet, by the end of the second story, I was convinced that more tender feelings could flourish between them as well. Silvio thrives on the combination of pain and pleasure, and Stefano instinctively responds:

What would it be like to have a lover like that? Somebody he could do this to, mix the pleasure with pain. Someone who would take it all and more and never consider him a controlling freak.

Although Silvio masks his vulnerable side and his softer emotional needs, by the end of the second story they have been revealed, both to the reader and to Stefano. I very much look forward to seeing how you concurrently explore the relationships and the criminal storyline.

I want to reiterate that this series is not genre romance, nor does it conform to the usual m/m conventions. The protagonists have sex with other people in these stories. The main characters are all part of the criminal underworld, which some readers will find objectionable. So far the sex scenes are anything but vanilla (one involves non-consensual acts). I really appreciate that Stefano’s wife is not portrayed as emotionally incomplete, a shrew, or a ditz, but I can’t imagine things are going to go well for her marriage in the subsequent installments.

I should also note that the book is $3.99 for about 20,000 words (or about 60-70 pdf pages). That is not cheap, and frankly, the price kept me from picking it up a while ago. But I kept thinking about it, and for me the quality is worth the price.

With all these caveats stipulated, I definitely recommend this series. If readers are looking for excellent writing, strong characterizations, sizzling sex, and a fascinating storyline, you won’t want to miss Dark Soul Vol. 1. I’m off to download Volumes 2 and 3.