REVIEW: Daring In a Blue Dress by Katie MacAlister 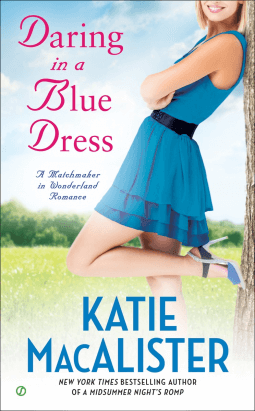 Stranded in England without money or a ticket home, Mercy Starling takes a job working for a medieval reenactment company. After all, who wouldn’t want to pretend to live in the past, wield swords and long bows, and dress up in armor? And the best part of her summer job is Bestwood Hall…or rather, its intriguing new owner.

The painfully shy Alden Ainslie is overwhelmed by the medieval reenactors who invade the Tudor house he’s renovating, but he’s drawn to the bubbly Mercy. And he valiantly joins in the fun, dodging not just arrows, lances, and the odd sword thrust, but also some pretty suspicious—and potentially deadly—attacks on himself. Someone wants him to give up on the house. But Alden is desperate to prove himself—and win the heart of his lady fair…

The blurb sounded like fun, I don’t think I’d ever read a MacAlister book before (I know, I know) and I adore the idea of a heroine with tons of self confidence who falls for and brings a shy, geeky hero out of his shell and into furry handcuffs. What’s not to love?

Well, the opening bit about Alden’s massive family (10 adopted children – oh my, stories for all?) pulled me up short. Are all of them going to be crammed into this book? Also the eldest and next eldest brothers are – maybe not goo-goo in love with their new wives but still in the mushy newlywed stage. Alden is shy and trying to fend off his sister-in-law’s matchmaking attempts. Is that going to be annoying? Thankfully, her husband agrees with Alden that Alice isn’t great at it and is okay with Alden not dating her fix-up. Alden quickly leaves the family castle heading off alone and I heave a sigh of relief and keep reading.

Alden’s sections are 3rd person past tense while Mercy’s are first person. I’m never quite sure why stuff like this is done but thought I’d mention it. The transitions are easy and not jarring. But even after a few secrets are revealed at the end, I’m still not sure of the why.

The set-up is only slightly kooky and makes a lot more sense than some convoluted plots or meet-cutes I’ve encountered in romance books. Alden and Mercy arrive at Bestwood Hall at the same time and while Mercy thinks it’s great as is, Alden’s plans include fixing and flipping it. Only, as he tells his brother, the house is in such sad shape that were it a person, it would be “clothed in black, drinking absinthe and writing depressing poetry…” But it looks like between the two of them, Mercy and Alden’s love of learning and multiple college classes taken will stand them in good stead for all the issues – including bats in his chimney – which face him. Only Alden never does ask Mercy about helping the stunned bat that fell into his room. Oh well ….

There are slight lapses with slang – ass instead of arse for Alden but nothing too, too bad. Alden has a lovely habit of writing notes to Mercy. She likes it and I think it’s romantic too. Several scenes of physical proximity ensue due to murine influence. Mercy’s really got it bad against little Murinae.

What will Lady Sybilla’s “valuable” papers reveal? And is there anything that she’s up to? It’s hard to tell when she goes all Lady of the Manor whenever anyone questions her about anything. Is Barry Butcher and his Hairy tits – not a real species apparently – for real? Now Big tits … they exist but not hairy ones. Or hairy ones that fly and tweet. Hmm, what is the deal here, both Alden and I wish to know. And what about all those tunnels under the house on the Cornish coast?

What fun sex we have here! First Mercy helps (thanks to her classes in psychology) shy Alden desensitize about being around a woman he fancies. This is followed by the communication of wants and dislikes. And then lots of fun. Mercy is a woman in charge of her sexuality. Let me quote a passage.

I pushed him backward until he was lying on the bed with his feet on the floor, then straddled his lap, leaning forward to prop myself up on my elbows. My breasts were exactly at his mouth level. “A girl can only stand so much of manly- stubble- flaunting. Kiss me.”

He kissed the exposed part of my breasts. “I am happy to oblige, although I regret my stubble has taunted you to the point where you can’t stand it any longer. What can I do to show the depths of my regret?”

“I think some intense, jungle- hot, slightly sweaty sex is in order.” …..”All of a sudden, you being right here next to me, smelling so good, and being warm and solid and raspy- faced, was just too much. I hope you are as ready as I am. . . . Oh, nice, you are.”

Poor Alden really does need to get over his belief that his house is trying to commit suicide and that it hates him. As Mercy says, it should like him since he’s trying to get rid of its rot and mold and nail it back together. Still the sheer number of events and times that roof tiles have slithered off to almost brain Alden is suspicious. But hark, there could be an explanation which Alden and Mercy, or Ned and Nancy as they jokingly refer to themselves, will discover as they set off to solve the mystery they find. Only things keep getting weirder and weirder and dangerouser and dangerouser. At least for Alden – poor boy. Accusations start flying about, um, certain incidents while Alden and Mercy, at least when she’s not mad at him, try to puzzle out what’s going on and who’s behind it and why. The cast of possible suspects is large but the reason behind the overall mystery is, well, a mystery.

Or maybe it isn’t. A few clues have been dropped and doubts sprinkled about certain characters which all come together in a rousing medieval melee without, thank God, villain exposition. What we do (hysterically) get is a verbally conveyed blow by blow account of the melee, the aftermath and Alden and Mercy’s discussion about their relationship status – all to the chorus of cheers or boos from the peanut gallery listening in. Yay!

Two major thumbs up for the story not being overloaded with past and future series characters. Well, except for the end when all the pieces got fitted together and the protagonists expositioned but not for too long. This is a funny, flirty, sexy – but a fun sexy and not overly mental lusting drooly sexy – story. There are a few teensy issues such as why Lady Sybilla’s deceased husband stopped his money making venture and why did Alden not call on his family for renovation help (honestly, I don’t think I would have minded) but this book is just so much fun I didn’t care. Huzzah! B+