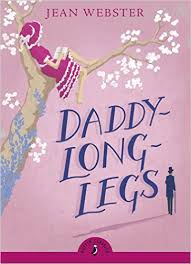 I had just finished my most recent classic* read and was casting about for another. A friend suggested Daddy-Long-Legs, with which I was vaguely familiar from the film version, though I’ve never seen it (I’m referring to the Leslie Caron musical one; apparently there are several film versions – I don’t think the Caron one is a particularly faithful adaption).

* I used to define a “classic” as Well-Known, Improving and Literary fiction, but have gotten looser and now it’s pretty much anything that I can get via public domain and that I’ve heard of before (or at least heard of the author).

My friend mentioned that Daddy-Long-Legs is an epistolary novel, and well, I love a good epistolary novel. So even though I’d just finished a short, light, comic classic (Three Men in a Boat) I decided to give another one a try rather than attempt a Big, Serious 19th century novel.

The story opens with Jerusha Abbott, lifelong orphan and current drudge at the John Grier Home, the orphanage at which she was raised. Jerusha is 18 when she’s summoned by Mrs. Lippett, the orphanage’s director, and informed that one of the trustees, known only to Jerusha by the alias “John Smith”, has decided to send her to college. Smith, who apparently has sent several male inmates of the orphanage to school already, heard an essay that Jerusha wrote and decided to sponsor her on the basis of her writing (Jerusha aspires to be an author). As per Mrs. Lippett, one of Smith’s requirements is that Jerusha write him regularly, care of his secretary, to report on her progress:

‘His reason in requiring the letters is that he thinks nothing so fosters facility in literary expression as letter-writing. Since you have no family with whom to correspond, he desires you to write in this way; also, he wishes to keep track of your progress. He will never answer your letters, nor in the slightest particular take any notice of them. He detests letter-writing and does not wish you to become a burden. If any point should ever arise where an answer would seem to be imperative–such as in the event of your being expelled, which I trust will not occur–you may correspond with Mr. Griggs, his secretary. These monthly letters are absolutely obligatory on your part; they are the only payment that Mr. Smith requires, so you must be as punctilious in sending them as though it were a bill that you were paying. I hope that they will always be respectful in tone and will reflect credit on your training. You must remember that you are writing to a Trustee of the John Grier Home.’

Jerusha is delighted at this unexpected opportunity, and she writes Smith almost immediately upon her arrival at college. Because she caught a fleeting glimpse of him as he left the orphanage, and because his shadow on the wall revealed him to be unusually tall and thin, Jerusha rechristens him “Daddy-Long-Legs” and addresses him as such in her letters. From the beginning her irreverence and playfulness challenge the boundaries he’s set on their relationship, even as their correspondence remains decidedly one-sided (his secretary apparently sometimes replies to her with responses to requests, etc., but we never see those letters).

Jerusha rechristens herself as well – as Judy:

I wish Mrs. Lippett would use a little more ingenuity about choosing babies’ names. She gets the last names out of the telephone book–you’ll find Abbott on the first page–and she picks the Christian names up anywhere; she got Jerusha from a tombstone. I’ve always hated it; but I rather like Judy. It’s such a silly name. It belongs to the kind of girl I’m not–a sweet little blue-eyed thing, petted and spoiled by all the family, who romps her way through life without any cares. Wouldn’t it be nice to be like that? Whatever faults I may have, no one can ever accuse me of having been spoiled by my family! But it’s great fun to pretend I’ve been. In the future please always address me as Judy.

Judy’s letters are light, funny and conversational in tone; she does sprinkle information about her academic progress throughout but otherwise her letters often read like diary entries, reflecting her thoughts (and insecurities) about her change in station and about the people around her. She makes a friend in fellow freshman Sallie McBride and a frenemy (well, not quite, but Judy is wary of her) of the snooty Julia Rutledge Pendleton.

Judy is a great heroine – cheerful but not sickly sweet; she retains a certain amount of resentment towards her status as a foundling in general and the John Grier Home in particular. But she’s grateful for her opportunity and appreciates the little things that others around her take for granted (having several dresses and three pairs of kid gloves, for instance). She’s clearly very bright and observant but also seems young for her age (even given the era) and understandably unworldly. This contributes to the only problem I had with Daddy-Long-Legs; it’s kind of a big problem, though.

Judy’s benefactor is much richer than her, older than her (though not as much older as she assumes) and obviously has a lot of power over her. She’s beholden to him and required to a certain degree to obey his commands. Contributing to the imbalance greatly (and further squickifying the squicky part) is the nickname she gives him, which she generally shortens to “Daddy” in her correspondence.

It’s not too much of a spoiler, I hope, to reveal that there’s a romance in Daddy-Long-Legs, and well, you can guess who Judy is eventually paired with. This left me *so* conflicted – I loved Judy and the writing was charming and I understand that this was written in a different era (though Judy’s own proto-feminism throws the inequalities of the relationship into even starker relief). It certainly doesn’t help that at points in the story “Daddy” manipulates Judy or outright refuses to allow her freedoms, seemingly with the goal of keeping her away from other men.

Judy does make modest attempts along the way to gain independence from her benefactor. For instance, she applies for an is granted a scholarship, though he tries to keep her from accepting it. I thought her attempts to assert herself were admirable, but at the same time they made me dislike Smith ever more, which became a problem as the book drew to a close.

Webster was a charming writer and I was interested to learn a bit about her history (from Wikipedia, natch) – she apparently died in childbirth in her late 30s, cutting short what could have been a long and rich career. As I said, she gives Judy feminist tendencies:

Don’t you think I’d make an admirable voter if I had my rights? I was twenty-one last week. This is an awfully wasteful country to throw away such an honest, educated, conscientious, intelligent citizen as I would be.

…and even speaks a bit on socialism and anarchy, as when Judy writes, tongue-in-cheek:

That’s a Socialist who’s willing to wait. We don’t want the social revolution to come tomorrow morning; it would be too upsetting. We want it to come very gradually in the distant future, when we shall all be prepared and able to sustain the shock.

In the meantime, we must be getting ready, by instituting industrial, educational and orphan asylum reforms.

Yours, with fraternal love,
Judy

The revelation about the identity of Daddy-Long-Legs, coming very late in the book, ends up pivoting the story towards romance. Besides feeling that Judy was manipulated and controlled to a degree that made me uncomfortable, the idea that she would settle down to an HEA seemed at odds with her somewhat radical leanings. I was left feeling that Judy had to make a choice about which path to take, an she ended up taking the far more traditional, less challenging one. That made me a bit sad.

I think ultimately I would have enjoyed Daddy-Long-Legs more if it had ended with Judy running away to Europe to be a writer and leaving her suitor in the dust. As a romance it did not work for me at all but as a coming-of-age Young Adult novel it was delightful, and I will give it a B+.