Back when I was devouring your backlist, in my early days as a romance reader, I avoided Crooked Hearts at first. I had very rigid notions of what I liked and what I didn’t like, and “Western” and “humorous” were on my “do not like” list, as far as romance went. I was pretty stubborn in those days; it took me a long time to realize that I valued good writing far, far more than setting or angst level. Anyway, as it turned out, Crooked Hearts is not exactly a Western, and while it is funny, it also has its fair share of depth and emotion. 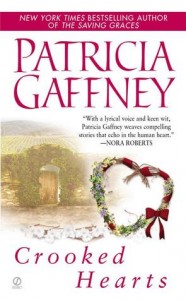 The novel’s opening line, “Sister Mary Augustine’s little silver derringer was cutting into her thigh” is semi-famous in romance circles, one of those great opening lines that gets traded among romance fans. It’s a great, evocative line, and it also foreshadows the complexity of the heroine and her contradictions. Grace Rousselot meets Reuben Jones on the stagecoach to San Francisco; she is impersonating a nun and he the heir to a wealthy ranchero, recently and tragically blinded in an accident. They are both con artists, of course, though at first neither of them knows about the other. Reuben figures out that Grace isn’t a nun quickly; he’s able to observe her, after all, when she thinks she’s not being watched and indulges in un-nunlike activities, like trying to adjust the position of the uncomfortable gun. It takes Grace a few chapters to figure out that Reuben is not what he seems, and by then both are fleeing a stagecoach robbery (they aren’t the perpetrators, but both have a healthy aversion to the law, and so figure it’s better to get out while the getting’s good).

Reuben and Grace travel to San Francisco, where Reuben allows Grace to stay with him in his ramshackle house while she figures out what to do next. She tells Reuben she needs money for her “husband” Henry’s heart operation, but of course Reuben isn’t falling for that. Grace does need money, and so does Reuben (to pay off a gang of brothers he’d previously fleeced), so they decide to pull a con – in the form of a crooked card game – together.

Reuben and Grace are enormously appealing characters, both together and as individuals. Reuben has an interesting, unusual background that he doesn’t reveal to Grace until late in the book. Both of them, in fact, play it pretty close to the vest for the better part of the story, blithely lying to the other whenever the situation seems to require it. This might be off-putting but for the fact that both of them know the score and neither is quick to fall for improbable (or even probable) stories. Grace is slightly more conventional than Reuben; at one point he notes that she’s a “combination of bunco artist and bleeding heart”, and that’s in fact a pretty apt description. I might have wished for her to be a little tougher – I’m always looking for signs that a heroine is being softened to make her more typically “feminine” – but in the end Grace’s personality felt authentic, contradictions and all. And in fact Reuben, though he may be a bit savvier than Grace, really isn’t all that tough either.

When a small Chinese statue that Grace lifted during the stagecoach robbery (part of a collection of antiquities another passenger was transporting) ends up being very important to a local Chinese businessman, Reuben and Grace think that they may be set up for the score of a lifetime. But they are wading into deeper waters than they are used to, taking on both a dangerous man and an unfamiliar subculture (San Francisco’s Chinatown).

There were a couple of things that made this mostly fun and light book a little bit uncomfortable for me as a reader.

First, I was always on the verge of having an ethical problem with Reuben and Grace’s profession. Yes, confidence artists tend to prey on peoples’ greed and vanity, and that makes their victims less sympathetic. In their crooked poker game, the main victim was pretty unpleasant, and Reuben shows some concern for the less odious players (i.e. he is glad when they fold; he doesn’t want them to lose all their money). However unrealistic this might be (I’m thinking real-life con artists have to be a wee bit more callous), as a reader I appreciated it. There’s a fine line between making the hero and heroine madcap sort-of-Robin-Hoods who steal from the unworthy and give to…themselves, and making them leeches who exploit the trust of others. While Reuben and Grace mostly stayed on the former side, I was often a bit uneasy.

The other issue that gave me some discomfort is a touchier one. The depiction of the Chinese characters in the book is…not exactly nuanced. On the one hand, I find this less of a concern in a book that isn’t hugely serious – the portrayals are not offensive, just a bit stereotypical (e.g. Grace’s inscrutable houseboy, and the Chinatown gangster who longs to be white and lusts after white women). I find it a little surprising that the book is only about a decade old, though, because it feels to me like such characters might raise some eyebrows if the book were newly published today.

I’ve emphasized that Crooked Hearts is light, but it does have some emotional heft; both Reuben and particularly Grace had troubled upbringings and have suffered losses. Reuben’s ethnic background – he’s a Jew born in the Ukraine – adds some color (and some entertaining Yiddishisms).

Crooked Hearts isn’t my favorite of the Gaffney reissues, but like anything by this author, it’s well worth reading, especially if you like your heroes and heroines unconventional. My grade is a B+.