Right before I received your book for review, a friend of mine told me she had a “meet cute” on a train. She ran into a guy who dropped a tux he was carrying. She later found out he was the best man and the tux was for the wedding. I joked about how this could have been a Harlequin Presents but that no millionaires would ever be caught riding the train. We then traded emails including different scenarios about how a millionaire would find himself on his train. A week later, I had to email her and say that there actually is a Harlequin Presents with a meet cute on a train. Harlequin Presents is like Hallmark, a book for every occassion. 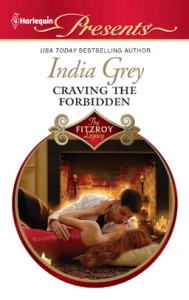 Sophie Greenham is an unknown actress used to playing minor roles. She has no aspirations of anything greater. Her best friend, Jasper, is the son of the Earl of Hawksworth and he has not come out to his father. He begs her to come to his family home where they are going to celebrate his father’s seventieth birthday and pretend to be his girlfriend. Sophie readily agrees and from what she has learned from Jasper about his family, she is happy to go and protect him.

To get to the family home, Sophie takes a train and stumbling around tired and without the funds, she makes her way into first class. She knows she shouldn’t be there, but it is the only place with an open seat and she is exhausted. Unfortunately just as she is taking her seat, her phone rings and it is her recently disposed of ex, Jean-Claude whose voice rings out loud enough for her and fifteen other businessmen to hear.

This is the circumstance in which Kit Fitzroy first meets his half brother’s pretend girlfriend. At this point, Kit only knows that this provocatively corseted girl with the high heeled knee boots is giving the shove to some poor French guy who, from the sounds eminating from the phone, must have been nursing his broken heart in the bottle. Kit isn’t adverse to a light flirtation and thus when, at the end of the train ride, he finds out the identity of Sophie, he immediately forms a bad impression. Unfaithful gold digger.

For Sophie, her attraction to Kit is untimely but she knows that Jasper is her gay friend and not her lover and thus she just doesn’t act like Kit thinks she should act.

Kit has always had a strained relationship with his half brother, in part because his father has always preferred Jasper to Kit and has always been cruel to Kit in small and large ways. Yet Kit cares for Jasper and doesn’t want to see him get taken in.

As Sophie and Kit spend more time together in the house, their attraction deepens. Sophie feels less guilty but she wants to come clean so that their feelings can develop naturally. The stern and businesslike Kit is beset by guilt and knows that an affair with his half brother’s fiance isn’t likely to help mend fences.

This book has a great blend humor from subterfuge (which also included keeping Jasper’s real love away from the party) and ANGST (or agnst as I prefer to spell it) from the forbidden love of Kit and Sophie. Kit isn’t an asshole but trying to protect his home, his family and cope with the lack of support and affection from his family. Sophie is a charming girl who who is the perfect foil. He desperately needs someone to love him and Sophie is ready with open arms. Sweet, funny, and charming. B+