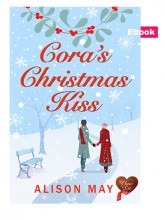 Can you expect a perfect Christmas after the year from hell?

Cora and Liam have both experienced horrible years that have led them to the same unlikely place – spending December working in the Grotto at Golding’s department store.

Under the cover of a Father Christmas fat suit and an extremely unflattering reindeer costume, they find comfort in sharing their tales of woe during their bleak staffroom lunch breaks.

But is their new-found friendship just for Christmas? Or have they created something deeper, something that could carry them through to a hopeful new year?

It’s a rare novella that can convince me that two people are in love by the end of it. If the two start out as strangers and I’m convinced of true love by the end then we’re talking rare and wonderful. This one does it. It also makes me think that I might need to put out cookies and milk and hay on December 24th before I go to bed. And I haven’t believed in a long, long time.

I thought the format was a wonderful, inventive way to tell the story – in little chunks each day in, as the couple both think, an almost therapy session kind of way. With their identities hidden, they can be totally honest and upfront during their break time confessions and get to tell their stories without judgement. The details remains a mystery to us as well because of the “flashback” way it’s presented in that while we are learning the past events, they’re happening to the characters. Little by little, slowly and gently, Cora and Liam begin to develop from coworkers in hell, to confidants, to friends, to maybe more?

Since Cora didn’t actually come off very well in last year’s novella “Holly’s Christmas Kiss,” could she be redeemed? Despite their seeming differences, the events Cora and Liam experience over 2014 are very parallel. As Cora’s financial star sinks following the meltdown of her financial firm, Liam’s rises due to his unexpected inheritance. Both of them have to deal with huge and sudden changes in their lives, how others see them and how they now view themselves.

Liam is the unbelievably decent sort who knows deep down that the bequest left to him by a stranger can’t possibly be for him and who is determined to either give it back or see it gets to the right person. He’s also afraid of how the money will change his life and the way people see him. Unfortunately, he’s right. Even I was outraged at the fallout that follows. Poor Liam. He’s right in that celebrity isn’t worth it for the crap you have to put up with.

Cora is beginning to learn what true friendship means in how she relates to and knows more about Chris than she ever did her high powered former coworkers. She’s also gaining pride in a job well done whatever the job is v having to have status things – jobs, clothes, apartment. She’s appreciating people and experiences unlike a past acquaintance who can’t even enjoy his kids’ visit to Father Christmas. She’s never really been herself to anyone, even her first husband. She’s played the role, she’s escaped, she’s worked hard to change to a smart London sophisticate. She’s finally getting comfortable with who she is and where she is. The surprise twist of her story surprised the heck out of me. Like Cora I suspected something wasn’t quite right but just as with Liam’s outcome, the writing was excellent enough to make me feel slightly sick.

Out of the wreckage of 2014, Cora and Liam have to examine themselves about how they acted over the course of the year and find out who they truly are. What they’re made of. What they’ll go to the mat for. But the shake ups finally force Liam and Cora to face up to their new lives and discover what Cora’s flatmates Charlie and Fake Alan already have figured out about what’s important in life – though the explanation is right out of the “Spanish Inquisition”!

Cora shrugged. She didn’t exactly have many options. Places where she would be welcome, and which fell within her travelling budget, were limited.
‘You should stay here. I’m making a nut roast.’
Fake Alan groaned. ‘But it’ll be all right. I’m doing a proper turkey.’
‘Are you sure?’ Cora had only been in her shared home a few weeks.
‘Course.’ Charlie nodded vigorously. ‘Everyone’s welcome at Christmas.’ She pointed at the screen. ‘That’s probably the sort of thing that this lot’ll figure out before the end.’
‘Absolutely.’ Charlie was on a roll now. ‘And love. Love and people are the most important things.’
‘And the spirit of Christmas. The three most important things are love, people, the spirit of Christmas and helping your neighbours.’
‘You’ve gone all Monty Python now.’
Fake Alan shook his head. ‘Hold on. I’m going to get this. The four most important things are love, people, the spirit of Christmas, helping your neighbours, and a fanatical devotion to the Pope!’

When Liam and Cora finally become themselves – instead of being the “friends” to whom the events of the past year “happened” – it’s sweet and does feel as if they’re taking a leap of faith, venturing into their new relationship, heading into a future. And I do believe in Father Christmas and flying reindeer and that it’s better to fall in love before you fall in lust – just as Cora and Liam do. I’m feeling all homey and cheerful about now. B+

→ Jayne
Previous article: Review: My True Love Gave to Me
Next Post: REVIEW: Never Desire a Duke by Lily Dalton