REVIEW: Confessions from an Arranged Marriage by Miranda Neville

I should probably preface this review by saying that I’ve chatted with you on Twitter and what I know of you, I really like.

Ever since they met in The Dangerous Viscount, book two of your Burgundy Book Club series, I’ve wanted to see Minerva Montrose and the Marquis of Blakeney (known to his acquaintances as Blake) hook up. Confessions from an Arranged Marriage, Blake and Minerva’s story, opens with a London ball in Minerva’s honor. 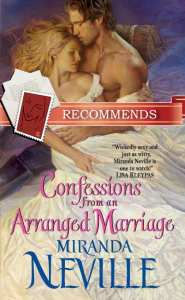 As a favor to their nephew, Minerva’s brother-in-law, the Duke and Duchess of Hampton have agreed to hold the ball. Their son, Blake, is to open it with Minerva. But Blake is enjoying his mistress’s company, and arrives too late. By the time he dances with Minerva, she is greatly irritated. She and Blake snipe at each other and are both glad when the waltz ends.

Minerva has already picked out a husband – a Member of Parliament named Mr. Parkes whom she believes she can groom into the next Prime Minister. Very much in favor of political reform, Minerva believes she can help bring it about by steering the sober, responsible Mr. Parkes through the waters of politics and diplomacy. But Minerva’s hopes to encourage this courtship are thwarted by a migraine. She takes headache powders and goes to lie down in the library.

Meanwhile, Blake is having an even worse evening. Though handsome, athletic, and heir to a dukedom, he carries a shameful secret. Blake suffers from what contemporary readers will recognize as dyslexia, although back in 1822, its existence was unknown. Consequently Blake believes his inability to read is due to pure and simple stupidity.

Blake does tries to cover up this flaw by pretending to be arrogant, lazy, and disinterested in anything intellectual. To Blake’s misfortune, his family has a long history of being in the thick of politics, and Blake is expected to follow in the same tradition. Relations between Blake and his cool, standoffish parents are therefore strained.

Even more unfortunate, Blake has confided his secret in an Eton friend, Mr. Huntley, and Huntley has used the secret to blackmail Blake. Now, just when Blake’s resulting debt has finally been paid, Huntley corners him. Blake manages to extricate himself from the conversation before Huntley can launch into his next demand, but he feels flooded with shame.

Escaping into an unoccupied room, Blake gets drunk on champagne overhears his friend Lamb planning a tryst with the amorous Duchess of Lethbridge, with whom Blake has slept in the past. As Lamb and the duchess plan to meet in the library in an hour’s time, the drunken Blake has a brainstorm. He and Lamb have a tradition of playing pranks on one another. Wouldn’t it be hilarious to arrive at the library first and take Lamb’s place with the duchess?

In the library, Blake discovers a tall woman lying on the couch, her hand covering her eyes. Believing her to be the duchess, Blake feels certain she is feigning sleep, playing at a naughty scenario. Blake has his head under her petticoats when the woman wakes up and shrieks “What are you doing?” Only a moment after her realizes she is the irritating Minerva Montrose, Blake turns and sees a group of people in the doorway.

Thus Blake and Minerva reluctantly become engaged. But when Blake realizes what his father wants most from him and Minerva is a grandson, an heir more worthy of the dukedom than his son, Blake indulges his hurt and anger with a petty decision: he will refrain from consummating the marriage so as not to give his father his heart’s desire.

Blake also believes all Minerva cares about is whether or not he can satisfy her political ambitions, and at first, he’s not entirely wrong. Minerva is so upset that her hopes of marrying Mr. Parkes were dashed that she is terribly disappointed that her husband will be Blake. Never having seen him read or discuss books or even events in the newspapers, she is not at all convinced that he is intelligent.

Since Blake believes himself lacking in intellect, Minerva’s initial lack of respect for him, and later her desire to mold him into a political figure, something he knows he can never be, hurt him enough that even after they are engaged, he does not dismiss his mistress.

Minerva’s is disappointed and unhappy to learn that Blake was seen with his paramour at the theater. When the two marry and travel to Paris for their honeymoon, there is a great deal of tension between them. Although Minerva is dreading her wedding night, she is also hurt and upset when Blake doesn’t come to her room.

But Blake was tasked by his politically inclined brother in law Gideon with finding which of the French are loyal to the crown and which to Napoleon’s son, and when he finally shares this objective with Minerva, they turn it into a friendly contest. The hunt for political intelligence brings the couple together, and Blake realizes what a fool he was not to touch his smart, confident and appealing wife.

Minerva for her part begins to see that Blake is intelligent as well as handsome, but wonders why he doesn’t apply himself more. She feels certain he could be so much more than he is, and if only he would allow her to persuade him to enter the political arena, they could be a couple to contend with.

Standing in the way of both Minerva’s ambitions and the romantic relationship is Blake’s secret. How can he trust a woman as bright as Minerva with the knowledge that he is stupider than he appears?

Confessions from an Arranged Marriage engaged me only partly in the beginning, because Blake and Minerva were so preoccupied with their personal needs and desires that neither looked beyond the surface of the other at first. While there is something refreshing about a pair of lovers who start out disinterested in one another, I would have liked for a few more hints of attraction to pierce that disinterest a little sooner.

Additionally, though this is a minor concern, the presence of most of the characters from the earlier books in the series during the ballroom scene felt like prequel baiting. While I realize there were natural reasons for them to be there, even so it can still feel artificial when several characters from earlier books appear in the same scene.

(As long as I’m on the subject of characters from earlier books, I’ll add that I felt a little sorry for poor Diana, in her third pregnancy in roughly as many years. I wondered how many children she and Sebastian would have by the end of the 1820s!)

Once Minerva and Blake began their honeymoon trip, though, their interest in each other as people sparked, and I started really caring about them as a couple. The more they started understanding and caring about each other, the more invested in them I became.

Blake starts out self-focused, but he grows up a lot over the course of the book. I didn’t always like him, since his decisions not to dismiss his mistress right away and not to consummate his marriage struck me as insensitive to Minerva. But even at his most immature, I felt for him over the dyslexia issue.

As the story progressed and Blake showed greater and greater maturity and love for Minerva while still fearing to disclose his secret, I understood more and more what a source of fear and shame his belief that he was stupid was, and how sensitive he had always been under his indifferent exterior.

Minerva, though more concerned with the greater good and England’s fate than Blake, and outwardly much more mature, had a different flaw. Her self-confidence was such that she started out certain that she knew what she wanted in a husband and that Blake was about as far from what she needed as a man could get.

But the more Minerva realized that Blake was not an idiot, the more I came to care about her. One of the pleasures of this book was her growth into a woman capable of seeing that intelligence comes in many stripes and therefore, one capable of not just accepting, but also respecting and admiring the man Blake grew into being.

By the middle of the book I was totally rooting for this couple, though their trials were far from over. I smiled at their witty repartee, found their love scenes hot, and one scene between Blake and his father even made me tear up a little for Blake.

Having now read all four books in the Burgundy Book Club series, I can say that your characters’ vulnerabilities, insecurities and quirks are consistently well conveyed. There is a warmth to the writing that comes from acceptance of the idiosyncrasies that make human beings imperfect and human.

I have just one more issue with the book, which is that sometimes I feel that the style of narration has an effect that is slightly distancing. At times I feel I’m being told about the characters rather than experiencing their emotions from the inside.

Even so, I ultimately had great sympathy and affection for Blake and Minerva, and was so glad to see them triumph over all the obstacles their relationship faced. I closed the book smiling and satisfied. B+.