I became interested in your writing after seeing that Jane had accepted one of your stories for her Agony/Ecstasy anthology. So I hied me on over to Ellora’s Cave and bought these two stories. I’m glad I did and I look forward to your anthology story even more now. 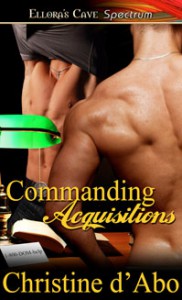 Simon’s bookstore is slowly sinking into the red and his personal life is non-existent, because the local kink-friendly club is more about teenage poseurs than real players. One day, he finds a mysterious business card in his mail. All it says is 1-800-DOM-help. He’s pissed enough to call the number and intrigued enough to go to the club that “The Operator” tells him about. There he meets Gavin, a willing sub he finds attractive enough to beat, then fuck. But Gavin runs away. Then shows up unexpectedly as the business consultant Simon hires to help him with his store. They have a strictly business relationship for three weeks until they both break, have another great night, and Gavin runs again. Gavin, of course, comes crawling back soon enough for   a wonderful reunion.

The reason Gavin runs is…unexpected and both sweet and slightly eye-rolling. Simon’s lack of a sex life is never really explained. He’s never had a relationship that included kink. He’s had subs and boyfriends, but apparently they were never the same person. He’s also a stubborn shit, too “domly” to take business advice, which is just stupid. And did they REALLY work 12 hour days for THREE WEEKS?!?! on a business and advertising plan for a small-town bookstore with one storefront?! I’d think Gavin’s bosses would NOT be pleased with him for that, forget about sleeping with his client!

The super-mysterious Kinky Klub of Doom, though…isn’t it possible for kinky people to find each other the same way other people do? Through mutual acquaintances, chance meetings in bookstores (and hey, Simon owns one!), bumping into each other running at the park…anything? Sigh.

The review sounds like a C grade, but the reading experience was a B-. So… 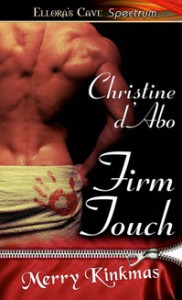 I loved the first chapter of this 40 page short story. Leo sets his preparations to fist Max all the while flashing back to the drunken conversation when Max finally tells him that this is what he wants. The tension of the preparations and Leo’s hesitation with what he’s doing are multiplied by Leo’s memories of desperately trying to get Max to tell him what he really wants for Christmas. It’s very well done and a lot of fun.

Time dropped away. Nothing mattered beyond Max. What he was feeling, the looks on his face, the soft noises escaping him-‘Leo’s attention locked onto everything. A rush of power flowed over him, the knowledge that Max had given up complete control, trusted him to do something that could seriously hurt him if done wrong-fuck, Leo wouldn’t have believed anyone who’d told him how much of a turn on it would be.

Don’t get me wrong, you detail the actual physical act brilliantly. But the love and trust comes through loud and clear during the whole short, making it a romance, rather than just stroke fiction. The ending, after the scene, was a bit over the top (and really, if things aren’t going brilliantly between them, it also seemed a bit of a risk), but it was romantic and fun and cute nonetheless. After reading this one, I really can’t wait to read your Agony/Ectasy story. 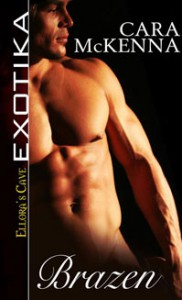 Someone whose opinion I trust told me to read your Willing Victim, which we’ve already reviewed here at Dear Author. I’ve still got that on my phone unread, but I loved the excerpt of Brazen too much not to buy it too.

Catherine is a photographer and a divorcee, rich, living in a large house by herself in Boston. She tells her assistant that she wants a harem and the ensuing conversation about specifications for the men in her harem is exquisite and the reason I bought the 45 page short story.

Of course, as soon as I get passed the excerpt, we find that Catherine doesn’t actually want to have sex with the men, or, more accurately, the boys. She wants to torment them, make them come, and send them on their way. She doesn’t want a relationship, she wants to objectify them. As she says, it gets her off.

Sean throws her plan into disarray. He’s disobedient, he’s too old, he kisses her, he torments her. Although the story is told entirely from Catherine’s point of view,  I love the mix of submissive and dominant in Sean, the need to see to Catherine’s desires, to do what she says, but also the cheekiness that makes him push her again and again.

The sex between them, as a result, is super-hot. Jane often says how difficult she thinks it must be to write truly arousing sex. I’m firmly (harhar) of the belief that truly arousing sex is all about breaking through emotional barriers. It’s not hot unless it’s breaking a character’s own taboos, unless it’s threatening their emotional existence, moving them forward somehow. You do that brilliantly here, showing how Catherine fights against her desire for Sean because of how it threatens her hard-won balance. That’s what makes the story so hot. And it’s definitely hot.

This is not a romance. Sean and Catherine do not establish a relationship, although the story is certainly left open at the end.   As much as I loved the smartness, the sly, seductive fascination of this story, I don’t want Dear Author readers to think it’s a romance. It’s fascinating, clever, hot erotica, and it makes me want to read all your other books, especially the Shivaree/Backwoods/Getaway trilogy of shorts, but it’s not a romance.