I loved the first novel in your Spiritwalker trilogy, Cold Magic. It introduced us to an alternate earth in which the ice shelf never receded, the Empire of Mali fled out of Africa and formed an alliance with the Celtic tribes, and colonialsm never happened the way it did in our own history. Cold Magic told the story of Catherine Barahal, who grew up in a family of spies and who, in place of her beloved cousin Beatrice, married into a powerful clan of cold mages. 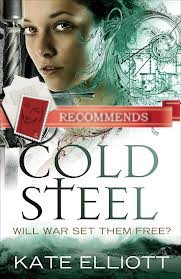 The second novel, Cold Fire, however, left me enthused and unsure. I’d gone in wanting more adventures of Cat and Bee. What I read instead was a story in which Cat and Bee were jerked around and betrayed by various men. And while I understood the underlying critique of the patriarchy, it just wasn’t what I’d been expecting. Those mixed feelings made me less confident about the final novel, Cold Steel. Would it be like the first novel, which I loved, or the second, which left me ambivalent?

Nevertheless, I wanted to see how Cat and Bee’s adventures would end, so I picked it up. Thank goodness I did because not only was the story what I’d wanted, it was a great conclusion to the trilogy.

Cold Steel opens with Cat desperately wanting to go after her husband, Andevai, who has been abducted by her father, the Master of the Wild Hunt. Unfortunately, she can’t because she’s also wanted for the murder of a queen. (The details of both these situations are covered at the end of Cold Fire.) She has to face the accusation but while the empire who lost its queen wants her blood, the colony where she makes her home wants to use her as a figure to rally behind. This is all well and good, but she has things to do, places to go, and husbands to rescue.

But even after Cat reunites with Andevai, further conflict awaits them. Revolution has come to Europa. The voices against the oppressive rule of the cold mages grow louder, and the armies of Camjiata have taken advantage of the situation. Throw in the machinations of the spirit world and a disagreeable man from Cat’s past, and she has her hands full.

I was excited to see Cat and Bee go globe-trotting in this one. Even though they don’t spend the entire book together (due to Cat having to go into the spirit world on multiple occasions and Bee’s inherent nature not being compatible with the landscape), the cousins spent enough time going on adventures and getting into trouble that my desire for interactions between female characters was satisfied. As far as I’m concerned, the fantasy genre needs more stories like this — female friends going on quests together and driving the adventures rather than following a male hero around or being a sidekick.

I also liked that the conflict between Cat and Andevai took on a different form. It wasn’t due to personalities clashing. This is not the beginning of their romance. Nor was it due to drawn out romantic insecurities or the introduction of a love triangle. Some series do this to their main couple in later books and it turns off many readers.

Instead the conflict was caused by their respective families. Cat’s father is the Master of the Wild Hunt. That is a definite issue on multiple levels. But the more immediate conflict was brought forth by Andevai’s family. In Cold Steel, the mansa of Four Moons House gives Andevai everything he’s ever wanted and because of Andevai’s nature, this traps him in the most effective cage possible. This puts strain on Cat and Vai’s relationship because for all their talk of revolution and changing the ways of the mage houses, there is a true risk of Andevai giving into temptation and becoming everything he hates. The question is whether Cat will stand by and see if he becomes the man she hates or remains the one she eventually fell in love with.

I loved that while the story is told from Cat’s POV and revolves around her adventures, we catch glimpses of Bee’s. Her story intersects and aligns with Cat’s but she has her own life. She becomes an activist speaker for the revolution! How great is that? She’s perfect for it with her looks and her gift with words. She also sleeps with multiple men and not once is she slut-shamed for it.

What I’m less thrilled about: Drake. Drake is the man who took advantage of Cat in Cold Fire and coerced her into having sex with him in order to be cured. He makes a return in Cold Steel as Camjiata’s top mage. His obsession with besting Andevai and vindictiveness towards Cat are one-note and unsubtle, and there was a lot of it. He’s the bad guy. We get it. (How do we know he’s the bad guy? He slept with the heroine when she was incapable of giving proper consent!) I suppose when it comes to antagonists, I prefer multifaceted characters with complicated motivations like Camjiata or the Master of the Wild Hunt.

Other than that, there are many other background things to like: the gender fluidity of the dragons, the question of what form revolutions should take — outright rebellion or change from the inside, the various ways women show their strength and influence. There’s a lot to like here.

I know many readers shared my opinions — adored the first book and felt let down by the second book. But if you count yourself among that number, don’t let the second book stop you from picking up this one. I think it lives up to the promise of Cold Magic. And if you’re new to these books, know that it’s a completed trilogy, which is something not often said about the fantasy genre these days. B+