I read your debut Amy Lane mystery, and as soon as I was done I went to Netgalley and requested the next installment for review. Life intervened for a couple of weeks, but when I had a spare hour I started reading Code Runner. As I anticipated given my experience with Binary Witness, I had high hopes for this novel and I wasn’t disappointed. Code Runner is a very strong followup to the first book and I am firmly hooked on the Amy and Jason chronicles. 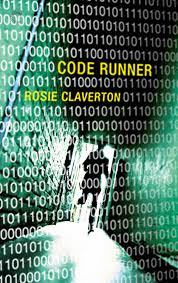 my Lane, computer hacker and agoraphobe, and Jason Carr, ex-con and cleaner/assistant, have settled into a comfortable relationship. Amy’s house and person are well cared for and Jason is enjoying having a proper job. But their new case puts Amy, Jason, and any number of other people close to them in danger, with several characters’ past and present lives colliding.

Unlike the mystery in the first book, this one finds Jason at the heart of the crimes, and even though he is a more or less innocent bystander, his ex-con background makes him an obvious suspect and he winds up back where he hoped never again to be: in prison, meeting old friends and enemies. As a result, the reader spends a lot of time with Jason, and Amy and Jason spend quite a bit of time apart. Jason engages in some behavior that verges on TSTL, although we can understand his motives. Nevertheless, I couldn’t help but think that the actions that got him into trouble are *exactly* the kind of thing for which a heroine gets a ton of grief from readers. So I was glad to see that he had to pay the price, however painful it was to watch those consequences unfold.

I don’t want to say too much about the mystery plot because it’s hard to describe without giving away spoilers. I enjoyed it quite a bit, I didn’t guess the full story until almost the end, and I thought the pacing and overall development of the mystery arc was more successful than in the previous novel. The criminals and victims include present and former friends and associates of Jason as well as members of the police force, and we get to know more about Cardiff detectives Bryn and Owain, Jason’s sister Cerys, and Amy’s sister Lizzie.

The relationship between Amy and Jason continues to develop, and in this installment we get hints that each might be feeling more than friendship for the other. Nothing explicit happens, but in spite of that (or perhaps because of it), the few, fleeting moments when they share a sense of something that might happen between them are quite powerful. I hope Claverton doesn’t rush the relationship, because I love the way each is learning more about the other, and the dry, understated humor that often accompanies their observations provides a bit of relief from the ugly stuff. And I get a kick out of the role reversals:

Jason was cleaning the oven. Amy had learned swiftly that if Jason was cleaning the oven, elbow-deep in grease and melted cheese, he was incredibly pissed off. The first time had been the trashy tabloid article where some so-called journalist had scraped together every flimsy piece of “evidence” he could find and concluded that Jason was a dangerous criminal who police had pardoned to bring vigilante justice back to the streets. They’d quoted liberally from a number of anonymous sources—who refused to be named for their safety.

When Owain had apologetically drawn their attention to it, Jason hadn’t said a word. He had just retreated to the kitchen and scoured the oven from top to bottom for two hours. Meanwhile, Amy had launched a DDoS attack, exploiting an old botnet from her blackhat days to flood the tabloid’s antiquated servers with corrupt code. The site had been down for over twenty-four hours, and the creaking old system had never fully recovered. It had been exceedingly satisfying.

At the same time, though, I’m enjoying the possibility of seeing more romance develop over the course of the series.

As in the previous installment, the sense of place is effectively developed; this isn’t a story that could take place anywhere, but rather it is firmly rooted in its context. We travel outside Cardiff to the countryside and to the coast, and the different locations play critical roles in the story. The book is atmospheric without drawing attention to itself. The writing is still a bit rough in patches, but it suits Jason and several other characters’ relatively rough backgrounds and even Amy’s lack of social acumen.

There are no easy fixes for the difficulties the characters face. Amy is still agoraphobic, and although she takes a big step forward, there’s no guarantee she won’t retreat again. Jason’s past continues to shape his present and future despite his efforts to overcome the hurdles it creates. Code Runner provides the next step in the classic path that a good mystery series takes, and my biggest regret when I finished was that I don’t know when the next installment is due. At this point Amy, Jason, Cerys, Bryn, and Owen feel pretty real to me and I want to spend more time with them. Grade: B+

P.S. I don’t usually pay attention to covers, but wow, did you ever win the lottery on yours. I’d buy print copies just to be able to display them.