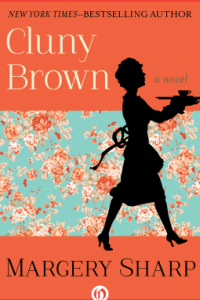 Years ago, one of the first Friday Film Reviews I did was of the movie version of Margery Sharp’s novel “Cluny Brown.” I had never read the book but several posters commented – not all positively – on how much they like it or how it differed from the movie. Now that I’ve read it, I can see the delicate but pointed social commentary on the changes of the late 1930s: the end of an era with the Old World giving way to the New.

The problem with Cluny Brown, says her Uncle Arn, is that she has to “learn her place” – presumably as one of the working class. As he says, they have their place and the gentry have another and both are fine but boundaries are not to be crossed. This frustrates Cluny who wonders why can’t she have tea at the Ritz if she has the money. Cluny’s always looking for something to happen, for something new. She thirsts for an adventure. The answer to this, per Uncle Arn, is for her to go into service.

But “service” has sadly changed and the household at Friars Carmel is testament to that with Cluny and fellow maid Hilda – kept on despite her Problem – serving as all previous six maids once did under the stern direction of Mrs. Mailes and Mr. Syrett. I enjoyed reading Hilda’s country Devon dialect and seeing that all working class English don’t have to be portrayed with a Cockney accent. While vague rumors and reports of the changes in society had merely been mentioned by Mr. Andrew while at Friars Carmel, Cluny begins to personify them to the disapproving upper staff. Visiting with the Colonel’s dog on her afternoon off? Who ever heard of such? It’s all right for Mr. Belinski to startle them – after all, he is foreign and that’s to be expected – but a maid? Cluny still doesn’t know her “place.”

Lady Carmel is like a swan gliding along serene and elegant, all her work at Maintaining Standards and adroitly managing everyone hidden from view as she gracefully smooths out unpleasantness. Sir Henry is the standard country English aristocrat sure of his place and slightly unsettled by anything foreign. They are the Old Guard. Meanwhile Mr. Andrew and the young woman he wishes to marry, the Honorable Betty Cream, are the restless young who also sense changes to come but aren’t sure how they will welcome them.

Cluny is questing as well – questioning why she has to have only one place in life, only one path. Cluny unsettles people not all of whom are happy about it. She makes them think of and be aware of the vague uneasiness spreading across Europe and England. Belinski too has stirred things up at Friars Carmel and for varied reasons most of the Carmels wouldn’t be sorry to see him leave. He’s not what was expected and it’s quite right for him to be heading off to America the land of new and placeless. Ms. Wilson, the village chemist (pharmacist) who has been quietly seeing Cluny is also of the settled and rooted. There’s nothing bad about that but also no hint of the wide-open that Cluny has been searching for.

The book is looking back on what was as well as looking forward and grabbing what is to come. Two different lifestyles, two different viewpoints. Is one better? No. Is one worse? Not at all. Everyone wants Cluny to find her place and to know her (social) place. But Adam gives her someone to whom to belong and who will never leave her plus the whole wide world from which to choose. In the end, Cluny and Adam literally say goodbye to the Old World and hello to the New. “Cluny Brown” is a delightful comedy but with a sharp, social message neatly wrapped in it. B+