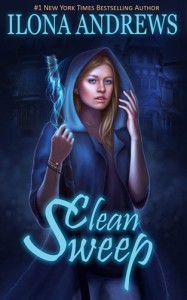 On the outside, Dina Demille is the epitome of normal. She runs a quaint Victorian Bed and Breakfast in a small Texas town, owns a Shih Tzu named Beast, and is a perfect neighbor, whose biggest problem should be what to serve her guests for breakfast. But Dina is…different: Her broom is a deadly weapon; her Inn is magic and thinks for itself. Meant to be a lodging for otherworldly visitors, the only permanent guest is a retired Galactic aristocrat who can’t leave the grounds because she’s responsible for the deaths of millions and someone might shoot her on sight. Under the circumstances, “normal” is a bit of a stretch for Dina.

And now, something with wicked claws and deepwater teeth has begun to hunt at night….Feeling responsible for her neighbors, Dina decides to get involved. Before long, she has to juggle dealing with the annoyingly attractive, ex-military, new neighbor, Sean Evans—an alpha-strain werewolf—and the equally arresting cosmic vampire soldier, Arland, while trying to keep her inn and its guests safe. But the enemy she’s facing is unlike anything she’s ever encountered before. It’s smart, vicious, and lethal, and putting herself between this creature and her neighbors might just cost her everything.

“It doesn’t matter where you are from. You’re here now and it’s my job to protect you and everyone here. I’m doing my job and I don’t appreciate the drama. Something isn’t right with you and this property. Strange things happen around it. I don’t know what’s going on, but I will find out. You could make it easier on yourself by coming clean.”
“Sure. This is a magic bed-and –breakfast and the two guys in my kitchen are aliens from outer space.”
“Right.” Officer Marais turned. “I’ll let myself out.”

Oh Officer Marais, if you only knew. There are so many reasons why I enjoy the books written by Ilona Andrews’ writing team – intricate world building, action, humor, great characters, and have I mentioned humor — but when this story was published as a free serial on their website I ignored it even though it was not an easy task to do so. I cannot handle reading a story in bits in pieces especially if one of those bits and pieces will end up in a cliffhanger. I did not want to get irritated at the book for something which is clearly my issue and not the book’s fault, so I was hoping that one day they would publish this one as a single book. And when they finally did of course I bought it.

The world building in this book was *excellent*. I could not help but compare this book with the first book in my favorite series by these writers, the Kate Daniels series. Of course, that was their first book and it is not fair to compare the writing, but it is clear how far they have come – there is no info dump of any kind in this book. The information about this world is given to the reader when the story warrants it and no earlier, and the information fits the action and moves the action along. I am used to the authors using all kinds of mythologies and fantastic creatures in their books and using them to create original worlds, but in this book they did something even I did not expect. I have read a lot of books where vampires and werewolves played an important role, and I can honestly state that I did not think that it was possible to add anything original to the vampire and werewolf lores. I thought I had read it all. Well, they proved me wrong, apparently I had not.

As you can see from the blurb, Dina is an innkeeper with magical abilities who runs an unusual bed and breakfast. She decides to get involved because something terrible has happened, something which may put not only the lives of her guests but also those of her neighbors and even herself in danger. Apparently innkeepers of this world, which is very similar to the Earth of our time but with some additions have some unusual duties and responsibilities and can do interesting things. These Inns apparently exist in the several dimensions/realities at the same time and serve as Gateways to earth for the guests from other galaxies/worlds. Innkeepers’ first loyalties are to their guests and Inns and if I understood correctly more often than not they are neutral to everything else around them as long as it does not threaten their guests. But I am guessing that in the rare circumstances they can decide that neutrality be damned and join the fight as Dina did.

I thought Dina was awesome. I think the regular and magical part of her nature were blended really well and I just thought she was a very likeable human being, somebody who would be fun to have tea with, if I didn’t end up on her bad side. I liked that Dina was kind enough to try to help knowing that other people and animals could end up dead, but also knew when to ask for help from others. I thought that she had a great sense of humor and I loved her dog.

“Sean grabbed a young oak branch and jerked it off the three. Beast launched herself and he swung the branch like a bat, trying to knock her aside. With a sound somewhere between an upset wolverine and a pissed-off bobcat, Beast clamped on to the branch. Sean jerked it back and forth, trying to get her loose. Beast hung on and went airborne. Four rows of teeth crushed the wood – chomp-chomp-chomp—and Sean stumbled back, a stump of a branch in his hand.
Beast landed on her paws and bared her fangs, “Awwwwwreeeeeeoo!”
“Oh shit”.
*****
“A moment later Beast trotted back, climbed the steps, squirmed through the dog door, and collapsed on the rug, exhausted.
I cuddled her up. “Best dog ever.”
Beast rubbed her face against my shirt and licked me”.

If you were to ask me whether there is a romance in this book, or whether the handsome werewolf and vampire are mentioned just for the fun of it, I would say that there is definitely flirting going on but nothing more than that yet. And yes, there is a Twilight joke at the end of the book.
“I suggest you give up now. According to my research, in a vampire-werewolf love triangle, the vampire always gets the girl”.

The blurb mentions Sean Evans, “the alpha strain werewolf” (I will let you to find out for yourself what “alpha strain” means, because going into that would be revealing some important spoilers), and the vampire soldier Armand, and both of these men seemed to me to be great potential candidates for Dina’s affection. To me it was clear that she was at least a little bit attracted to both of them.

This story is not a romance yet – sparks fly when Dina talks to them, and there is a kiss involved between her and one of the men, but nothing more than that. The guys and Dina are really busy in this book trying to take care of the threat, and there is no Romance ending. However, in the end note the authors say that they will be writing a sequel to this book in 2014, and if they decide to include a romantic storyline I think it would be really easy to throw it in, because I thought Dina had a great chemistry with both guys. Whether it will happen or not, I have no idea though.

I do not know how many books are planned in the series, but there are several potential storylines, because there are so many tantalizing loose ends left at the end, and I can’t wait for at least some of them to be explored. The characters in the story are all interesting, but all of them, even Dina, could use more development .There are some characters mentioned who could make guest appearances in upcoming installments and there are some characters whose fates are unknown, whose storylines could be resolved in the future. In other words, I think this is how a first book in the series should be written.