Why did I decide to try your novella? It sounded cute, it has a sorta Christmas-y theme, and …..well, that’s it, actually. Yes, I know it’s now after Christmas but it’s still the Holiday Season so I figure I’m still good. Right? 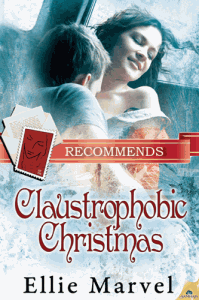 Darcy Burkell and James Jones grew up together but both escaped their small Tennessee hometown. She now runs a travel agency while he’s a photographer. Six months ago, Darcy’s brother Chip hooked them up professionally and since then, James has done what he loves – traveling far and wide taking gorgeous photos which Darcy now uses in her travel brochures. The day before Darcy was planning to begin her drive home for the Holidays, James unexpectedly shows up and offers to drive with her. To Darcy, it was an “out of the blue” offer while to James it was the natural progression in the relationship he thought they were forging.

But Darcy’s got two issues that cause her to turn him down flat. One: She doesn’t like surprises and this one floors her. Two: She’s got claustrophobia – bad, bad claustrophobia and she doesn’t want James to find out because then he’ll pity her plus she knows there’s no hope of any relationship between them since he loves to travel and her traveling is limited to car rides with lots of pit stops.

Thus they find themselves on the same road home at the same time with the Weather Channel predicting a record snowfall/ice storm for the region. When the inevitable happens and traffic grinds to a halt on the now iced over Interstate parking lot, will these two find a way to stay warm without running car engines and using up gasoline? And what will James do when he discovers the real reason Darcy doesn’t want to date him?

I’m glad I read this book for a couple of reasons. I have this thing about the first book I read/finish in the new year. If it’s good, I take it as a positive sign for the year to come and for me this is a B+. So far, so good. Secondly, it’s funny. Darcy ogling James at the rest stop is funny, Darcy spilling jelly beans all over her car and in her bra is funny. Darcy and James’s truck rocking being interrupted by kindly, good Samaritans is hysterical. And the post Holiday scenes at both the Jones and Burkell households are family dynamics at their best – or worst, as the case may be.

The conflict between James and Darcy is certainly different, or at least I’ve never read it before. At first I thought Darcy was not giving James any benefit of the doubt but then the explanation of her past relationships illuminated her thought processes. James does seem to jump the gun about dating Darcy, and my, his family gets the bit between their collective teeth and runs with it, but I guess that just shows how much he cares for her in his guy way while maybe his family really wants to marry him off.

I did worry a bit when it appeared that James was going to try and force/strong arm/guilt Darcy into changing but she stands up for herself and James snaps out of his idiocy/thoughtlessness. And his apology was nicely done and neatly delivered. Although I’m not generally a fan of epilogues, this one is a beauty and ends the story delightfully. Yes, thanks to “Claustrophobic Christmas” I’m off to a good beginning for 2012. B+