I have long been a fan of your books, in particular your contemporary voice, which I find works for me on a variety of levels. I read Heart of Darkness, the first of your Bound by Magick series, last year and found that the world building was solid and inventive, and introduced a fascinating cast of characters made up of all sorts of otherworldly species. 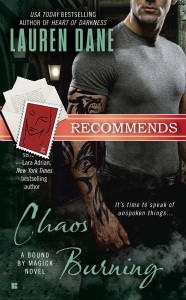 Chaos Burning focuses on Lark Jaansen, a witch who is also a warrior. Lark has been called to Seattle to assist with the management of Clan Owen’s Hunter Squad while their current leader is dealing with a challenging pregnancy. Lark has been to Seattle before and gets along well with Meriel, who is The Owen, the leader of the clan of witches. When Lark arrives in Seattle, she is met at the airport by Simon Leviathan, a Lycian, or a very powerful wolf shifter from behind the Veil. She and Simon know each other well and have enjoyed drinks and cards together, building a pleasant friendship that they both value. Simon finds Lark to be entertaining as hell. She’s a wild dresser, says anything at all that comes to mind, and is happy to kick some ass when needed. She’s basically the complete opposite of everything Simon thinks he might want in a mate. Lark is definitely attracted to Simon; he’s gorgeous, well spoken, funny and a true gentleman. But she also knows he has no interest in her romantically, so she’s more than happy to build a friendship with him.

But when witches as well as Others begin disappearing, Lark and her team suspect mages, or dark witches who siphon power, are the reason. But as more and more Others begin disappearing, a murmuring about an entity called the Magister begin to surface. The Magister is so ancient that really, no one on Earth or behind the Veil has any memory of how to fight it. All they know is that its existence is potentially devastating for Other-kind, and if it is allowed to take form, the results will mean the destruction of many non-humans and possibly Earth itself.

Because of Lark’s ability to dive into the minds of the mages reading their memories and intent, and her dangerous job, she is often injured. Her injuries being out Simon’s protective side. He has land near Seattle where he makes his home. Knowing that Lark’s magic can be revived by communing with nature, he offers her unfettered access to his home and land. It is during her time there that their attraction begins to grow.

Simon deeply admires Lark’s strength and her single-minded desire to pursue those who are hurting her people. As he gets to know her, he begins to realize that Lark must be his ne’est, or the key to his happiness — a mate. He also realizes that he is 600 years old, and Lark is 25. He must be careful not to rush her into anything, despite his overwhelming drive to protect and shelter her. For her part, Lark is all for a physical relationship with Simon, she really enjoys his company. But she’s also unsure whether she’ll be staying in Seattle, and whether anything could ever become of their growing attraction. In the midst of the impending danger and turmoil of the Magister’s imminent arrival, will Simon convince Lark that they are meant to be?

I’m not really sure that my blurb does justice to balance of world building, danger and romance this book features. While the impending evil is scary and dark, and the action is exciting, the reader never loses sight of the fact that this a romance. The action in story does propel the storyline, but it also informs the romance. Simon’s confidence in Lark’s strength and ability is what makes him such a wonderful hero.

“I’d feel better if you two were there. Go with Nell and William. Get back to Meriel.”

Simon saw the battle she waged all over her features. She wanted to be there at the house because she didn’t want any of her people to get hurt. But Gage was right and if he hadn’t suggested it, Simon would have instead. Lark was the best person to get back to Seattle.

“You’re the key here. My key.” Simon kissed the top of her nose. “But also the key to the situation. You’re a warrior. This is when a warrior is needed most.”

Simon is one of my favorite hero types – the Caregiving alpha. He’s honorable and sweet. He’s thoughtful and romantic, and he can kick a little ass without breaking a sweat. It’s his confidence and honor that make him such a compelling hero, he knows he has power, but he also has confidence in Lark’s abilities and he respects them. He and Lark are wonderful opposites, who often approach issues differently, but are united in their wish to defeat the evil that is coming. Lark is young, but she’s very smart, and she’s confident and funny, making her a truly likeable heroine. One I’d love to have a drink with. They combine to make a couple that is very easy to pull for.

The Bound by Magick series has a well executed, imaginative world that is easily navigated by the reader. I never wondered who was who, or which species did what. The narrative easily drew lines for me so I understood each species’ motivation and how they interacted. While the world-building is in no way simple, it is easy to understand and described vividly. In the midst of the world-building is a fantastic Big Bad who stretches the abilities of the supernatural beings populating the world, and offering a strong impetus for the hero and heroine of the piece to work together. Additionally, the hero and the heroine are wonderful foils for each other, and are both very likeable, which gave me great reason to root for their Happily Ever After.

If I had any small complaints about the book, it is that the book ends quite abruptly, in cliffhanger fashion. Our hero and heroine do get their HEA, which I was glad for. But you lay the foundation for what will come next in way that I found myself aggravated to have the book end on such a note of anticipation. I understand why you did it, and believe me, I’m desperate for the next installment of the Bound by Magick series, but I wish that this book didn’t feel like it ended almost mid-scene.

My second comment would be that I’m not sure how well this book stands alone. I read Heart of Darkness, so was well familiar with the world, but as I was reading, it did occur to me that readers entering the world for the first time would have a strong sensation that they are missing something, as Meriel and Dominick (the couple from the first book) have such a large role in the story. In my opinion, readers would be better served reading Heart of Darkness first.

Those minor complaints being stated, I found Chaos Burning to be a compulsively readable paranormal romance, one that I recommend for interesting world building, page turning action, and a truly satisfying romance. I give Chaos Burning a B+.