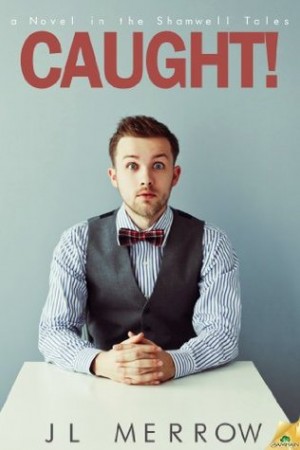 There are some books which take time to reveal their joys and others which hook a reader from the start. Each have their own place – sometimes the book that is not immediately catchy turns out to be a comfort read for years to come. This was a book I relaxed into from the beginning.  Told from the first person perspective of elementary school teacher Robert Emeny, Caught! is a little delight.  Just like the picture on the cover, Robert is a somewhat quirky man but he is never a caricature.  He is precise and ordered and kind of shy.  He prefers bow ties but has a few of the regular sort of ties for emergencies.  Apart from when he’s running or sleeping, he’s always wearing a tie.  He’s the type of guy who knows he has precisely twenty-six minutes of his lunch break remaining and that he takes thirteen minutes in the shower.  While it could come across as annoying, in Robert it was endearing. I think that was because at a bone-deep level he is a genuinely kind and honourable man.

Robert has recently moved to Shamwell after leaving his previous teaching role (at a prestigious high school teaching A-Level Maths) in sudden circumstances which are not fully revealed until late in the book.  He has taken a job at St. Saviour’s Elementary School  where he earns significantly less money. It is, in many ways, a step down for him.  Fortunately, some years after the death of his father (which left he and his mother penniless), his mother remarried well and Robert now has some financial support from his family.  This support enables him to rent Old Hatter’s Cottage in the middle of the village.

Robert is sometimes slow to pick up on cues and tends to second guess himself, so his romance with Sean Grant, a local pest exterminator, has a shaky start.  Sean’s twin nephews Wills and Harry (yes, really) are in Robert’s class (where Robert is called “Mr. Enemy” by almost everyone).  As Sean’s sister Debs (a single mother)  is recovering from recent chemotherapy treatment, Sean often does the school run and attends other school functions.  Sean is openly bisexual (yay for more bisexual representation!) and Robert is initially convinced Sean’s interest lies in the direction of Rose Wyman, a fellow teacher at St. Saviour’s and Robert’s friend.

Robert does have some anxiety over dating a bisexual man – he wonders if Sean will get a craving for ladyparts and leave but they talk about it and Sean is able to put Robert’s mind at rest on that score.  The explanation is simple but not simplistic and makes sense without being trite. I felt it was an understandable concern – Robert is only attracted to men so he is a bit at a loss to understand bisexual attraction but once he and Sean discuss it, the matter rests and falls into the category of “not a big deal”. I appreciated it was there but that not much was made of it.

At the same time he left his previous teaching post, Robert’s relationship with fellow teacher, Crispin, ended too.  After his heartbreak over that breakup and the circumstances surrounding it, he is shy of getting involved again.   Sean is a bit touchy about the social differences he perceives between he and Robert but Robert isn’t at all a snob.

Even though the story is told only from Robert’s perspective, I felt I got to know Sean reasonably well, as there was plenty of dialogue in the book.  I enjoyed their interactions and the way they celebrated their differences as well as the things they had in common (of which there were surprisingly many). They have a good sexual chemistry and there are some sexy scenes but it’s not terribly explicit, which I thought suited the book perfectly.

The kettle boiled noisily and we broke apart, both of us breathing rather quickly. “Um. Coffee?” I said, my voice shaky.

I gave him a sidelong look. “Not that hidden, surely?”

“Depends. I mean, don’t get me wrong, I like the way you dress— it’s different and fun and all that—but yeah , it’s not exactly in-your-face sexy, is it?” He gave my rear a gentle squeeze. “Course, when I saw you in your running gear, with your hair all messed up and that… I mean, most of the time you’re so put together, you know? It was like… Shit , this is a bad analogy, ’cos I liked you before, anyway, but it was like that really corny moment in films when the girl in the lab coat takes off her glasses and shakes out her hair, and suddenly she’s gorgeous.”

I frowned. “I don’t wear glasses. And my hair’s too short to shake out. Plus, and I really feel I should emphasise this point to avoid any possible misunderstandings, I’m not a girl.”

Sean laughed. “I told you it was a shit analogy.” He brought one hand up to stroke my face, and I fought the urge to nuzzle into it as his other hand slid farther around my waist. “But you are gorgeous.”

I enjoyed Robert’s interactions with the students and in particular, young Charlie. I loved how Charlie grew through the course of the book. The scene with Charlie’s dad was a favourite but I will leave it for readers to find out why.

Rose was somewhat of a caricature, even though I liked her quite a bit.  She is loud and forthright but as it happens, that is just what Robert needs – without her interference perhaps he and Sean would never have been. She did have some story of her own and wasn’t merely there to be the enabler for Robert’s romantic adventures but I think some will regard her as too over the top and stereotypical.

Fordy’s always rather exuberant brows had now entirely met in the middle, like a couple of very small, coy ferrets exchanging a kiss.

There were a few times in the story that I felt Robert’s dialogue didn’t fit my image of his character – mostly this was when he was being a bit sexually provocative but this may well have been a failing of my imagination rather than anything else.

Generally, I prefer when characters talk to each other and I’m not a fan of misunderstandings.  That said, Robert has very good reasons for not sharing his secrets with Sean immediately and I didn’t think their falling out over it was drawn out.

Robert, somewhat unexpectedly for him, finds a home and a community in Shamwell and he and Sean make a lovely couple.  I had so much fun reading this book.  I give Caught! a B+ and my recommendation. I’m definitely looking forward to more Shamwell Tales.